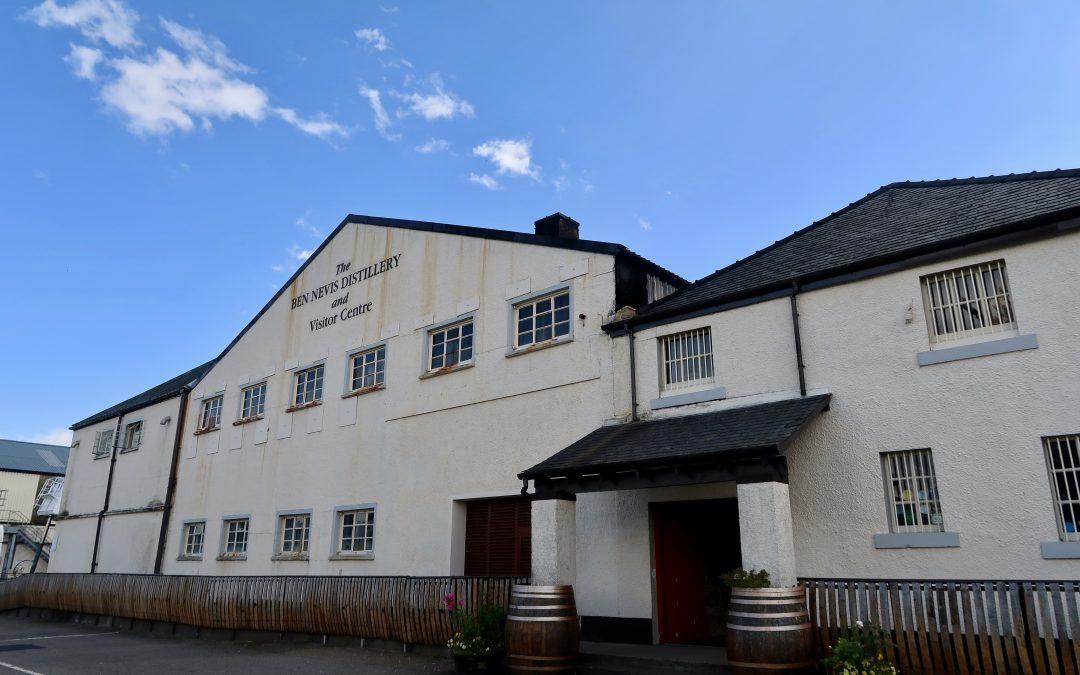 If you’re planning a trip to Scotland, you absolutely must take a Scottish whisky tour! Read on for details about visiting the country’s 2nd oldest distillery, Ben Nevis.

Why take a Scottish Whisky Tour?

Every time I read a story about European monks, I wonder “why the stereotype of them being locked in their monasteries living austere and bland lives?” Take, for example, whiskey’s famous nickname, the “water of life.” This phrase didn’t come from pub-loving modern-day Scots. It came from Irish monks living in the Middle Ages (they called it “uisge beatha“), who discovered what happens when you distill alcohol. God bless those monks.

Now, typically, I’m a wine girl. A glass of Cabernet paired with an elegant cheese plate, or port with some chocolate, seated on an outside patio in springtime is my idea of heaven on earth. To convince me that there may be something better than that would take some work. But what to do when you travel somewhere too far north for grape growing? Well, you drink what the locals drink, which in this case is whisky!

There are a few ways to do this. You could just order whisky at a bar or in a pub. But for the totally inexperienced whisky drinker, this is extremely overwhelming, as my family found out. Because, naturally, waiters expect you to know what you’re doing. When you ask for a glass of whisky and they ask “what type?”, they expect you to have an answer, not a deer-in-the-headlights look at the realization that you have no idea what he means by “type.”

The better option (for the whisky-ignorant) is to take a Scottish Whisky tour at a local distillery. You can learn how whisky is made, the history of Scottish whisky and, most importantly, taste several whiskeys.

(Fun fact side note: “Whisky” or “whiskey?” Since I’m writing from the US, my spell check was having a conniption when I was putting this post together because it insists that it must be spelled “whiskey.” But whiskey with an “e” is used to refer to Irish and American whiskeys, while “whisky” without the “e” is used to refer to Scotch. It’s related to how the Irish and Scots translated the word differently from the original Gaelic. Since we’re talking about Scotch here, “whisky” is the proper spelling. Deal with it, spell-check.)

When we tried, and failed, at ordering whisky in a restaurant, we realized visiting a distillery was what we needed to do if we wanted to really understand this whole scotch whisky thing. Fortunately, Scotland has almost as many distilleries as it does sheep (ok, maybe an exaggeration, but not really).

But it was Ben Nevis Distillery that came to the rescue in our time of need. Nestled at the foot of the United Kingdom’s tallest mountain, Ben Nevis, we practically stumbled upon the distillery on our way from the Isle of Skye to Glen Coe. 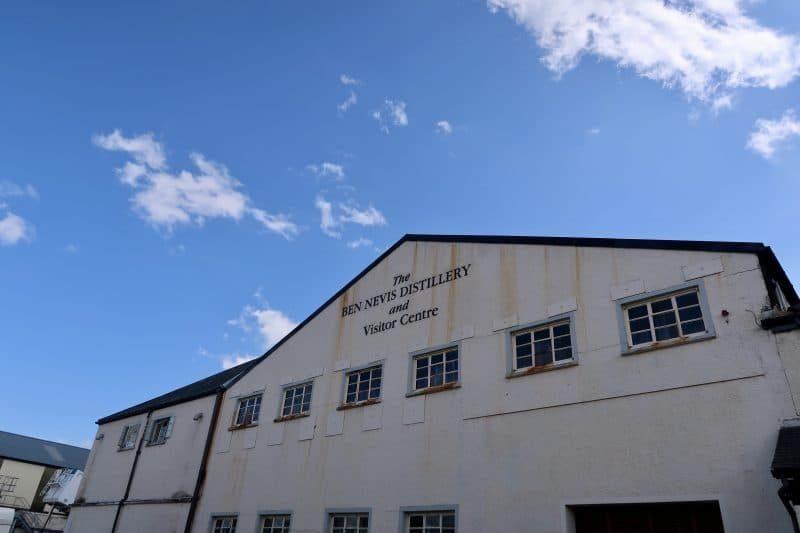 Many distilleries in Scotland require reservations, particularly during the busy tourist season. But Ben Nevis isn’t on the famous “malt whisky trail” in eastern Scotland, so even though they’re one of the oldest licensed distilleries (circa 1825!) in Scotland and produce a great product, reservations aren’t required. Which was good news for us, since we basically walked in and said: “please teach us about whisky because we know nothing.” 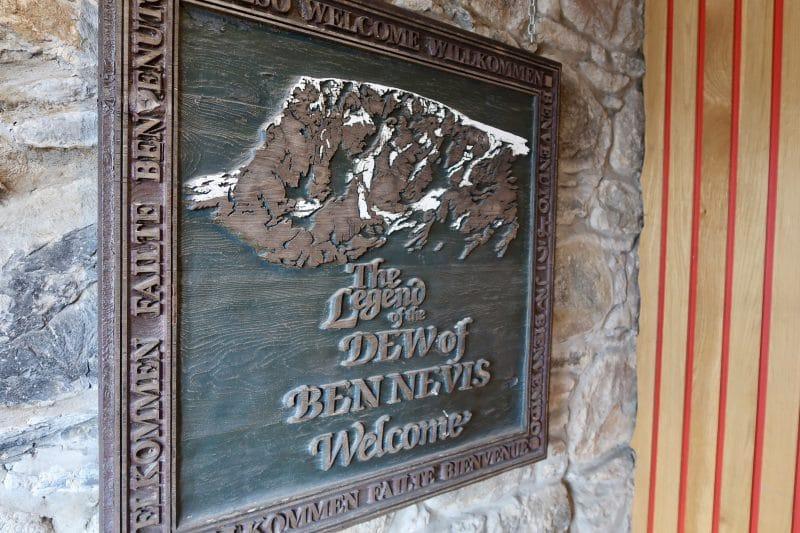 The tour started with a video presentation about the “Legend of the Dew of Ben Nevis,” which, though decidedly NOT about how to properly order or drink whisky, was an entertaining introduction to the distillery. The Scots love their legends, and this whisky facility is no exception. But I won’t spoil the film – you’ll just have to visit and watch it yourself!

After the film, we got to tour the facility itself, led by self-proclaimed whisky aficionado Gordon. Because Ben Nevis Distillery is an actual working distillery, we got to see the whisky production process in action. At the first stop on the tour, we got to watch a trailer truck deliver a shipment of fresh grain to the malting room. It takes about 220 pounds to make 21 liters of whisky, so a distillery goes through quite a bit of grain! Whisky can be made using corn, rye, wheat, or barley, but most Scottish whiskeys use barley.

From the malting room, Gordon took us to see the next part of the production – mashing. Mashing extracts the sugars from the grain, which has to be done before fermentation. Our tour guide let us peer into the large metal tank where the ground up grains were actively being turned into “mash” (mashed up grains – I know, super creative haha). 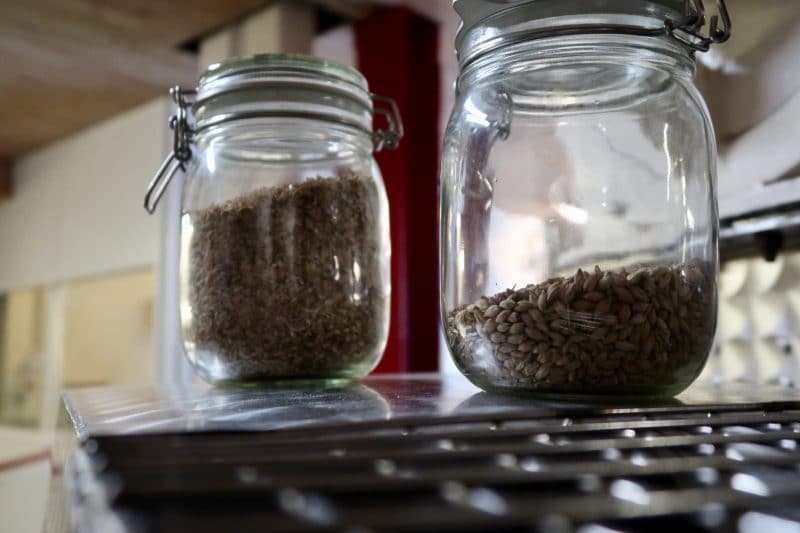 Grains before and after being ground up

After the grains are mashed, they’re fermented. Fermentation happens when the “mash” is introduced to yeast, which transforms all the sugars in the liquid into alcohol. The process can take anywhere from 48 to 96 hours. The resulting liquid is very beer-like (in fact, it’s usually called “distiller’s beer”) and only has about 7-10% ABV, much lower than finished whisky.

Traditionally all distilleries used wooden barrels for the fermentation process, like the one in the picture below. But most whisky makers have moved to steel barrels because they last much longer. However, Ben Nevis still has a couple of wooden barrels for nostalgic reasons (and curious tourists), in addition to their more modern stainless steel containers. 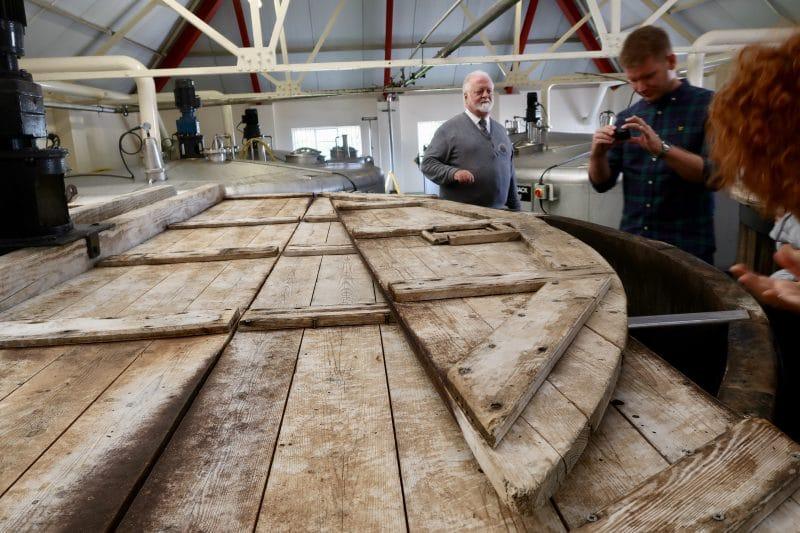 Peeking into a fermentation barrel

After it’s fermented, the liquid is distilled. Distillation increases the alcohol content of the liquid and removes any volatile components. I’m no scientist, and this is by far the most complex part of the whisky-making process. So instead of attempting to explain how it works, I’ll give the TL;DR version: at the end of the distillation process, what’s left is a more stable liquid, with all of the notes and aromas the whisky maker is looking for. At Ben Nevis, an entire warehouse was dedicated to the distillation process – those copper machines are massive! 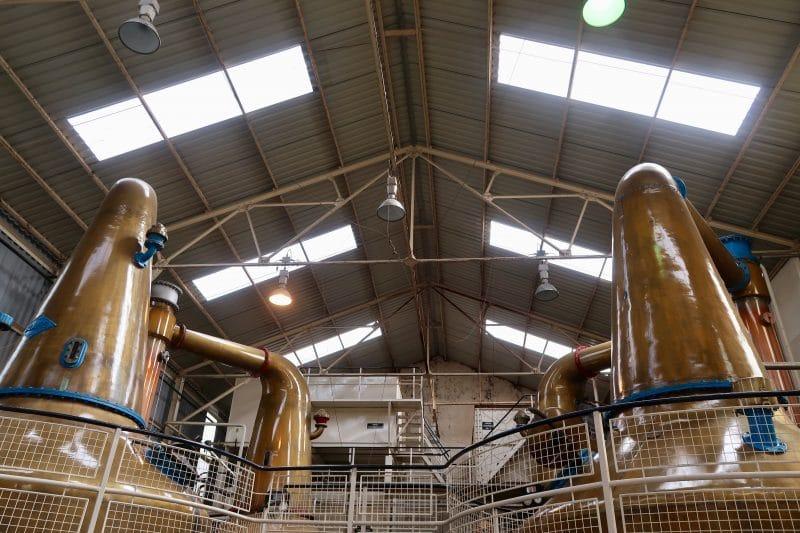 Like wine, the last step in the process is barrel aging. Aside from the tasting, this was the part of the tour I learned the most about different types of whiskeys and their labels.

Barrels are stored in warehouses while the whisky ages for a minimum of three years. Whisky age labels can be very misleading though. When you buy a bottle, many will say that they’re “10-year” whiskies, etc. But that doesn’t mean the whisky is actually 10-years old. It means that the youngest whisky in the bottle is 10 years old; the rest of the liquid in the bottle could actually be much older. An age statement says more about the blend of whisky than it does the actual age.

In the case of Scotch, most barrels are either new American oak or Bourbon barrels. Bourbon barrels can only be used for bourbon once, but still have plenty of years of use left in them. So they get shipped to whiskey distilleries in other countries, like Scotland, to make other types of whisky.

Related: Take a day trip to Islay or Fort Augustus for even more whisky tasting!

The differences between whiskeys was something else I learned. For example, bourbon. Bourbon, by definition, can only be made in the U.S. and is made from mostly corn. Whereas Scotch is not a particular type of whisky, but in order to be called Scotch, a whisky must be made in Scotland. So if you see a Scotch from a non-Scottish distillery, it’s a lie. The same goes for bourbons from outside the U.S. Who knew?! Not me! 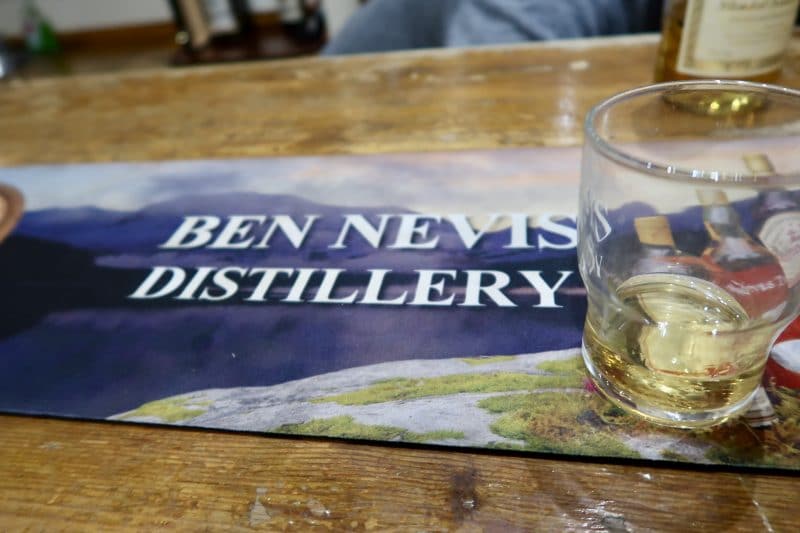 The last (and most important) part of a Scottish whisky tour is the tasting. At Ben Nevis, you can sign up for either one tasting or three. My family and I opted for the three; after all, we wanted to leave this place being experts on whisky!

After our tasting, we asked Gordon what his favorite type of whisky was. His response? “My favorite thing about whisky is that it can take a lifetime to find that out and I still have a few good decades left!”

I enjoyed all the whiskeys we tasted, but I don’t know if I found a favorite. But Gordon’s right – I have plenty of time, and our goal of at least knowing how to order a glass in a pub was accomplished!

Be sure to include a Scottish whisky tour as part of your Scotland itinerary! 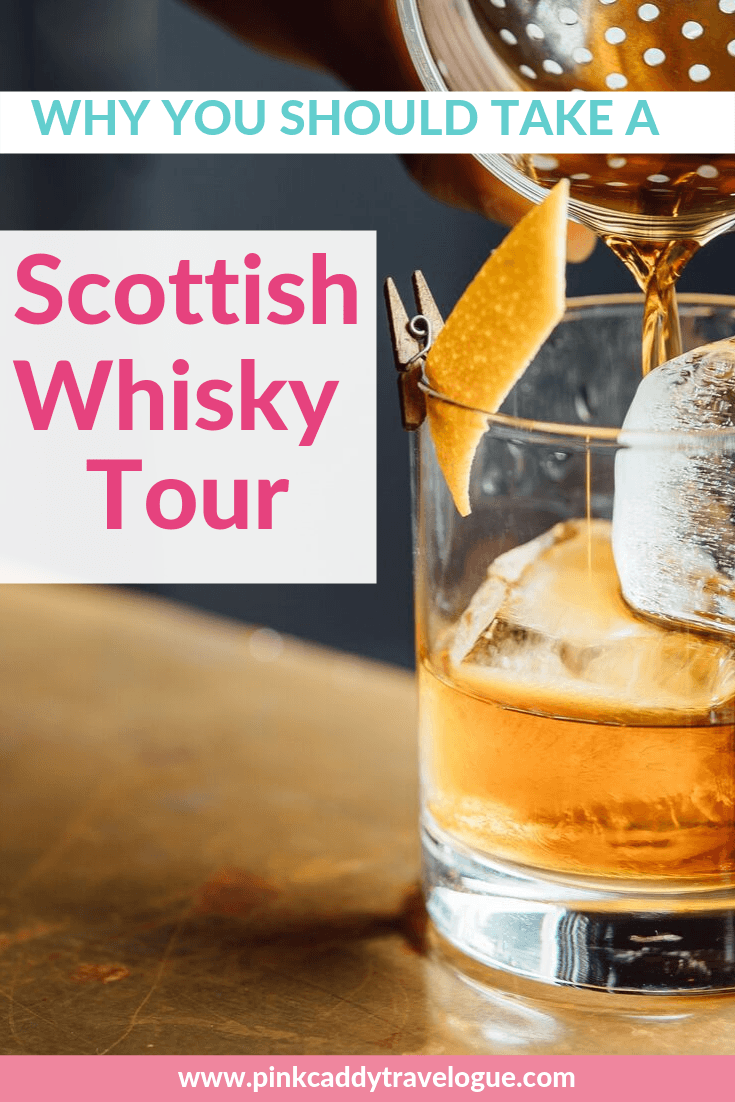