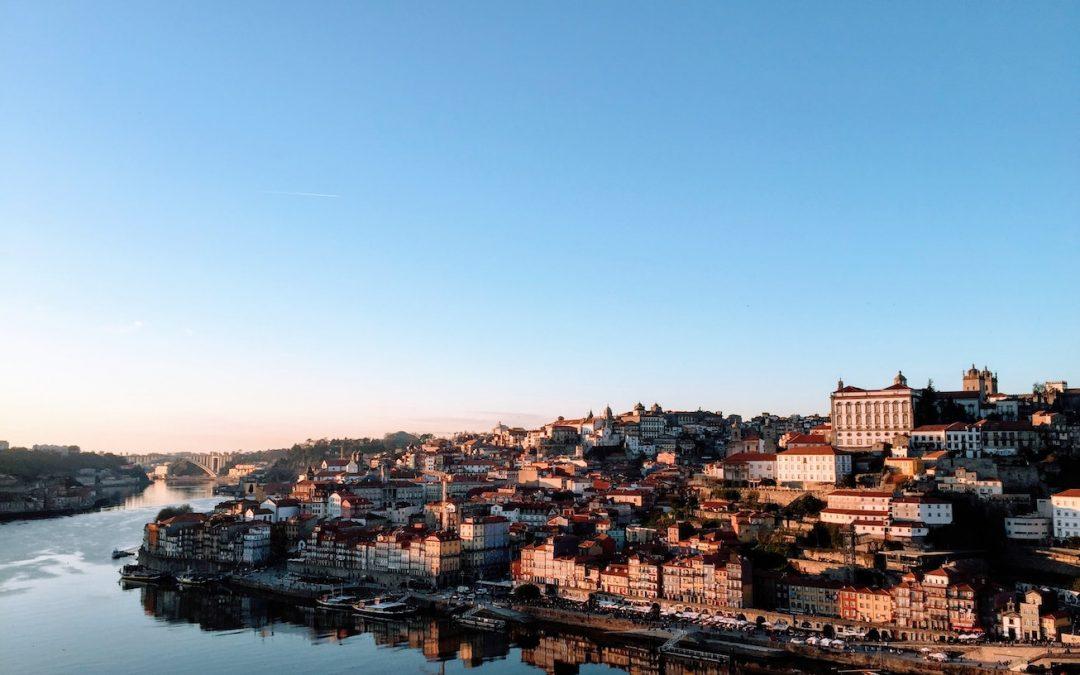 Headed to Portugal’s second-largest city? Check out this review of some great Porto wine tours!

Fun fact: there is not a single port cellar in Porto. Yep, you read that right. All of the port produced in Portugal is actually stored across the river from Porto, in the town of Vila Nova de Gaia. But, Gaia is so close to Porto that the distinction is only important if you’re trying to mail something. Otherwise, it’s completely acceptable to say that you want to visit a port cellar in Porto.

Which, you definitely want to do. A first-time visit to Porto is not complete without tasting Portugal’s most famous export – port wine. And Porto (or Gaia) is the best place to do that! Dozens of port producers call the city home. Their cellars and tasting rooms are strategically located on the banks of the Douro River so that, traditionally, the barrels of wine produced upriver in the Douro Valley could be easily rolled off the ships and right into the Porto warehouses for storage.

Porto’s riverside is lined with flags and signs and billboards marking the presence of the plethora of wine cellars. But with so many cellars to choose from to visit, how do you know which Porto wine tours are the best?!

Because my mom and I only spent one full day in Porto, and we didn’t want to spend ALL of our time drinking port (not that that would have been a terrible thing to do), I can’t give you a rundown of every available port tour option. But, I CAN give you a review of the two that we went on. (Spoiler alert: both were fabulous and I highly recommend them!) So read on to learn more about two great, but very different, Porto wine tours! 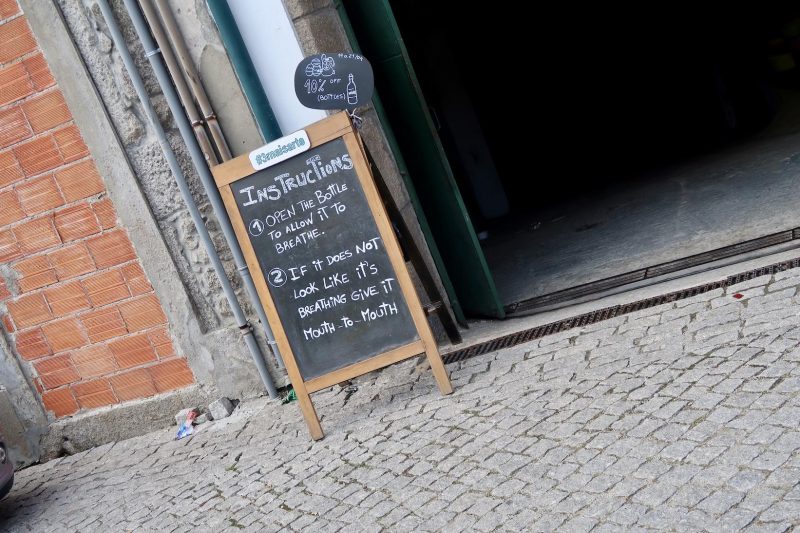 A Brief History of Port

Despite the pride that the Portuguese take in Port, the beverage is actually a British invention. Because the damp and gloomy weather that plagues the British Isles prevents them from being suitable for grape growing, the Brits used to import their wine from France. That is, until their numerous wars with the French in the 17th and 18th centuries forced wine-loving Brits had to find another alternative. So, they turned their eyes farther south, to wine-producing Spain and Portugal. But there was a problem: wines from these countries never lasted long enough to make the long sea journey back to Britain. That problem was solved when a pair of brothers tried fortifying the wine with grape brandy to extend its shelf life.

This history explains why so many of the port producers have English sounding names, rather than Portuguese (Croft, Taylor, Graham, etc.) Of those, Croft is the oldest. Founded in 1588, they are the oldest port cellar still in operation. And their cellar, naturally, is the oldest continually operating one in Porto. So it made sense to start at the very beginning of port history and visit Croft.

Croft’s cellars are tucked away from the main street, several blocks from the riverfront – that means that, despite their long history, they don’t get nearly as much foot-traffic as some of the other cellars. After a long, hot day exploring the hilly streets of Porto, we were perfectly happy to trade the crowds for the cool and quiet of Croft.

Most cellars offer tours in English, Portuguese, and French (and a smattering of other languages), but on a rotating tour schedule. We got to Croft about 30 minutes before the English tour was due to start, but that wasn’t a problem – my mom and I were perfectly happy, hanging out in Croft’s beautiful, air-conditioned lobby, sipping on a complimentary glass of port that staff had given to us. 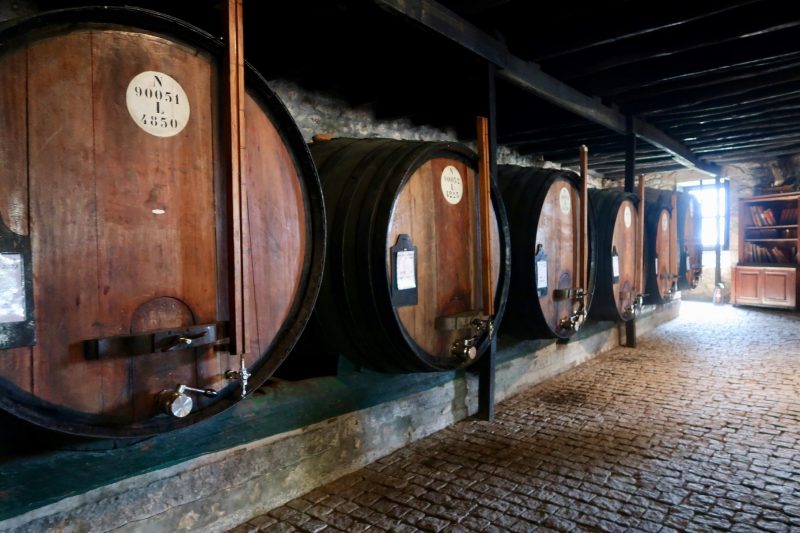 By the time the tour started, we had been joined by just a few other Americans, other tourists determined to get off-the-beaten port cellar path. The small group size made everyone feel free to ask questions, and gave our tour guide the time to elaborate on facts about port we hadn’t heard before and fun stories about the winery itself. 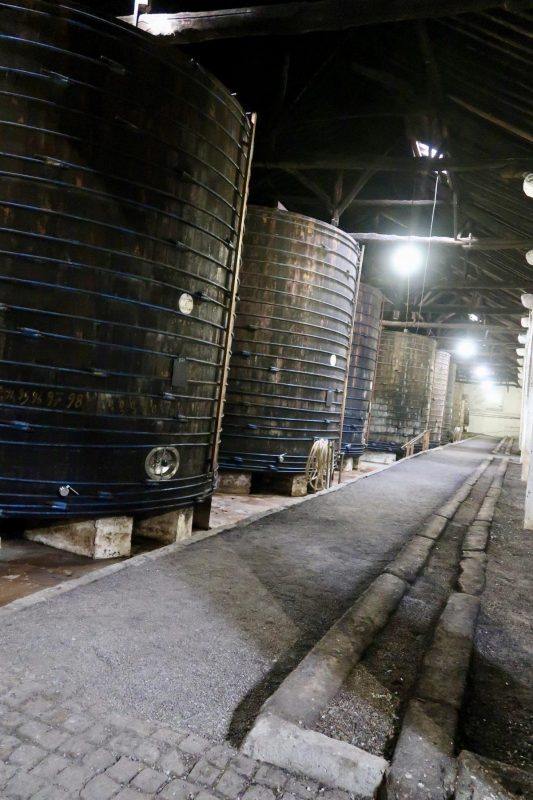 Each of these vats can be used for over 100 years!

The 45-minute tour took us through the centuries’ old warehouse (which still has the same flooring as when it first opened!), and our guide explained the various different types of port aging in Croft’s cellars and how those ports are produced. At the end, she quizzed us on what we had learned about the characteristic flavor notes for each port by giving us a tasting from an unmarked barrel (we didn’t completely fail, so we must have learned something LOL). 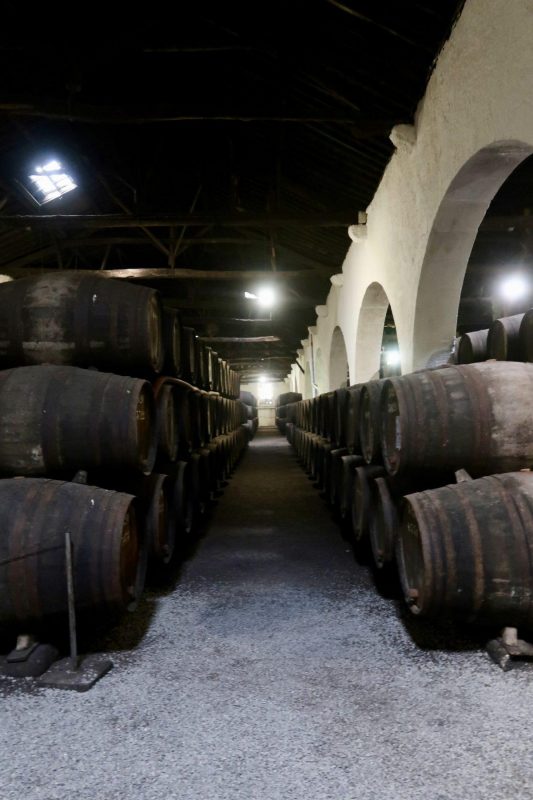 The tour ended back in Croft’s lobby, and from there we were free to enjoy our three complementary tastings either out on the patio or in the lobby. The whole experience was relaxing, informative, and the perfect end to a packed day in Porto. 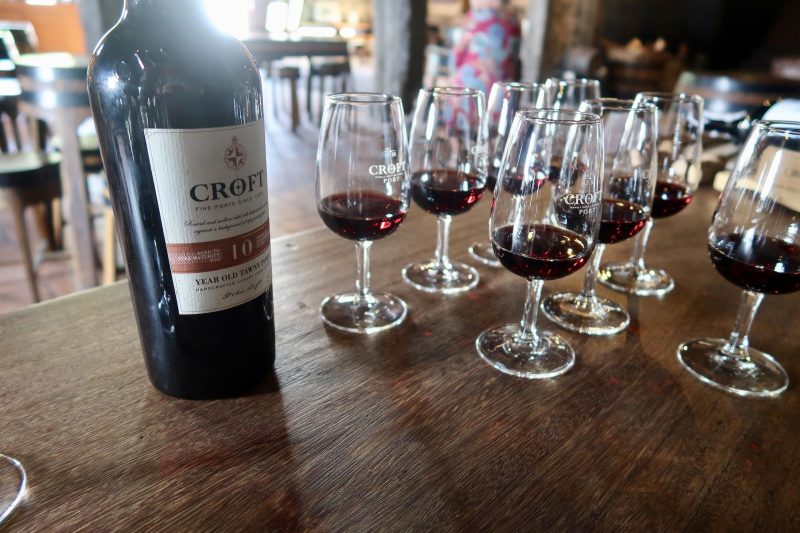 While not the oldest, Sandeman is, perhaps, the most famous of all port companies, thanks to the fact that they were the first port company to actually market their products and is one of the oldest brands (of ANY brand, not just port), in the world. Their name is everywhere in Portugal – plastered on the sides of city buildings, on top of Douro valley hills, and advertised in every market, grocery store, and restaurant. Their logo, which features a Spanish sombrero (for their sherry) and a Portuguese student cape (for their port) is recognized around the world. And their cellar is located right along the Douro River in Gaia, the hot zone for tourist foot traffic.

We typically try to avoid big-name brands and places we know are popular with tourists. But after seeing the name literally EVERYWHERE in Portugal, we were curious – “what’s the big deal with Sandeman and why are they so special?!” So, we thought to experience both sides of the port-producing world – smaller, less well-known vs. mass-producing famous company – a trip to Sandeman would be an interesting follow-up to Croft. 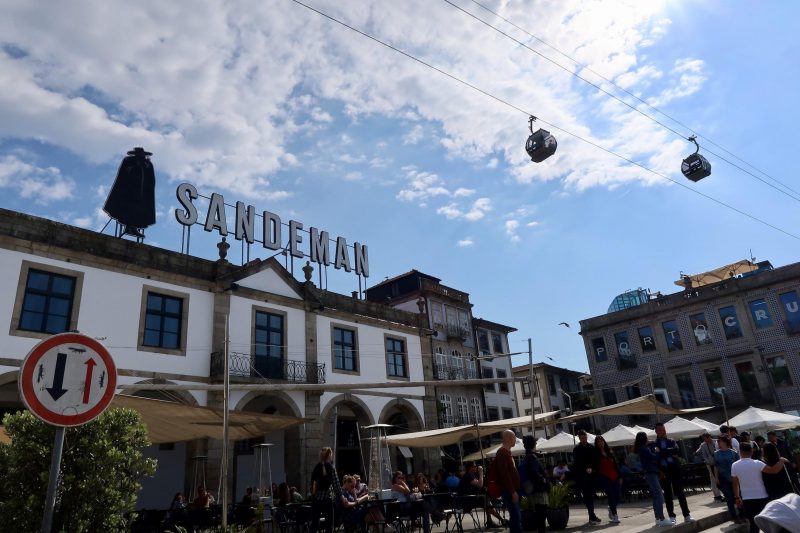 Because we had been able to walk in and immediately join a tour at Croft, we thought we could do the same thing at Sandeman – but that was not the case. When we arrived, we had to get on a list for a tour that would happen two hours later. If you’re on a tight schedule, that may be a problem; but we got drinks at Sandeman’s outdoor patio bar and just hung out until our tour time. 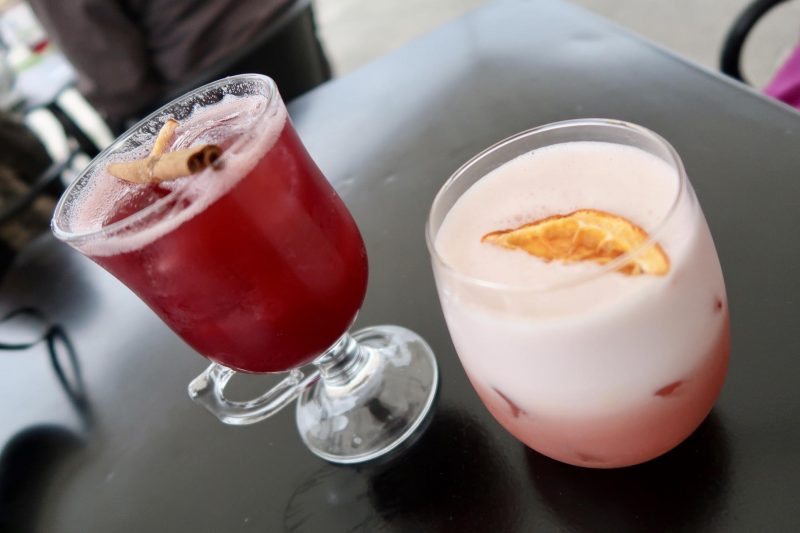 Also unlike Croft, this Porto wine tour was packed. We were joined by at least 30 other people. Because of the number of visitors that Sandeman gets, the tours run on a tight schedule and guides stick to their scripts. 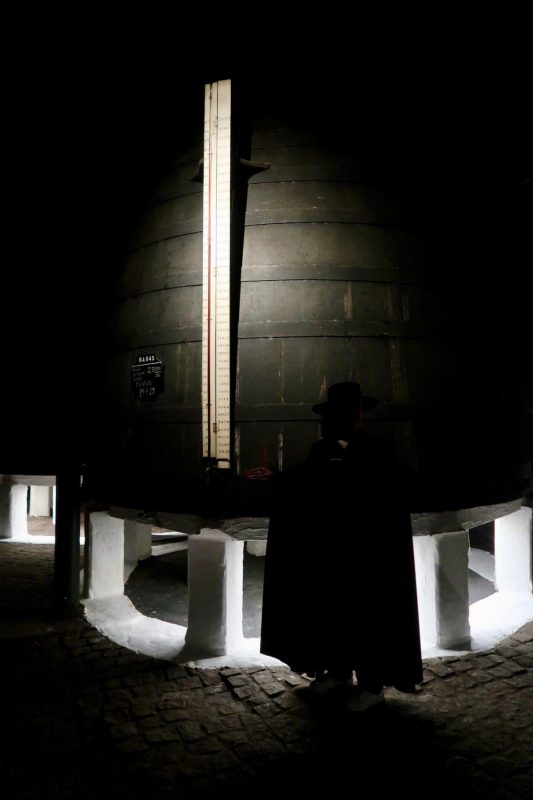 It’s dark, but the tour guides dress like the logo – with a sombrero and cape

But that doesn’t mean the tour was unpleasant! Sandeman has the distinction of putting port on the worldwide map; they aren’t going to ruin their popularity by disappointing the hundreds of tourists that visit their cellars each day. 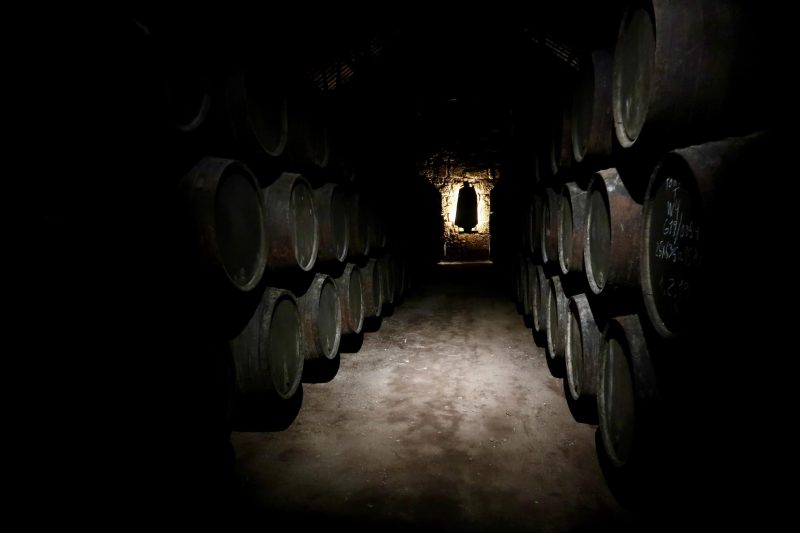 Sandeman has an incredible facility – far larger and more artistically laid out than Croft’s. They have a room dedicated to their oldest vintages, with bottles dating back to the 1890s. They also have an exhibit of port bottles that demonstrates the evolution of glass-blowing and bottle standardization. These were interesting tidbits that the smaller port cellars, like Croft, don’t have. 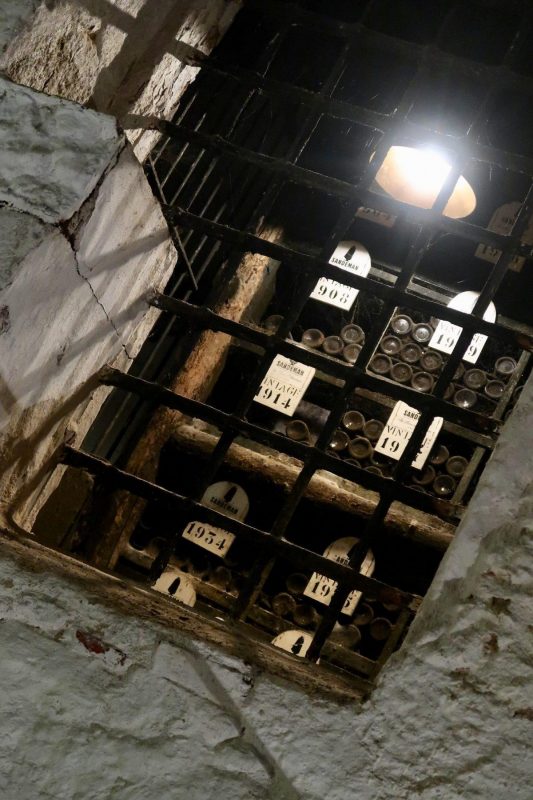 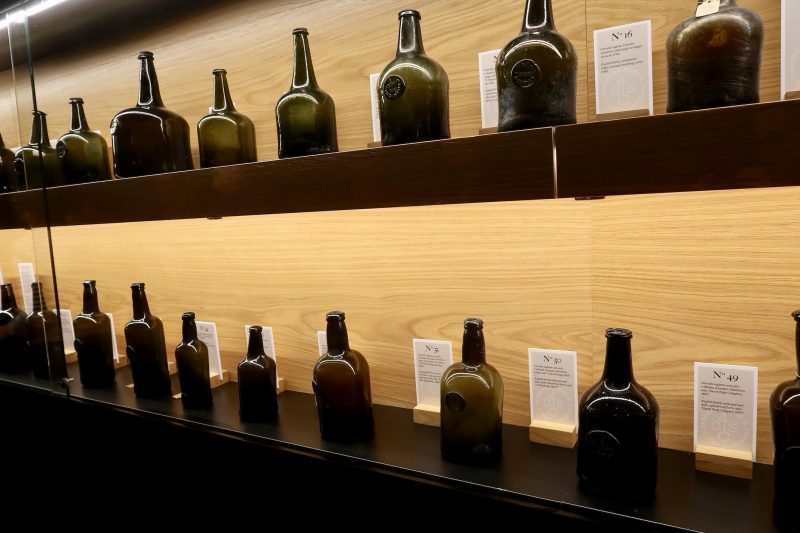 The evolution of glass port bottles over time

After the warehouse tour, we were seated inside Sandeman’s tasting room (which is, coincidentally, adjacent to the gift shop) for a tasting of two of their ports. And after discovering that their port really is VERY good, we were set loose in said gift shop. An effective marketing strategy on their part, because we ended up leaving with a bottle of Tawny to take home!

While Sandeman was far more commercial (and a little gimmicky) than Croft, it was still an excellent Porto wine tour. We got to learn the history behind the name plastered all over the country and gain a deeper appreciation for how such a  popular brand came to be what they are! But if you go, definitely make reservations ahead of time.

There are dozens of port cellars for you to choose from, and you probably can’t go wrong with most of them. But I can tell you that you’ll be in good hands with either one of these Porto wine tours! 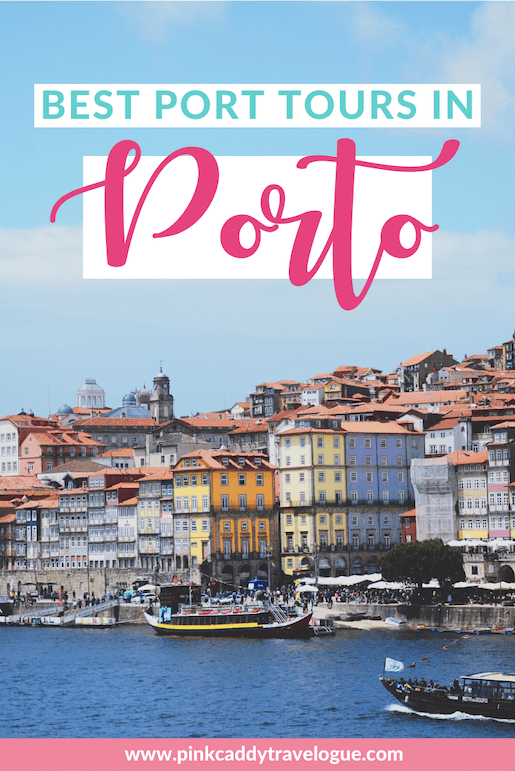 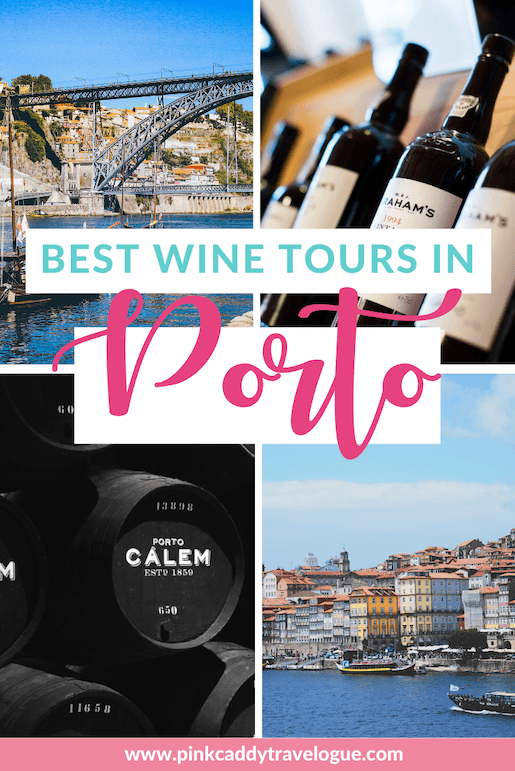 One Day in Porto: The Perfect Itinerary

Best Wineries in the Douro Valley

How to Create an Awesome Vacation Itinerary