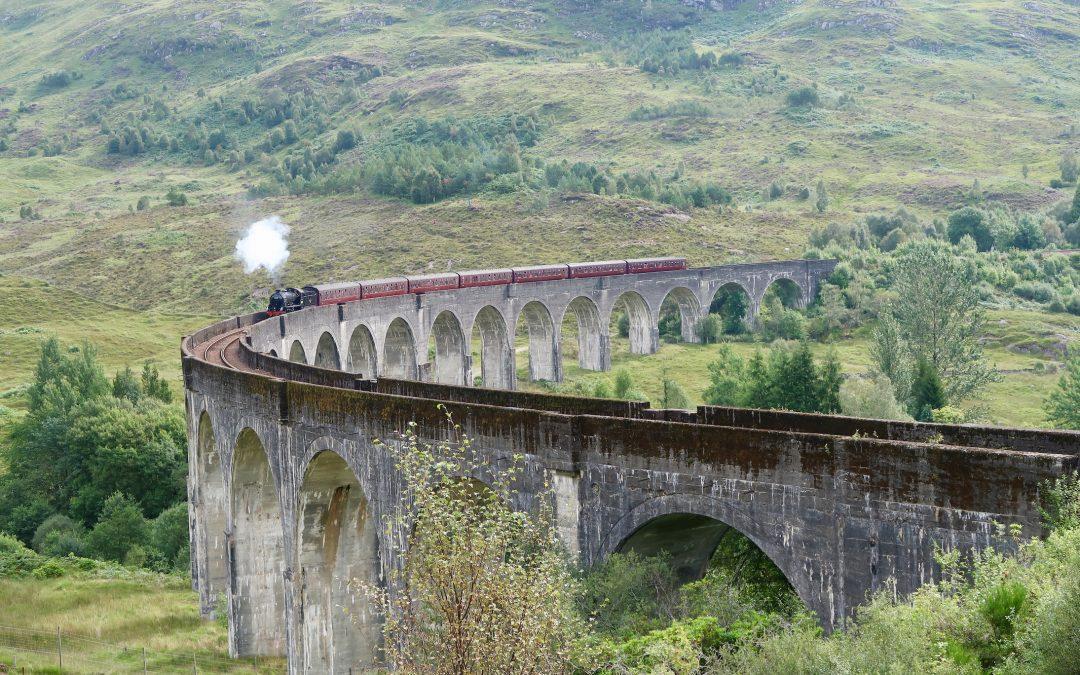 Ever wanted to see the inspiration for the Hogwarts Express in person? Check out this guide for everything you need to know to see the real-life Harry Potter train!

The moment I saw the puff of smoke from the train’s engine appear around the bend across the valley, I was instantly transported back to 2001, as 8-year old me got to watch her favorite book series come to life on the big screen. The clatter of the wheels on the trains, the gray, moody Scottish sky, the surrounding green hills, the loud train whistle – it was just like the movie. But this time, I was seated on one of those hillsides, a mere few hundred feet from that famous black and red train.

As a lifelong Harry Potter nerd, seeing the real-life Harry Potter train was one of the first things I put on my Scotland itinerary. And I’m SO glad I made it work – even my parents agreed that this was one of the highlights of our trip! While seeing the train cross the viaduct does take a little research and planning, it’s 100% worth it if you’re a Harry Potter fan.

Read on for everything you need to know to see the Harry Potter train cross the famous Glenfinnan Viaduct!

About Glenfinnan Viaduct and the Jacobite Steam Train

From the moment the Sorcerer’s Stone premiered in theaters, the Glenfinnan Viaduct and Jacobite Steam Train have been synonymous with the Hogwarts Express. And yes, the train you can see cross the bridge today is the same one that was used to film the movies (though the engine is on display at Universal Studios, one of many Harry Potter things to see in London).

Though it wasn’t world-famous until after it starred in the Harry Potter movies, the Jacobite has actually been operating on the West Highland Line since 1984. After 1967, steam engines were banned along the route in favor of more efficient and reliable diesel locomotives. But in 1984, a steam-hauled service was commissioned as a way to boost tourism in the region. That service was successful, but nowhere near as popular as it is now, post-Harry Potter.

The same can be said of the Glenfinnan Viaduct which, though a beautiful piece of architecture, was never much of a tourist destination until the world watched Harry and co. ride a train across it. Built in 1898, the bridge was, and still is, the largest bridge in Scotland made of mass concrete. Not only is the viaduct itself gorgeous, but it’s located in a stunning corner of the Scottish Highlands. The bridge overlooks picturesque Loch Shiel (also featured in Harry Potter and many other movies) and the Glenfinnan Monument, which was built to commemorate the 1745 launch of the Jacobite Uprising. 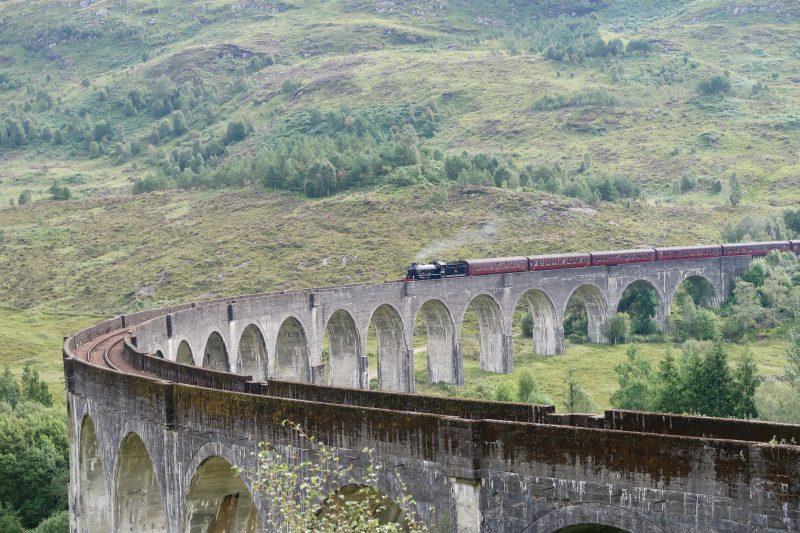 Getting to the Glenfinnan Viaduct

The Glenfinnan Viaduct is located in the small Highlands town of Glenfinnan. It’s 15 miles west of Fort William and 25 miles east of the port town of Mallaig. It’s a very easy drive, as the “Road to the Isles,” A830, runs directly through the town. Check out my tips for driving in Scotland.

Glenfinnan doesn’t just have the famous train bridge – it also has a station! Four trains a day go through Glenfinnan. There’s a walking trail from the station to the viaduct, about half a mile east.

Glenfinnan is on two bus routes from Fort William, operated by Shiel Buses. The journey takes 30 mins; an adult return is £4.30. Bus 500 to Mallaig runs four times a day Monday-Friday, but only once on Saturday and Sunday. Bus 502 to Acharacle only runs once a day Monday-Saturday.

While you can see the viaduct from the road, you’ll need to park (if you arrived via car) in order to walk over to it and wait for the Harry Potter train. The only real parking lot is designated for the nearby Glenfinnan Monument, which you can use if there are any spaces left (it’s €3 to leave your car there). But unless you get there EXTREMELY early, it’ll likely be full. About a quarter to half mile east side of the viaduct is a makeshift dirt lot that you can park in. If that too is full, you can try and park along the road.

Walking to the bridge

There are a number of ways to walk to the bridge itself, but one is the best if you want the classic Harry Potter movie viewpoint.

When you arrive, you may think you should take the path that leads from the Glenfinnan visitor’s center – it looks official, that’s where the main parking lot is, etc. DON’T. Instead, walk past the visitor’s center along the road and across the bridge. On the other side of the road bridge from the visitor’s center is a more private looking road (it had concrete barriers across it when I was there to prevent cars from driving down it). Walk down this road until you reach the base of the viaduct. 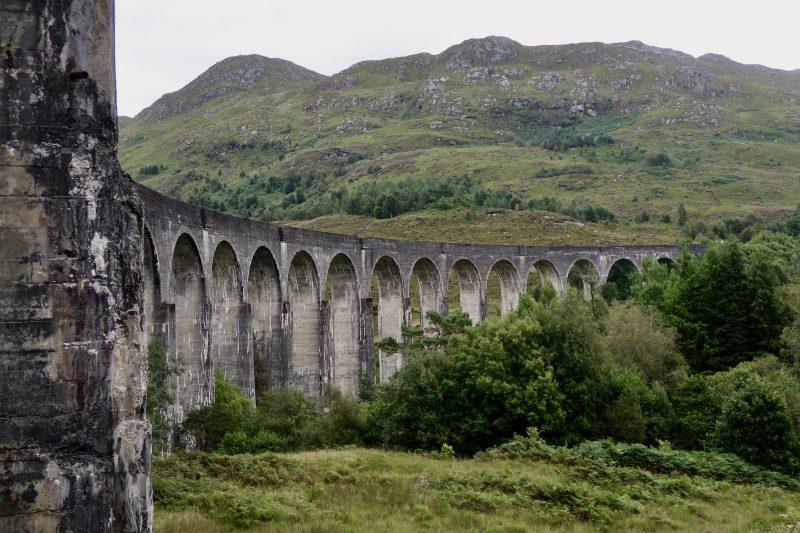 At the base, there’s a trail that goes up the hill to the left. There are signs that say “Viaduct viewpoint” pointing the way. If there’s a gate on the path, you’re in the right place. Walk through the gate, continue up the hill, and find a spot to wait for the Harry Potter train to arrive. 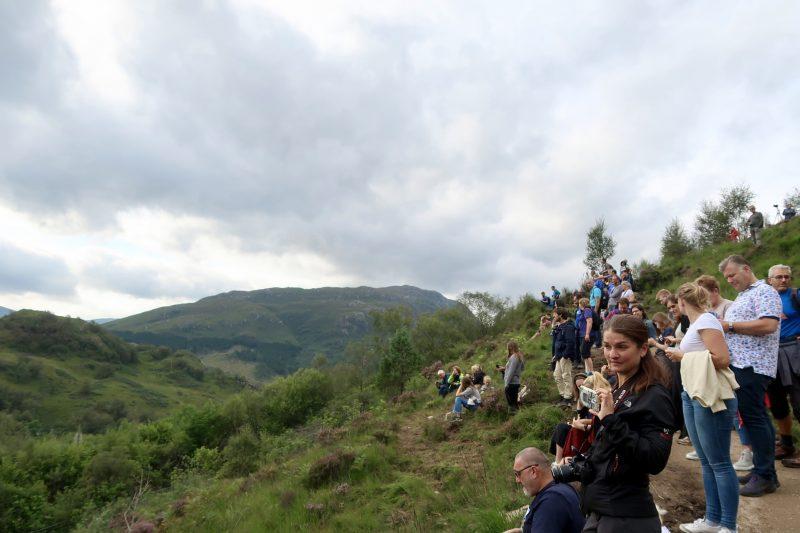 All the fans waiting for the Hogwarts Express!

Timing of the Harry Potter Train

Trains cross the viaduct several times a day, but the Jacobite Steam train, aka the real-life Hogwarts Express, only runs twice a day.

When looking at the train schedule, know that the Jacobite will cross the viaduct about 30-40 minutes after it departs the Fort William station. So if its departure time is 10:15 AM, it’ll be at the Glenfinnan Viaduct around 10:40. Click here for the current timetable.

How early you should get there

When my family went, I hadn’t planned on arriving an entire hour before the train was scheduled to appear. I thought “we’ll just need to park and walk to a viewing area. We don’t need to arrive that early.” Well, I mistakenly underestimated the enthusiasm of my fellow Harry Potter fans and when we accidentally arrived earlier than planned, I was SO glad we hadn’t waited to show up until later.  Had we arrived when I had planned on, we would not have gotten parking, and certainly wouldn’t have had time to actually walk to the bridge and get a viewing spot. So definitely plan on arriving much earlier than the train! 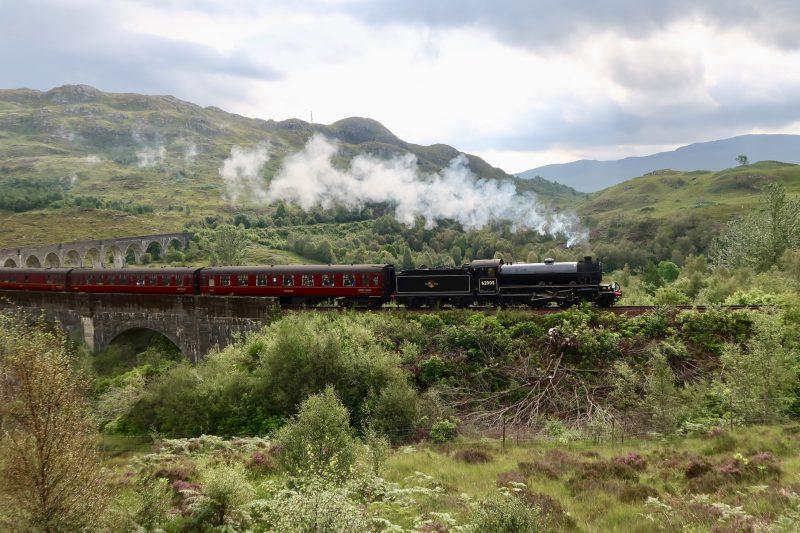 When the puff of steam finally appeared above the trees across the valley, all of us waiting on the hillside were giddy. The train gave a long toot when it came into view. It gave several short whistles in greeting as it curved around towards its waiting fans, and the passengers waved out the windows as the train chugged slowly past us. It was a surreal moment for any Harry Potter fan, and one I’m 100% glad we made time for. So if you find yourself in the Scottish Highlands, make sure you add seeing the real-life Harry Potter train onto your Scotland Itinerary – you won’t regret it! 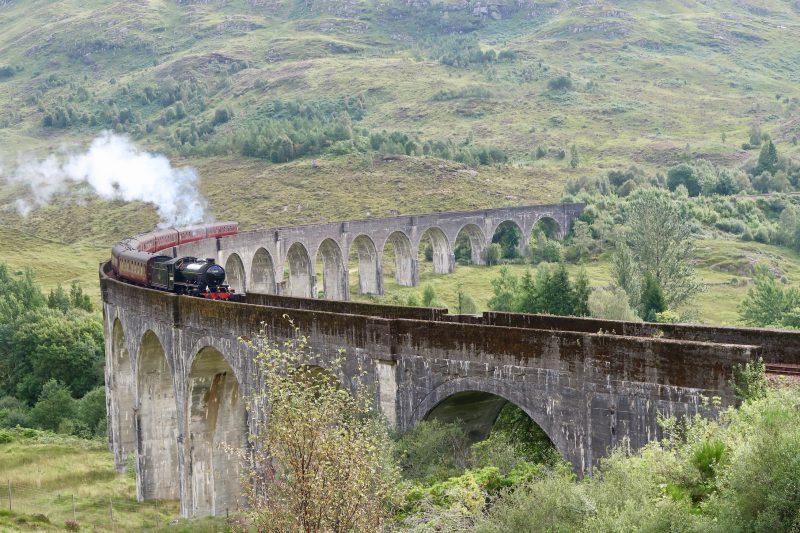 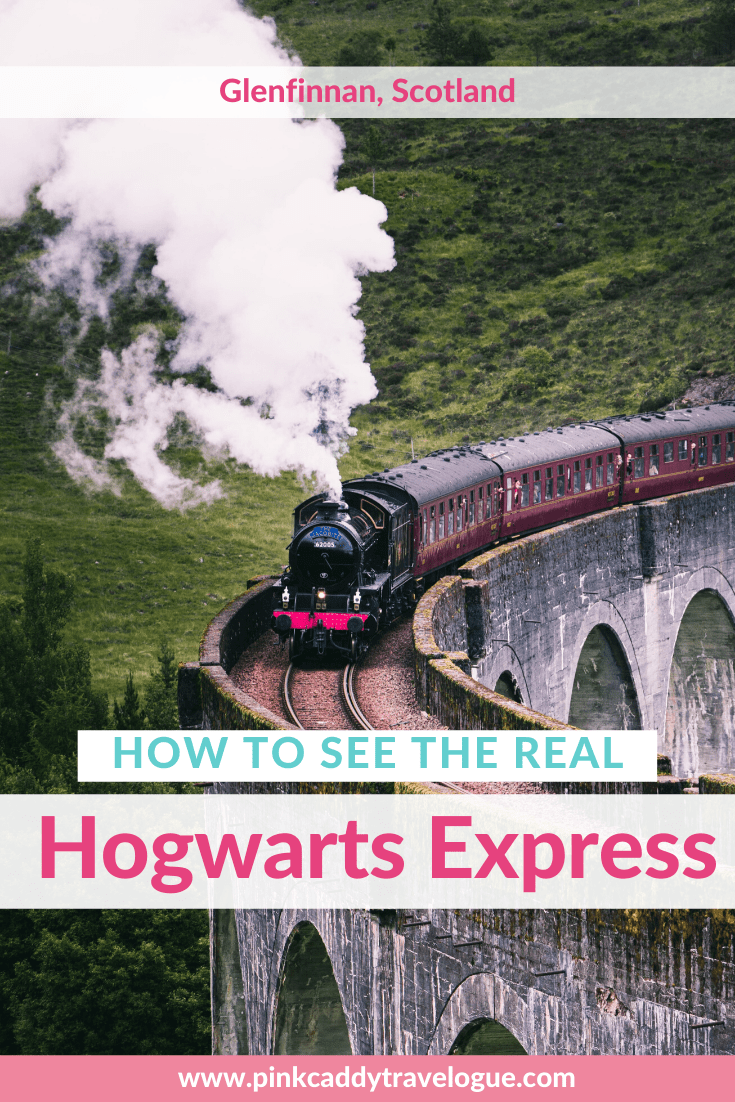 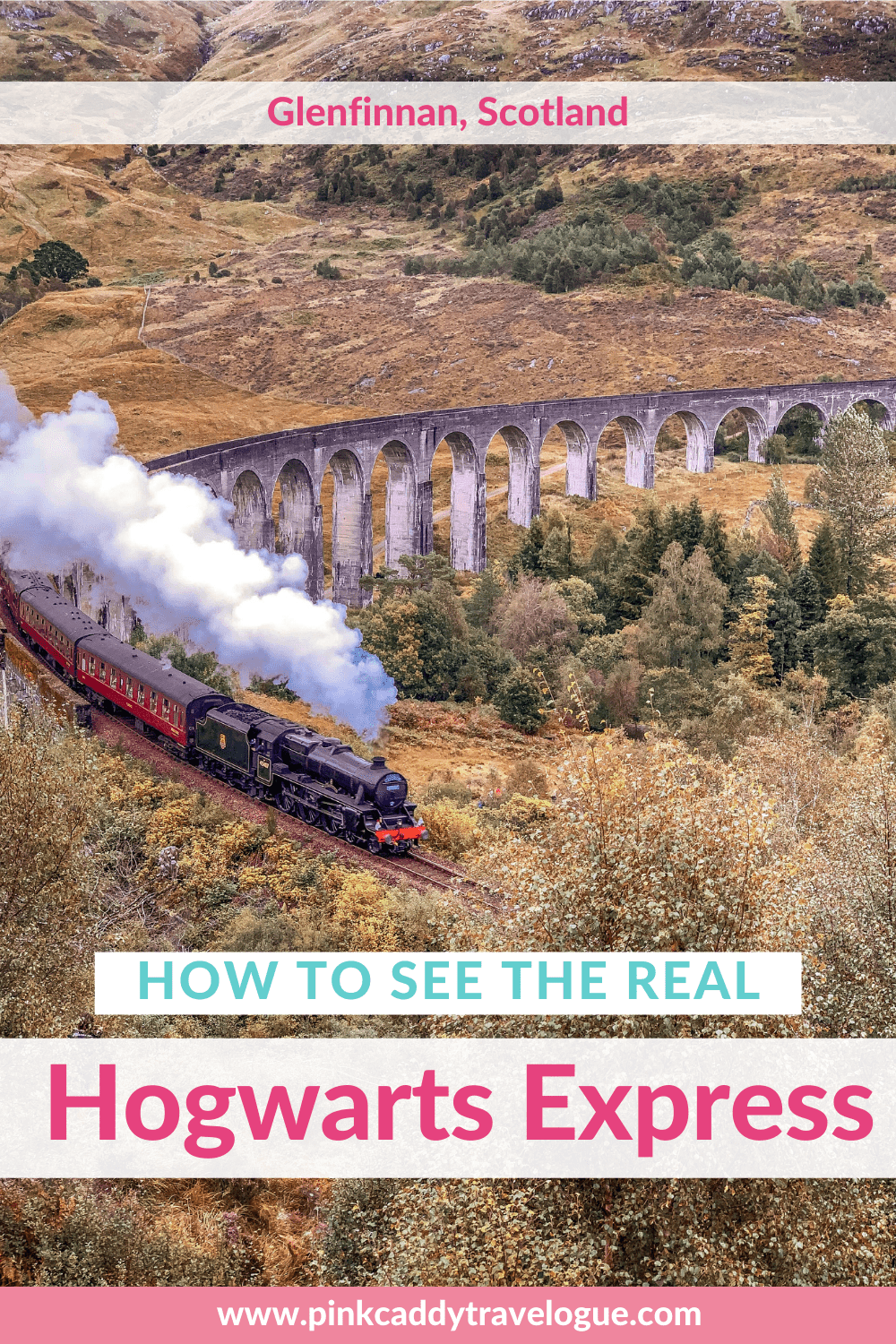 8 Helpful Things to Know About Driving in Scotland