Yes, You CAN Go Hiking in Nebraska: Saddle Rock Trail 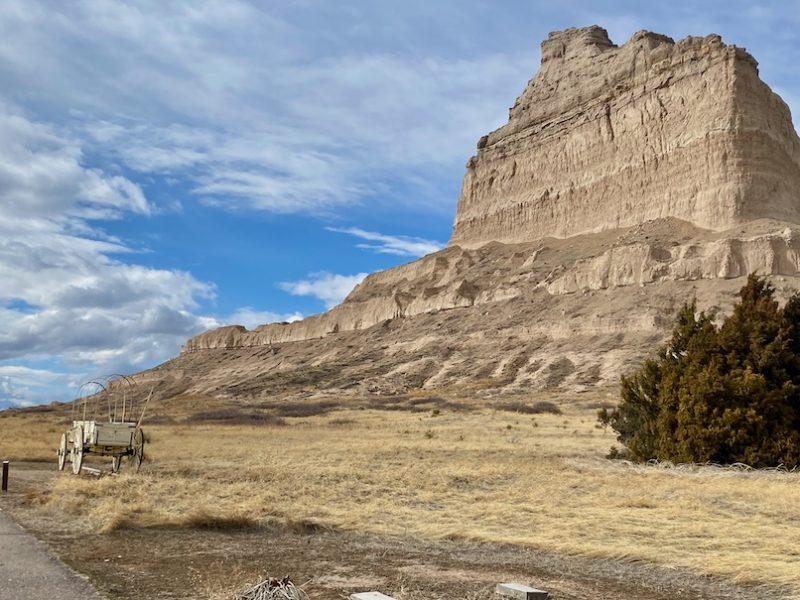 Scotts Bluff National Monument is one of the best places to go hiking in Nebraska. There you’ll find the Saddle Rock Trail, a trail filled with awesome views, a rock tunnel, and an easy way to summit Scotts Bluff itself!

“Hiking” and “Nebraska” are not two words I ever thought I’d put together in a sentence. Now, “Nebraska” and “flat as a pancake” and “neverending fields of wheat” and “why does anyone live here” are definitely phrases that more naturally fit together (no offense to any Nebraskans). So imagine my shock when, on my family’s recent Midwest road trip, Nebraska’s Saddle Rock Trail was one of our favorite hikes of the week!

Saddle Rock Trail is located in western Nebraska in Scotts Bluff National Monument. Towering nearly 800 feet above the North Platte River and the surrounding Nebraska plains, Scotts Bluff has served as an important landmark for centuries – to Native American tribes, westward pioneers, and modern-day road trippers. Back in the day of the Oregon Trail, pioneers would camp and recoup at the base of Scotts Bluff before continuing westward. The bluff itself was named for Hiram Scott – not much is known about him, other than he was a fur trader in the 1800s and was found dead near the base of the bluff in 1828. No one knows how he died, but in the untamed Wild West, it could have been just about anything.

Fortunately, Nebraska is much tamer now, and climbing Scotts Bluff involves less death and more fun. The park’s most popular trail, Saddle Rock Trail takes hikers on a trek across the plains before making the ascent up Scotts Bluff itself. The trail itself is relatively easy and short but offers large payoffs, and proves that outdoor adventure can be found everywhere, even in states like Nebraska.

Things to Know about the Saddle Rock Trail:

The Saddle Rock Trailhead is located to the right of the Visitor’s Center. Just park your car in the visitor’s center parking lot for the duration of your hike.

Alternatively, you can hike from the summit down and then back up. If you choose to do this, drive up the summit road and park your car at the top. The trailhead is about a quarter of a mile to the left of the parking lot.

The trail, which is paved the entire way, begins by meandering through the meadow at the base of Scotts Bluff. In spring and summertime, this field is supposedly filled with wildflowers, but as we were there in March, nothing was blooming yet. In fact, there was snow on the ground and it was extremely windy – definitely felt like we were getting a true Plains experience! 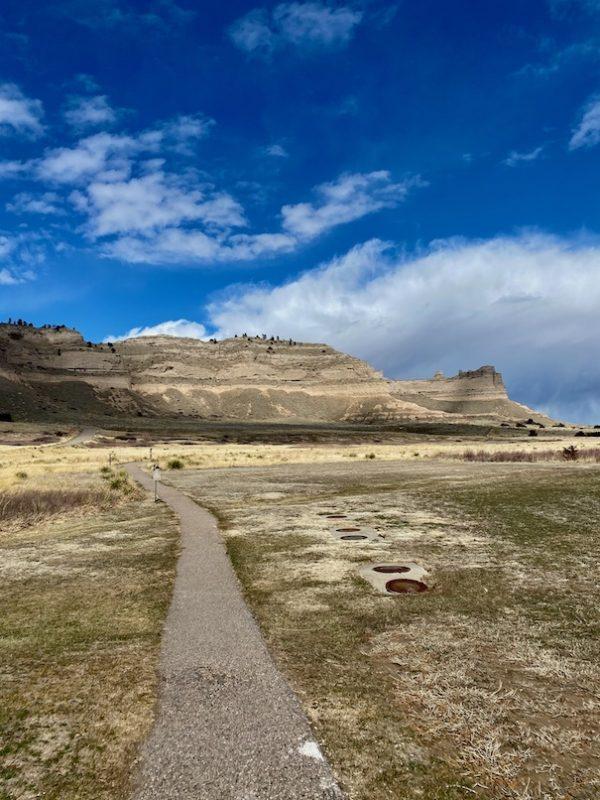 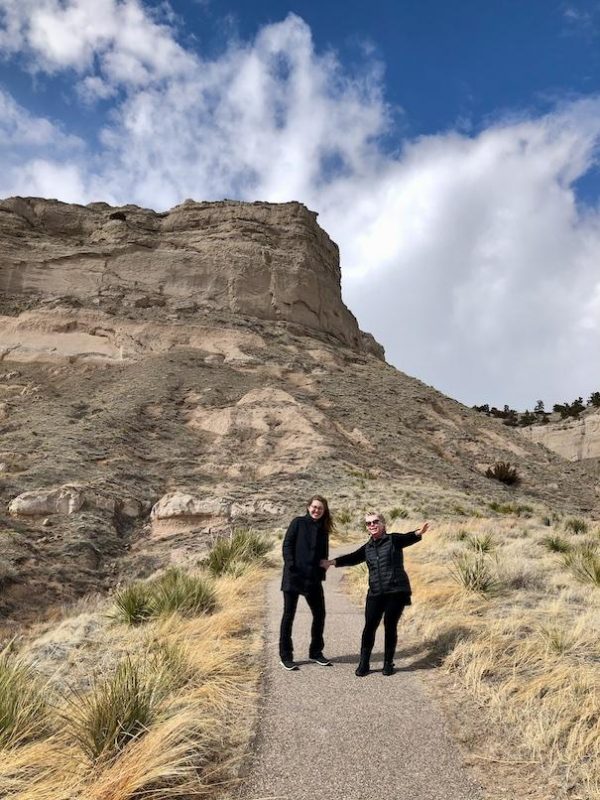 About half a mile in, the trail begins to make its way up the bluff. The ascent is very gradual, and the trail becomes more narrow as it hugs the rock wall. As it moves into a cleft in the bluff, the trail is shaded by the cliff towering over the trail. For us, that meant that there was unmelted snow on the trail. For summer hikers, this is your moment to briefly get out of the sun. 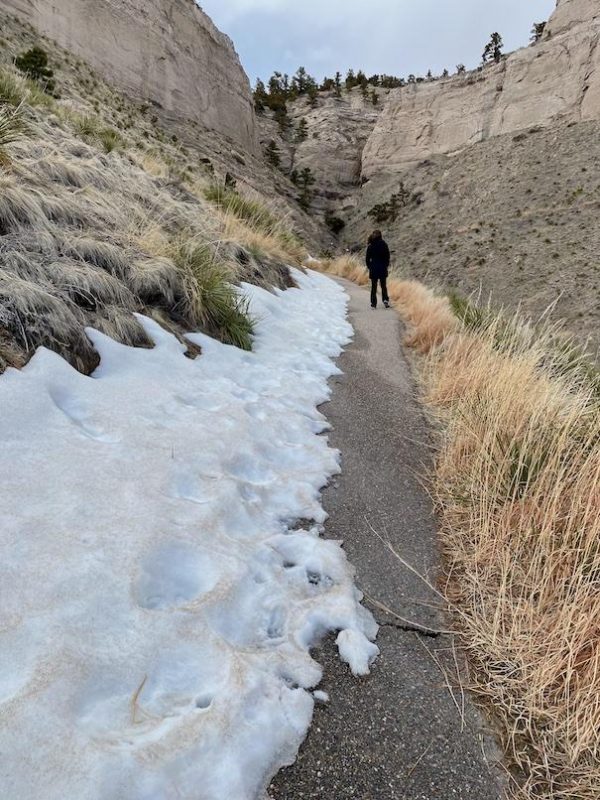 Then the trail makes one switchback before climbing along the northern rock face. Here it gets a little bit steeper, but if you need to take a break, take the opportunity to check out the views and see how far you’ve already come! See, hiking in Nebraska really does come with views. And then reward yourself for reaching halfway by walking through the super cool rock tunnel to the bluff’s other side. 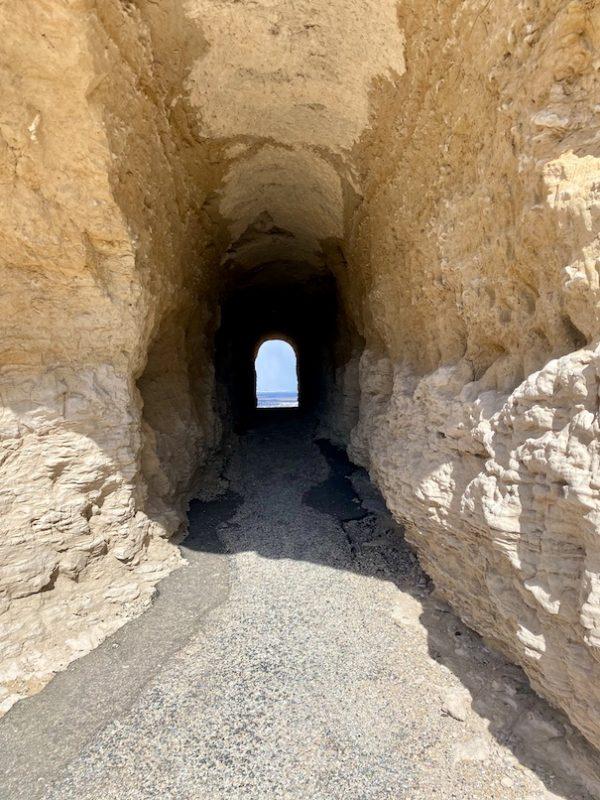 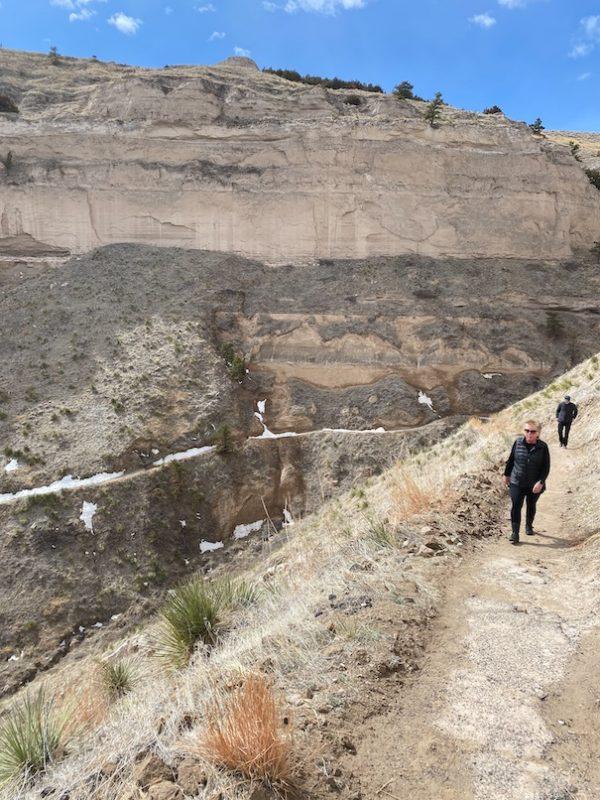 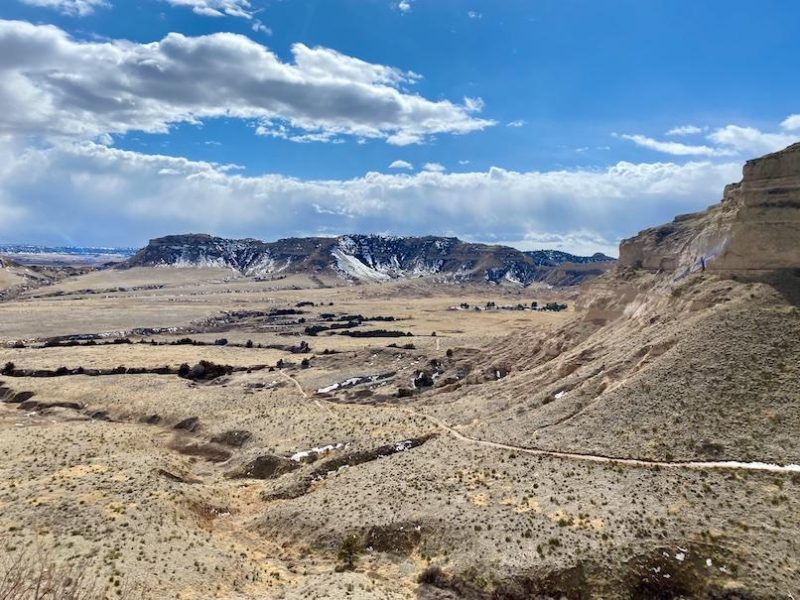 Once on the other side of the bluff, the trail continues its ascent via a series of switchbacks, but it’s not any steeper than what you’ve already done. At the end of this section, you’ll reach the trail’s namesake – Saddle Rock! Unfortunately, you can’t actually walk out to it because the sandstone is very unstable (and they’re serious about it, unlike at Old Man of Storr), but you can get some cool shots from the trail. 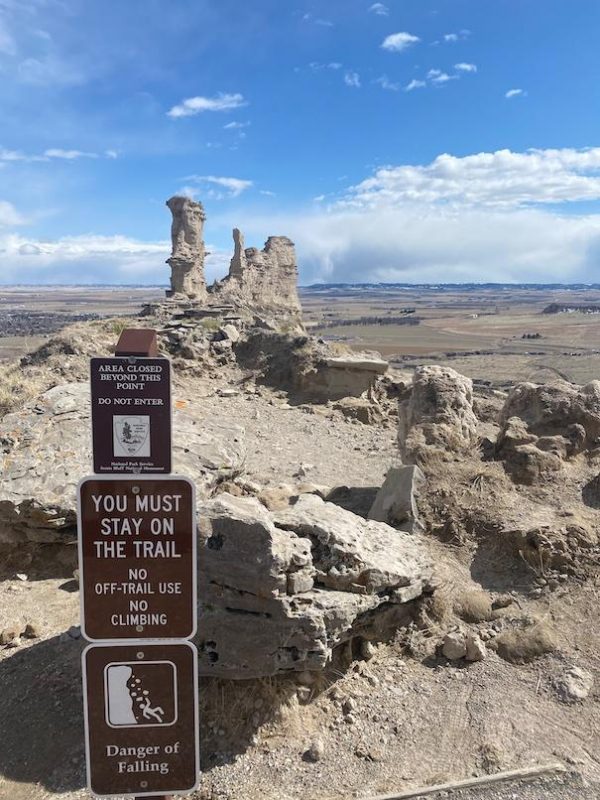 Another half mile past Saddle Rock will bring you to the top of Scotts Bluff itself. The Saddle Rock Trail officially ends here, but there are a few short trails with interpretative signs that you can follow around the top of the bluff. One particularly interesting spot on the summit shows just how much the bluff has been eroded by weather in the past few decades. Then once you’re done exploring the summit, just retrace your steps and hike back down the trail! 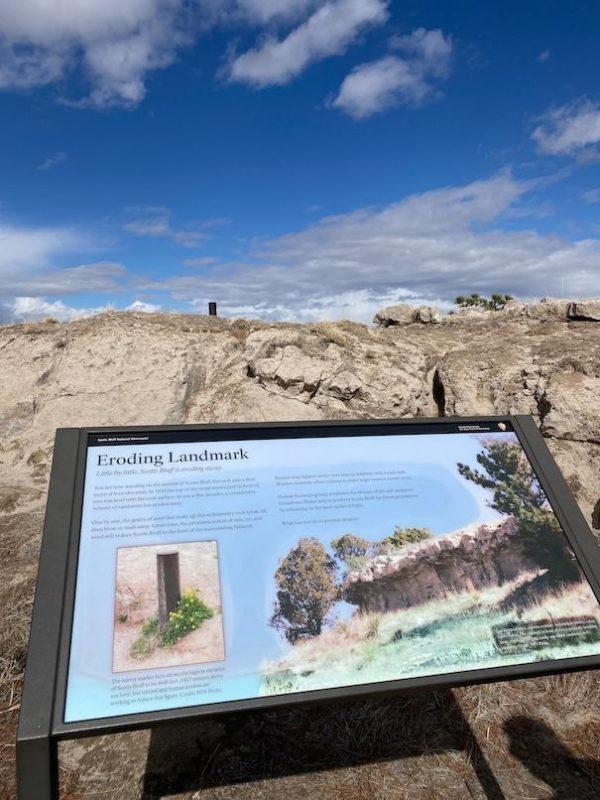 See the black pipe thing sticking out of the rock? The bluff used to come up to the top of the pipe, but over time weather has eroded the rock and now more of the pipe is sticking out 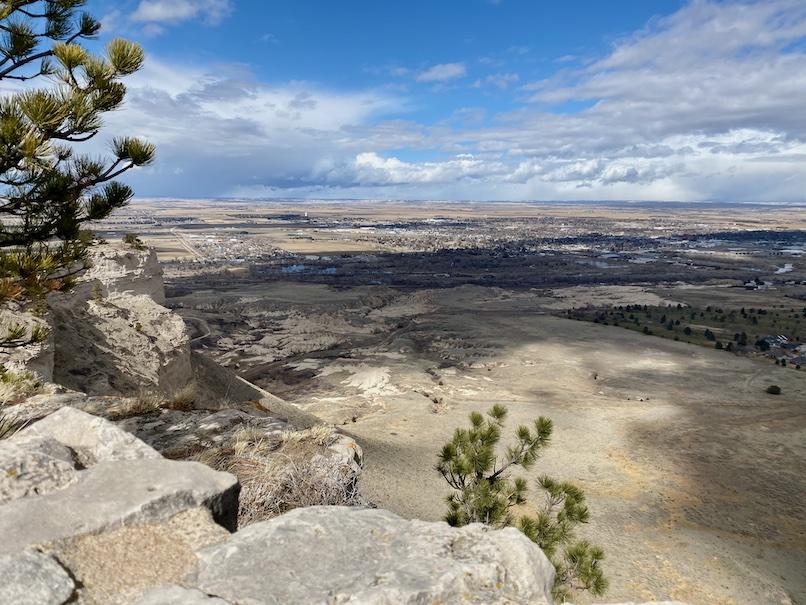 Looking out over the town of Scottsbluff

As it turns out, hiking in Nebraska really is a thing, and an activity worth doing! The Saddle Rock Trail was just the right amount of difficulty for a short afternoon trek, and it came with expansive prairie views and the opportunity to walk through a tunnel in the rock. Be sure to check it out if you ever find yourself in western Nebraska.

Where to Stay Near Saddle Rock Trail

The towns of Scotts Bluff and Gering are just a few miles from Scotts Bluff National Monument. You won’t find anything fancy, but there are plenty of budget-friendly places to stay. My family stayed at Arcadia Hotel, which was a quirky but friendly, clean, and comfortable place for the night. 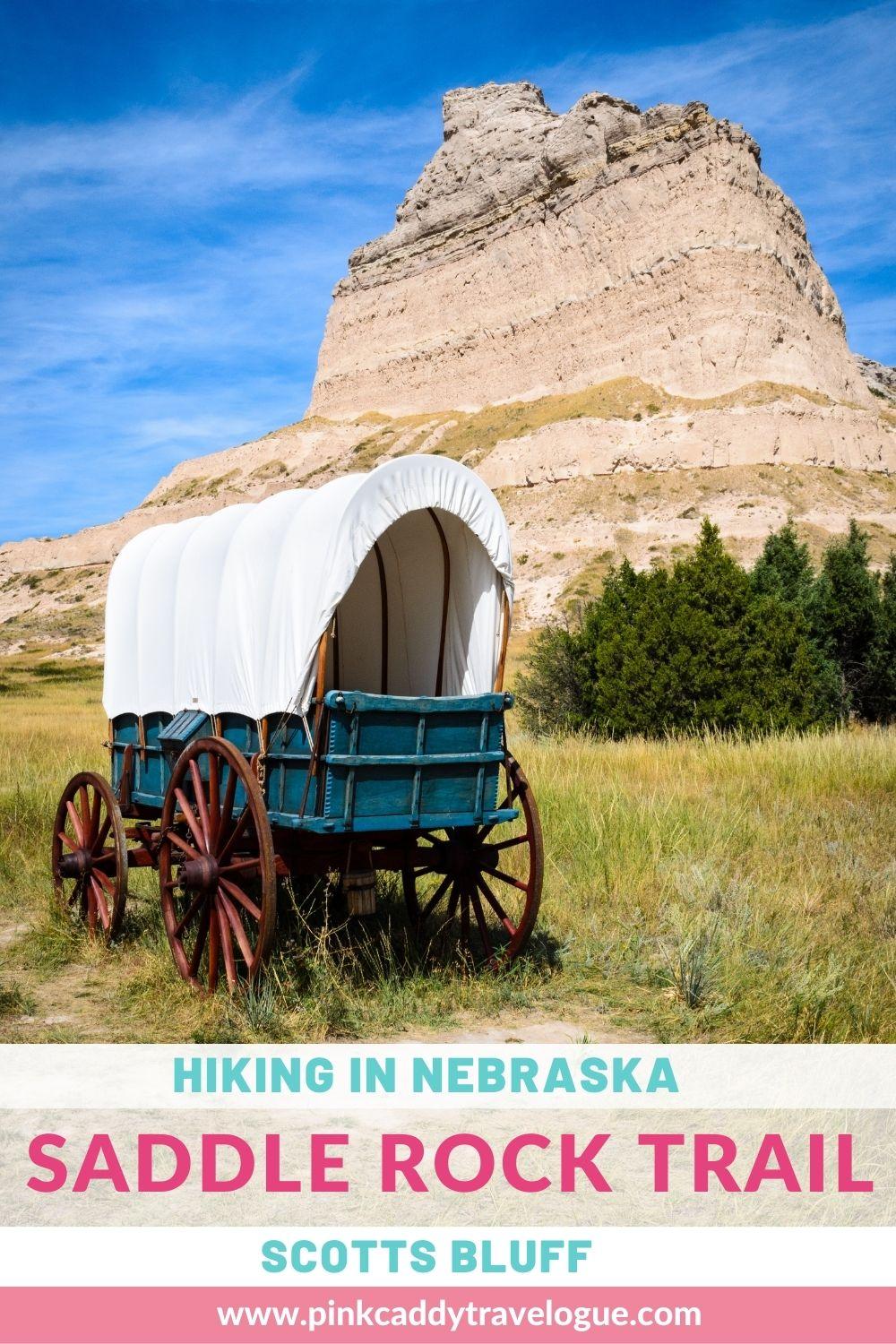 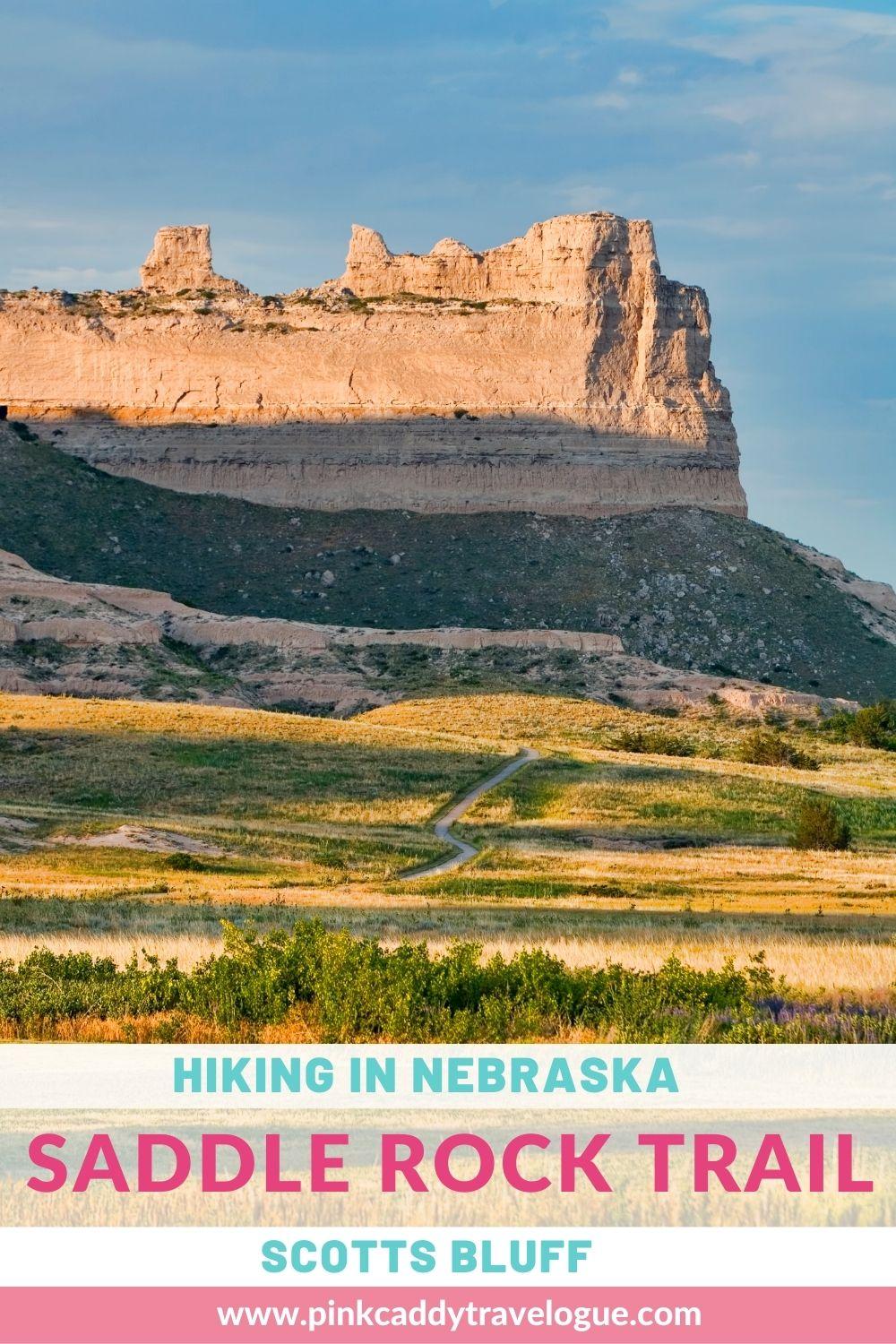