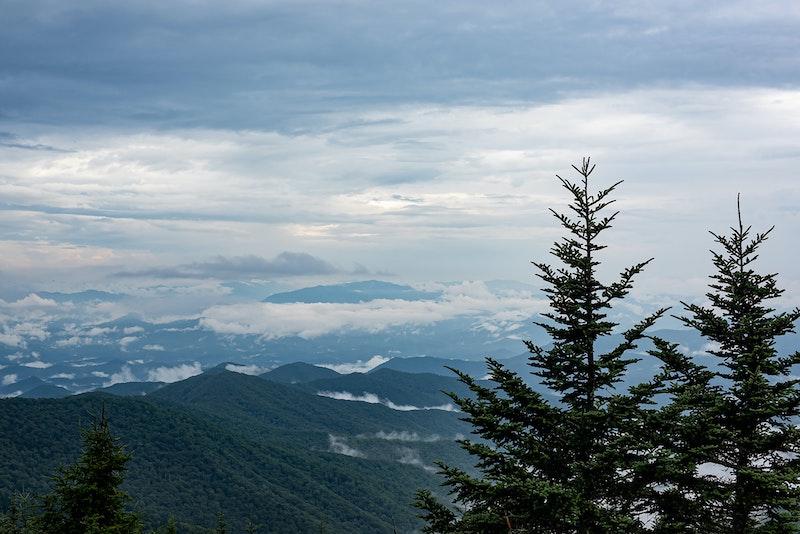 Doing the Clingmans Dome Hike is one of the must-do activities when visiting Great Smoky Mountains National Park! Read on for all the info you need to do it.

It’s the one thing almost every visitor to the Smokies does, and it’s probably the thing most people are most unprepared for – hiking to the summit of Clingmans Dome. It sounds like the sort of ridiculous thing I’d drag my parents on (remember our accidental 16-mile hike?) until I tell you that the trail is only a half-mile long and it’s paved.  So you won’t blame me, or every other tourist, for thinking this was going to be a pleasant jaunt to a scenic vista, or for my mom wearing a dress and flip flops for this supposedly easy and short excursion. I’ve never written an article about a half-mile hike, but I do love saving people from making my mistakes, so here goes a first.

I love spending a full day trekking in the mountains, but sometimes it’s nice to get to a summit with very little effort or time required. Trails like that are actually hard to come by in the Smokies, where most mountain peaks require some amount of work to get to. Despite my family being unprepared for it, the Clingmans Dome hike really is perfect for those who want to say that they summited a Smoky Mountain without killing themselves on a strenuous hike, but is also great for those looking to add a short break into an itinerary filled with longer treks.

In a park full of big (for the East Coast) mountains, Clingmans Dome gets the title of being the biggest. At 6,643 ft, the peak is the highest in Great Smoky Mountains National Park, and the third-highest on the East Coast (behind only Mt. Mitchell and Mt. Craig, both nearby in North Carolina). But despite that, Clingmans Dome is actually the most accessible of all the peaks in the park – after all, there is a paved road that goes almost to the top. The short hike from the parking lot to the summit is it a necessary part of almost any Smokies itinerary.

What’s With the Name “Clingmans Dome?”

But before I tell you about the hike, humor me with a side trip into the story behind how the mountain got its name.

Clingmans Dome was actually originally known as “Smoky Dome” by the original settlers in the area. While Smoky Dome may be more descriptive of the mountain itself, what with its haze-covered peak, the story behind its current name is more entertaining.

Thomas Lanier Clingman was a general in the American Civil War and spent several years exploring the Smoky Mountain region. It was his belief that “Smoky Dome” was the highest mountain in the area. However, Elisha Mitchell, a professor at the University of North Carolina, disagreed – he argued that a peak known as “Black Dome” was taller. The argument went on until Swiss explorer Arnold Guyot determined that Black Dome (now known as Mt. Mitchell) was, in fact, higher (though only by 39 feet). Guyot renamed Smoky Dome to Clingmans Dome in honor of the argument.

Things to Know About the Clingmans Dome Hike

How to Get to the Clingmans Dome Hike Trailhead:

Highway 441 runs through the park between Gatlinburg, TN and Cherokee, NC. The halfway point between those two cities is Newfound Gap. At Newfound, there is a turn off for Clingmans Dome (there’s a sign, you can’t miss it). Follow that road for 7 miles until you reach the parking lot. At the edge of the parking lot, you’ll find the trailhead.

About the Clingmans Dome Hike

If you’re an avid hiker, this isn’t exactly a “hike” – the trail is paved and only a half-mile from the parking lot. But if you’re more of a “sit in the car and watch the trees go by” sort of tourist, don’t think that this is a simple walk to a pretty overlook – the trail is only a half-mile, but it’s straight up the whole way, right from the very beginning.

Which, judging from the number of high heels I saw being worn and “hikers” who didn’t look like they had ever hiked anything, I don’t think anyone expects – I certainly didn’t.  And the fact that there’s a gift shop at the start of the trail doesn’t help with the misconception that this is a flat walk to a nice vista. (The Visitor’s Center and gift shop is open from 10 AM-4 PM in the summer and 6 PM in the Spring and Fall, in case you want to visit during business hours). 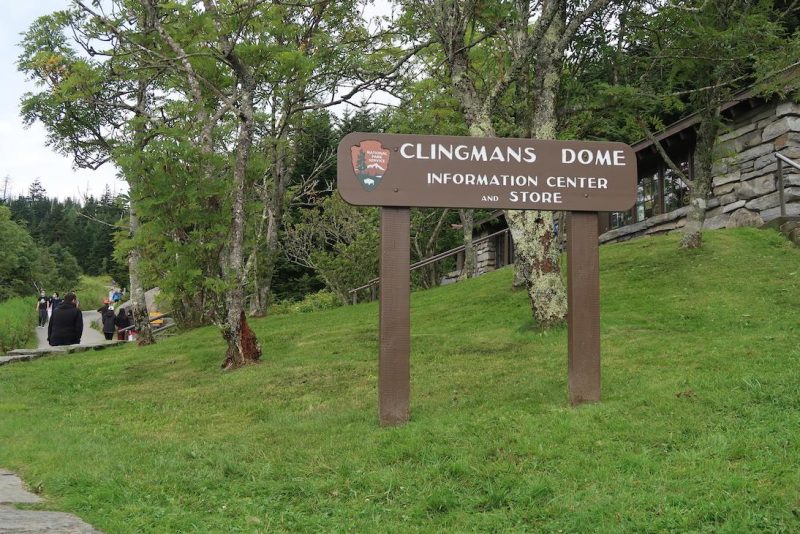 From the Visitor’s Center, the trail begins its steep climb up to the summit. If you feel like you’re a bit out of shape, don’t be deterred – there are several benches along the way in case you need to rest.

In addition to the benches, you can use the scenery to distract you. Along the way, there are meadows filled with bee balm, coneflower, and other wildflowers that only grow here because of the high altitude. You’ll also see some of the last remaining members of Clingmans Dome’s Fraser Fir grove. The tree only grows here in the Southern Appalachians; it once used to be the dominant tree at higher elevations but has been slowly dying off due to the wooly adelgid infestation. 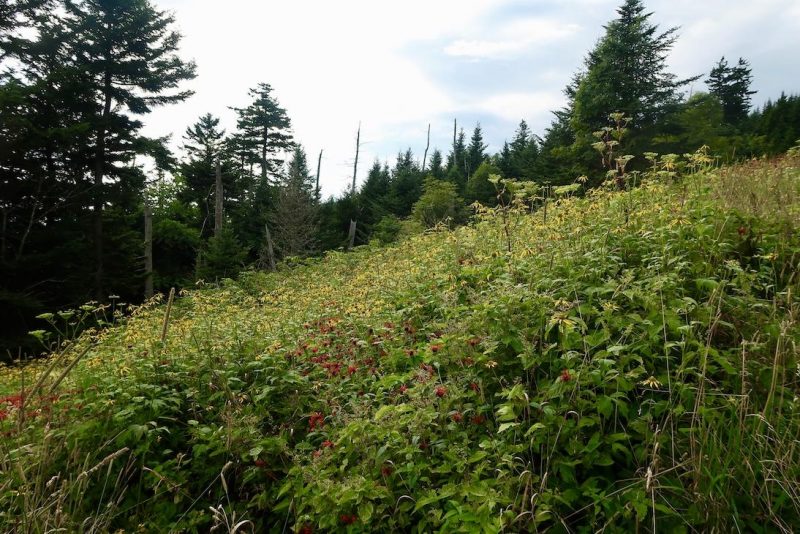 Just before you reach the summit, you’ll cross the Appalachian Trail, that famous 2,200-mile trek that goes from Georgia to Maine. It’s here at Clingmans Dome that the trail reaches its highest elevation. So even if you don’t hike any of the trail itself, you can say you stood on its high point ;). 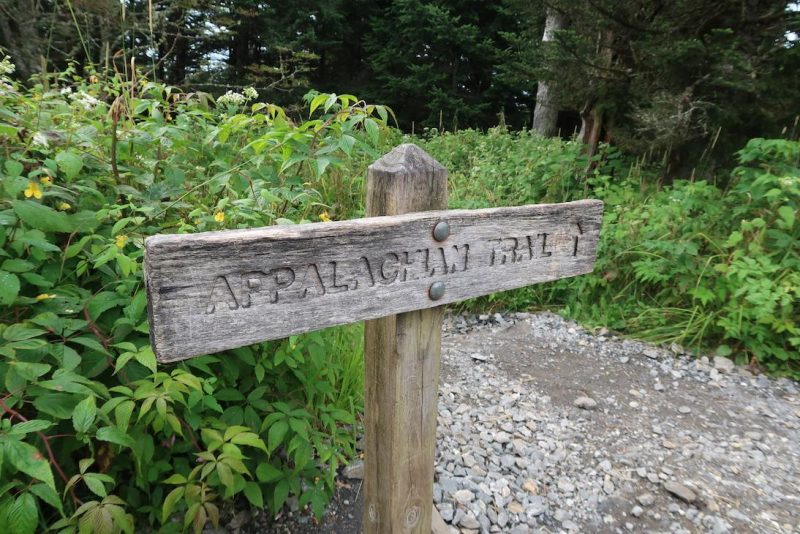 Just past the Appalachian Trail, the light at the end of the proverbial tunnel – the Clingmans Dome Observation Tower rising above the treetops. Built-in 1959, the concrete ramp and spire look like something from the Space Age. Before its construction, there was a rickety fire tower that people would climb for the views, so the observation tower is a vast improvement. 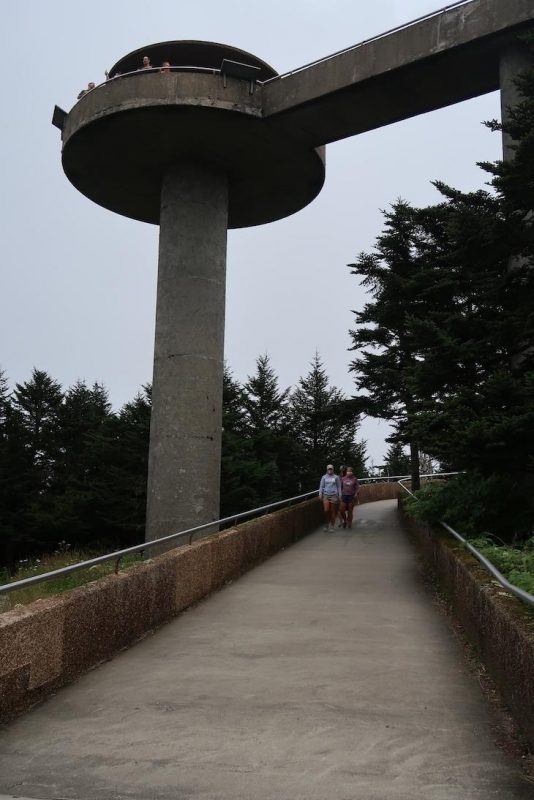 Climb up the ramp to the top of the tower to finally get what you came for – a stunning 360-degree vista of the Smoky Mountains. On a clear day, you can see Mt. Mitchell, which is almost 70 miles to the east in North Carolina!

But even if it’s not clear, the views are still awesome. After all, these are the “Smoky” mountains – clouds suit them just fine! 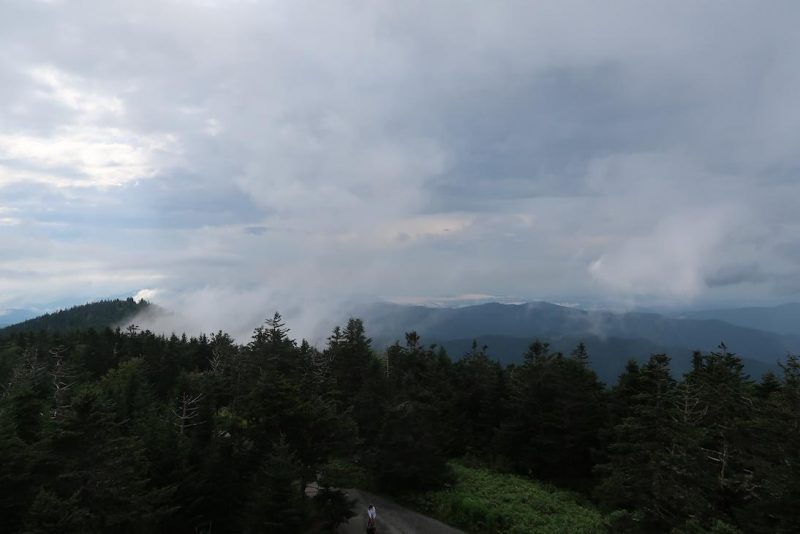 Don’t wear flip flops, bring a jacket for the changeable weather, and be prepared for something a little more than just a walk to an overlook, and you’ll have a lovely trip to the Smokies’ highest mountain!

Have you done the short Clingmans Dome hike? Have any questions? Let me know in the comments! 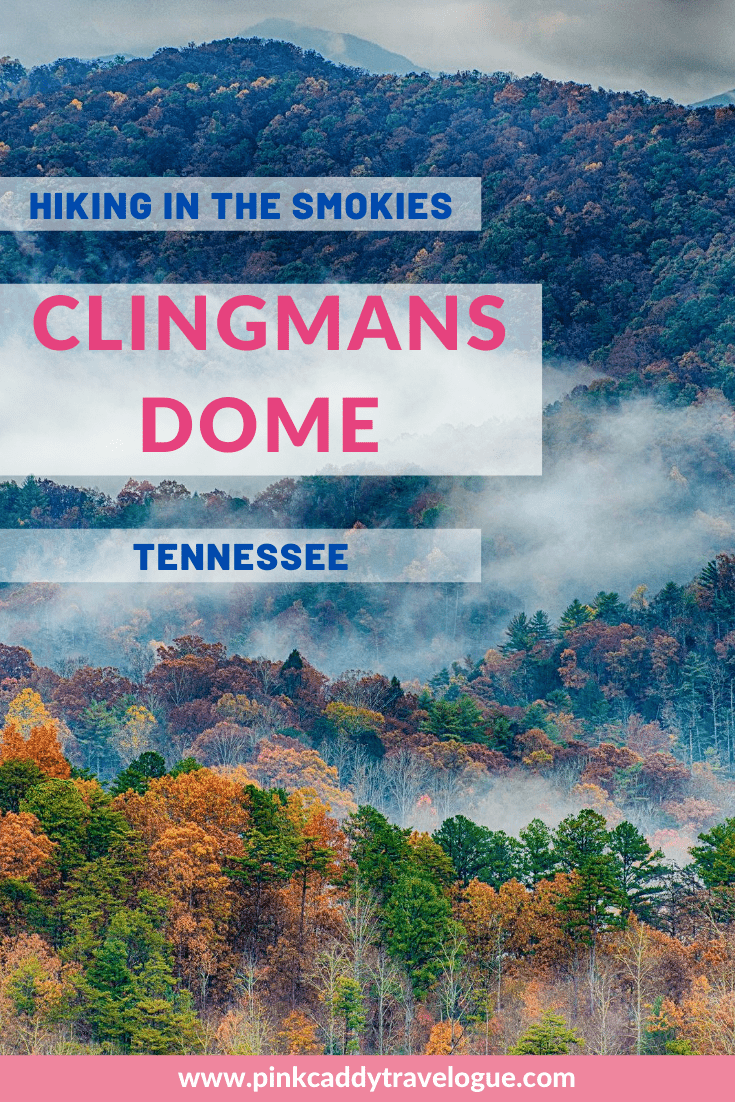 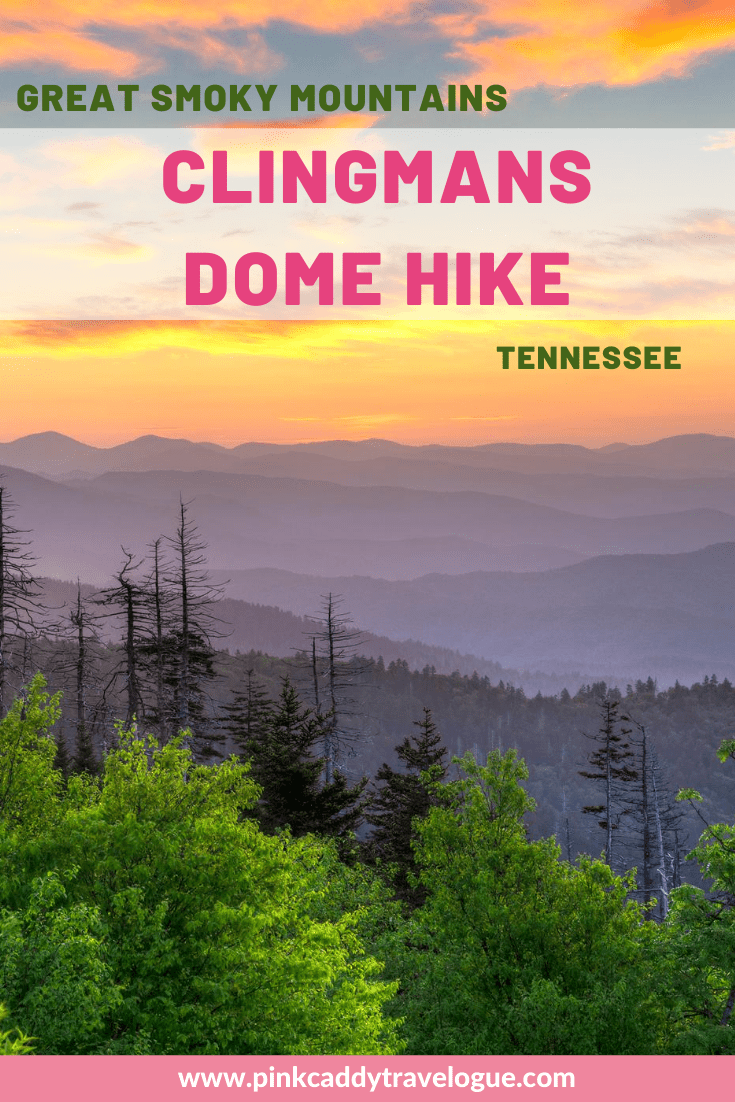