This post contains everything you need to know about driving in Tuscany!

If you’re looking for a little R&R on an overseas trip, a “road trip through Tuscany” sounds like it would do the trick. Right this moment, peaceful images of hillsides bathed in Mediterranean sunshine are drifting through your mind, right? You can practically hear the convertibles cruising up winding driveways leading to stately Italian villas surrounded by those bizarrely charming cypress trees. What could be better than endless days spent tasting the best that the wine world has to offer? At least, that’s what my mom and I imagined when we planned our own getaway.

After successfully driving through Greece, my mom had no second thoughts about the idea of driving in Tuscany. How different could it be? Greece and Italy are just across the sea from each other, right?

Or not. Traveling on Italy’s roadways and driving in Tuscany is a very different experience than an American, or Greek, road trip. However, driving really is the only way to get the most out of your trip to Tuscany. “Tuscany” is the general term for a region that is 8900 square miles; the sparse public transportation simply can’t cut it if you want to visit more than just the area around your hotel.

Fortunately for you, we survived our week of driving in Tuscany! This means that I can share with you the things we learned and wish we had known before our Italian road trip. That way, there’s no chance that your Chianti will be paired with stress and terror simply because you didn’t know what to expect.

Things you need to know about driving in Tuscany

1) Buy the Italian insurance…just do it.

The first thing you’ll do when you get to Italy, besides ensuring you have your road trip essentials packed, is pick up your rental car. When you do that, you’ll have the option of buying an insurance plan. This insurance plan ensures that you are not responsible if anything happens to the rental car, regardless of whether it’s your fault or not. It’s a bit pricey, but a lot cheaper than the repairs would be should something happen. And if you’re going to be driving in Tuscany, it’s very likely something will happen.

For starters, the roads are tiny. Many of their two-lane roads are the width of American one-lane roads. And most of them don’t have shoulders. For those who diss smart cars, you’ll wish you had one in Italy. 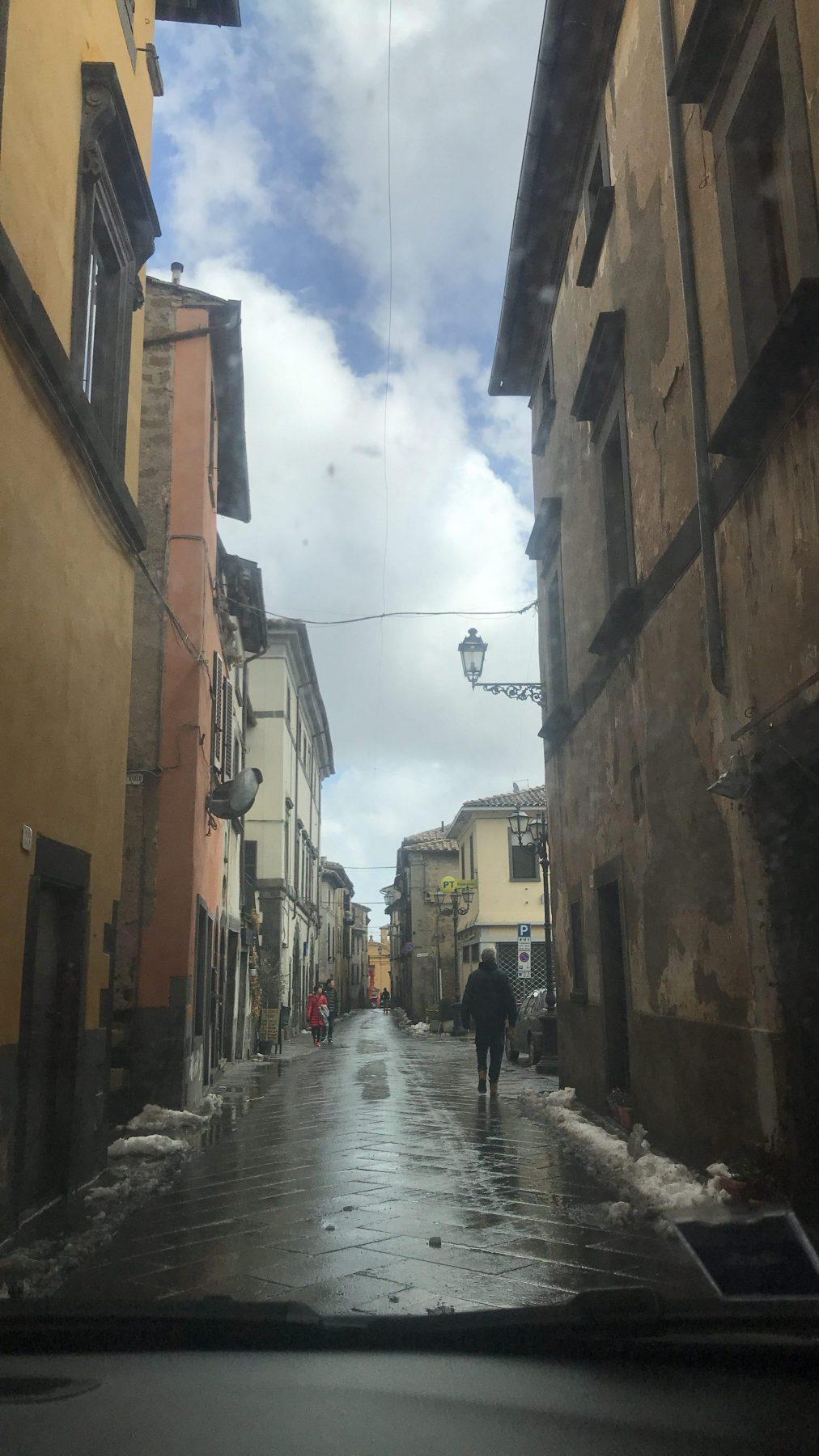 Drove down more roads like this than wider ones…

And the curves in some of the Tuscan hill towns are amazing. We did one in Massa that was a literal 180 degrees (see photo proof). 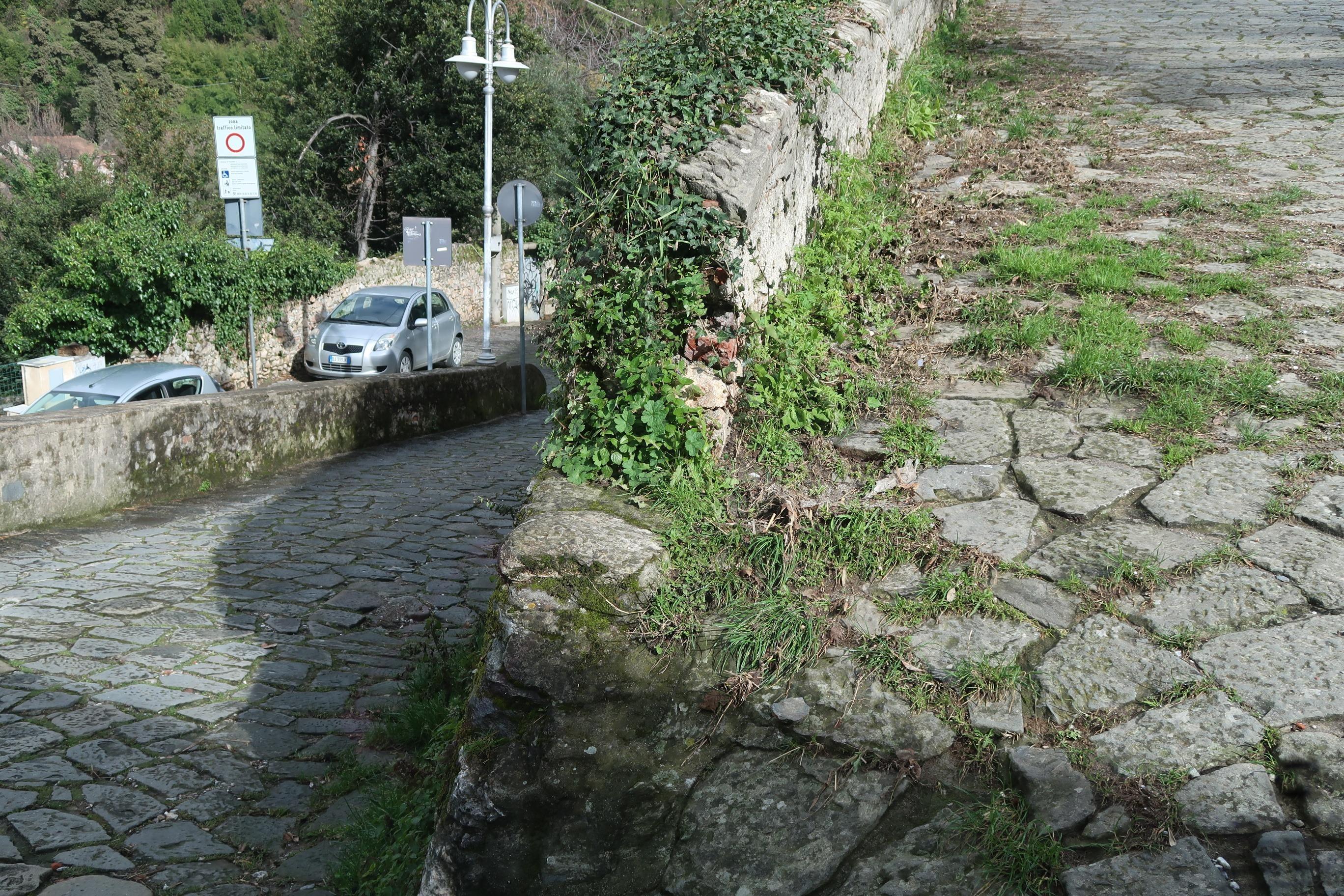 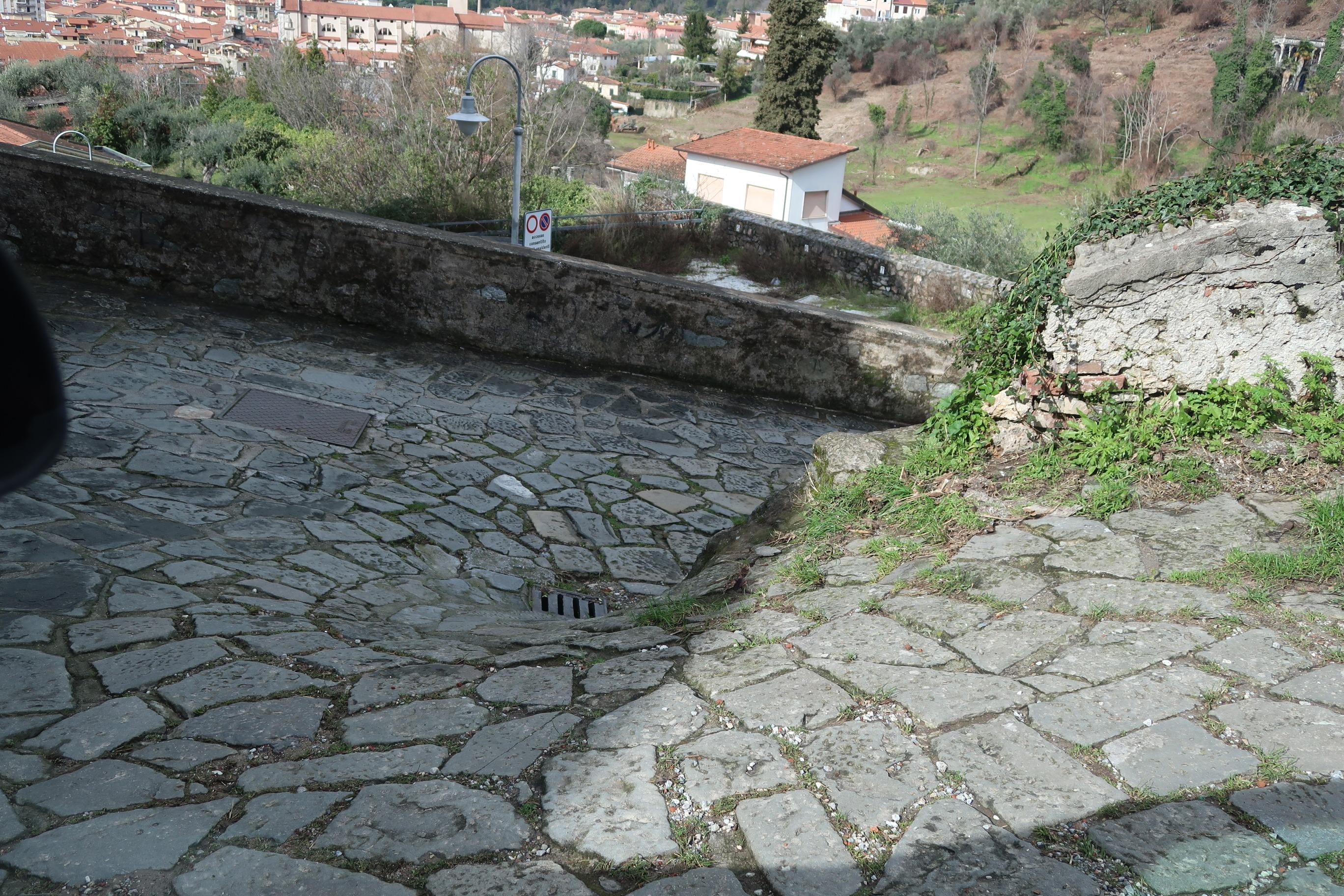 If the roads and curves are ridiculous, you can bet the parking is too. Our insurance became worth it the day we scratched our car trying to park.

So just give yourself a little extra peace of mind and get the insurance. It will definitely lessen your stress while driving in Tuscany and could end up saving you a lot of money.

2) Italians drive as if there are no rules

If you have ever dreamed of being a Nascar driver, you should move to Italy. You can live out your dream there every day. The average speed of the locals seemed to be about 150 KPH, which is 93 MPH. (Which reminds me to remind you that most of the world uses the metric system, so all of the signage and speedometers use kilometers; fellow Americans, don’t let that throw you off).

Related: Driving a Ferrari in Italy will up the quality of your road trip by 1000.

And if you drive too slowly, the other drivers will let you know by flashing their lights at you. In America, that’s obnoxious. In Italy, that’s them courteously asking you to get in the other lane so that they don’t run you over.

However, speed limits do exist; I talk about them below in the signage section.

Italian drivers also don’t stay in their lanes. I don’t know if it’s because they’re indecisive or if they just like to own the entire road. But we very frequently saw cars like the one below, riding the middle until they had to move over, but then returning right back to the middle of the road. 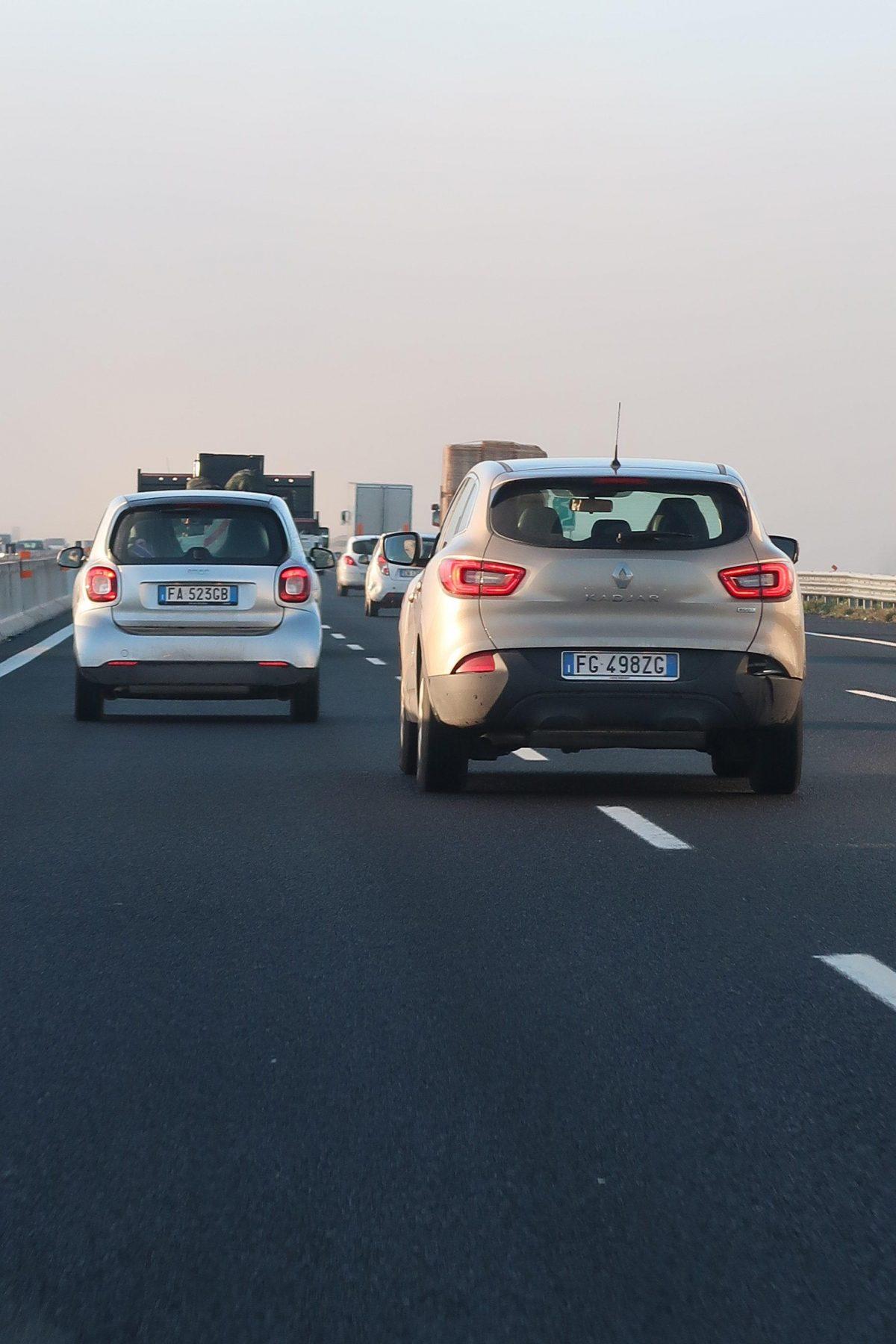 Stop signs? Yeah, those seemed pretty optional too. Not for us, but definitely for the Italians.

3) But they are much better drivers than Americans

Despite the seeming lack of rules, Italians are much better drivers than Americans. We didn’t see a single accident during our week in Italy. I once read that this is because of the lack of rule enforcement – European drivers have to be much more aware of their surroundings, which results in them being much safer. Americans just assume that everyone else will do what they’re supposed to; and then when they don’t, accidents happen because no one was paying attention.

Related: Other travel mistakes NOT to make in Italy

That also means the Italians are very courteous drivers. Aggressive speed demons, but courteous. There were times when we clearly had no idea what we were doing or where we going, and the Italian drivers helped us out.

For example, driving back to our apartment one night, there was a road that only had one lane open because of construction. Eventually, the construction zone ended, but we didn’t realize that and continued driving on the wrong side of the road. The Italian behind us could have taken this opportunity to speed past the slow, confused foreign drivers. Instead, he signaled to us that we were on the wrong side of the road and were probably going to be hit soon. Once we moved over and were safe, he zoomed on by. But not before.

At some point during your trip, you’ll need to get more gas. That is a sad fact of life and an unavoidable part of driving in Tuscany. Another sad fact is that just because you are fully capable of pumping gas in your home country doesn’t mean you are ready to do it in Italy.

In Italy, you could spend 30 minutes trying to figure out a) how the heck the gas pump machine works and then b) how the heck to get the no-English Italian money machine to take your money. We did that several times, desperately hoping someone who spoke English would show up at the gas station to help the poor Americans. Yes, we spent 30 minutes trying to pump gas multiple times.

But just before our trip ended, we learned a very important hack. Each gas station has both a full-service and self-service station. It’s like living in both New Jersey and any of the other 49 states at the same time! If you use the full-service, you don’t have to check your ego every time you need gas. Just let the serviceman pump it for you!

However, if you think “I’m a smart independent American who’s not dumb enough to be fooled by a silly gas pump; I’m going to pump my own gas!”, let me help you out. Here’s what you do: 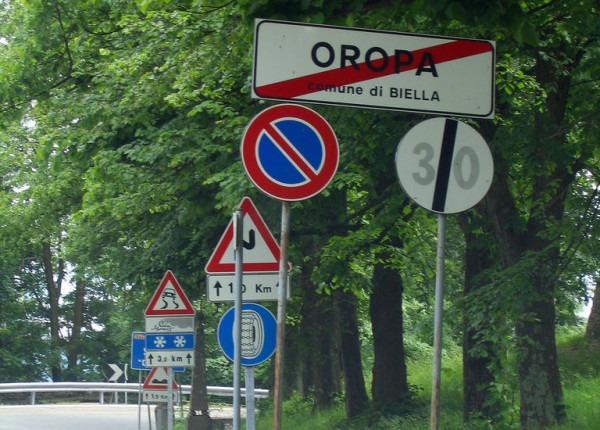 So many meaningless signs!

While driving in Tuscany, my mom and I started assigning our own meanings to the signs we couldn’t figure out. My favorite was when the only sign was an exclamation point all by itself, as if to say “be alert! You’re driving!” You know, in case the 180 degree turns, 2-lane roads that can only fit a Vespa, and crazy drivers going 150 miles an hour down said roads hadn’t already made you alert. Just in case, here’s an exclamation point.

A cursory look at the Wikipedia page on Italian traffic signs will give you an idea of how overwhelming understanding them can be. To make things worse (and the page won’t tell you this), these signs seem to travel in families. Where you see one sign you’ll see 20 others. As if figuring out one foreign traffic sign wasn’t bad enough, here’s an entire deluge of them to look at! The good news is, you can get by just fine without knowing what all of them mean. I’m going to tell you what you absolutely need to know to keep yourself out of trouble.

Circles mean something is forbidden, or an instruction that is compulsory. Rectangles or squares are informational signs. Triangles are warnings.

Stay out of the “zona traffico limitata”, or ZTL’s. Most of the towns and the entirety of downtown Florence have a ZTL, and they are camera controlled. This means that absolutely NO vehicles are allowed except for those with permission. If you park in a ZTL, you will get slapped with a hefty fine that will be sent back to you in the United States (and yes, I’m speaking from experience). So this is a VERY important sign to know when driving in Tuscany: 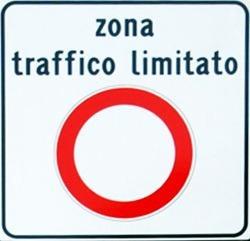 This next pair is also very important for foreigners. They mean no stopping or standing at any time, even if you see the Italians doing it (they might have special permits). This means no stopping to drop off mail, no standing to take a picture, NOTHING. Find another stopping place that doesn’t have a sign. 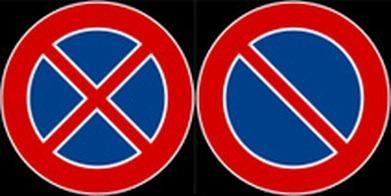 There are speed limit signs, and they look like this: 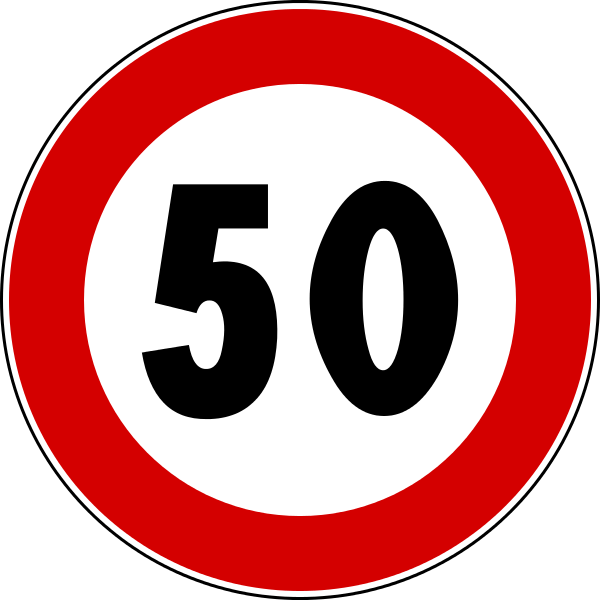 As I said before, Italian drivers don’t seem to follow these. However, that doesn’t mean you should follow their example. Many of these areas are monitored by camera, and I’ve read several accounts of tourists driving like the Italians, only to have a speeding ticket waiting for them at home. The locals know how their system works and how to skirt the rules. We, however, do not. It’s up to you to decide how much you want to blend in with the Italian drivers; all I can do is warn you!

Parking can be difficult to find, but many of the Tuscan towns have designated free parking lots. They are marked by the blue sign with a white “P”, like in the below picture. But some, also like below, have restrictions. “Ora” means hour, so this is one-hour parking only. The crossed hammers mean that the restrictions only apply Monday-Friday (hammers = work days). If you see a Christian cross, the restrictions are for public holidays and Sunday. The mini “P” sign in the corner means that you need to have a “disco orario” in your windshield to park there (second picture below). Our rental car came with one, and I had no idea what it was for the entire time we were in Italy. Now I do. 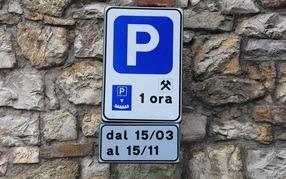 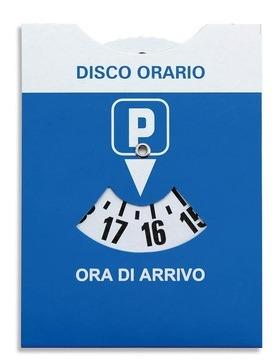 Driving in Tuscany is definitely an adventure. Even with these tips, you’ll still see signs that’ll make you scratch your head, and driving behavior that would never work in the US. But you won’t be totally clueless, and you’ll have more energy to enjoy your trip and your wine.

Related: Visit Italy Carhire for all your rental car needs!

Have you ever tried to drive in Tuscany? Tell me about it in the comments! 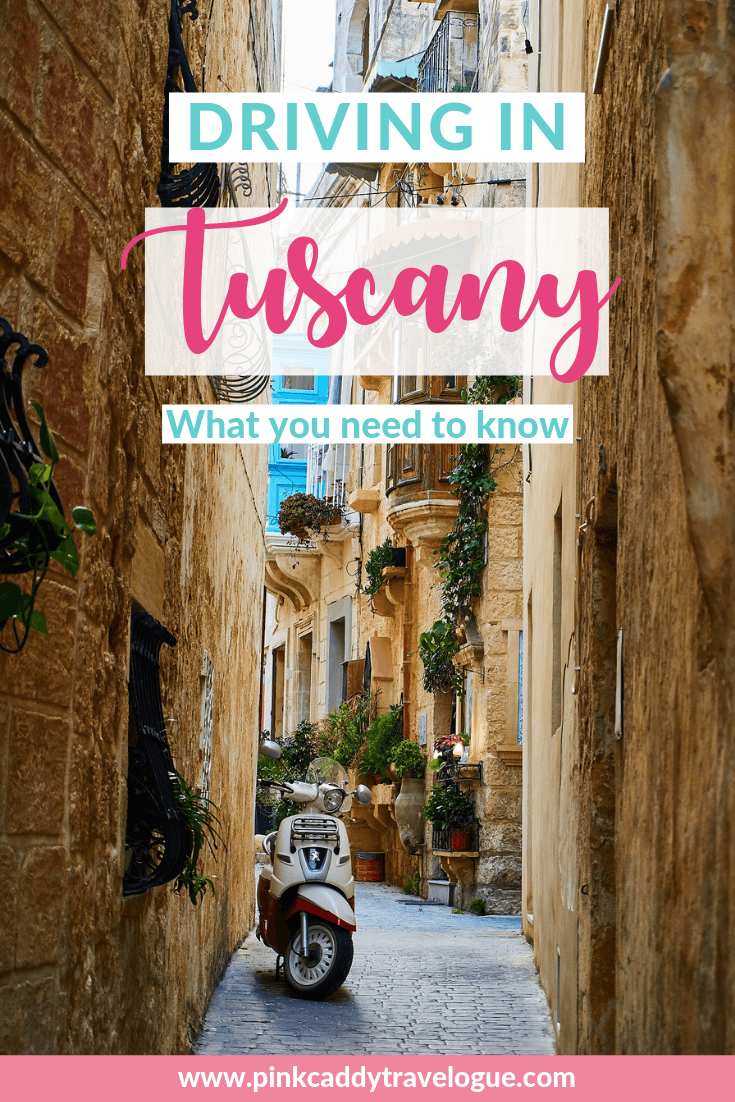 Driving to Delphi: Home of the Oracle

8 Helpful Things to Know About Driving in Scotland