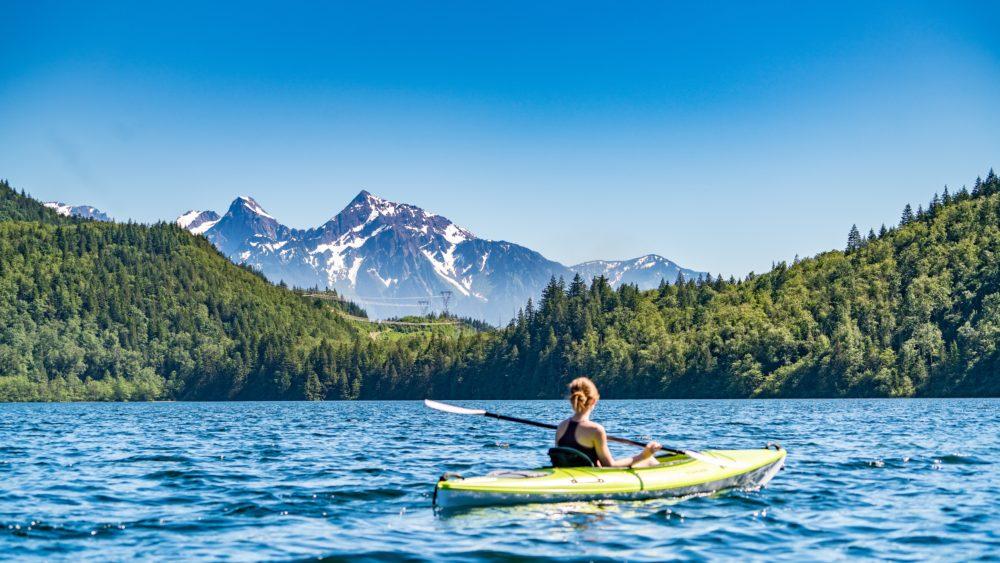 Looking for an amazing kayak tour for your Montana vacation? Check out Sea Me Paddle!

Why I Booked a Kayak Tour

“I just don’t want to spend the whole time paddling around in circles!”

I had booked a kayak tour on what was recently voted “America’s cleanest lake” and one of the top places to visit in Montana. It’s rumored that there are days that you can see straight down through the crystal clear water to the very bottom of the lake. But my mom, the beach girl, who loves doing anything water-related, who was the main reason I had booked a kayak tour as part of our Montana trip, was concerned. What if we had come all the way out to Montana just for her to paddle in a circle?

Not that her concerns weren’t somewhat justified. Covering almost 200 square miles, Flathead Lake is the largest natural freshwater lake west of the Mississippi River. It’s so large that it often creates its own weather, which we experienced as an unforecast wind gust blew through the bay during our kayak tour. It’s not exactly the kind of place you want to venture out on your own if you don’t know what to do with a kayak. 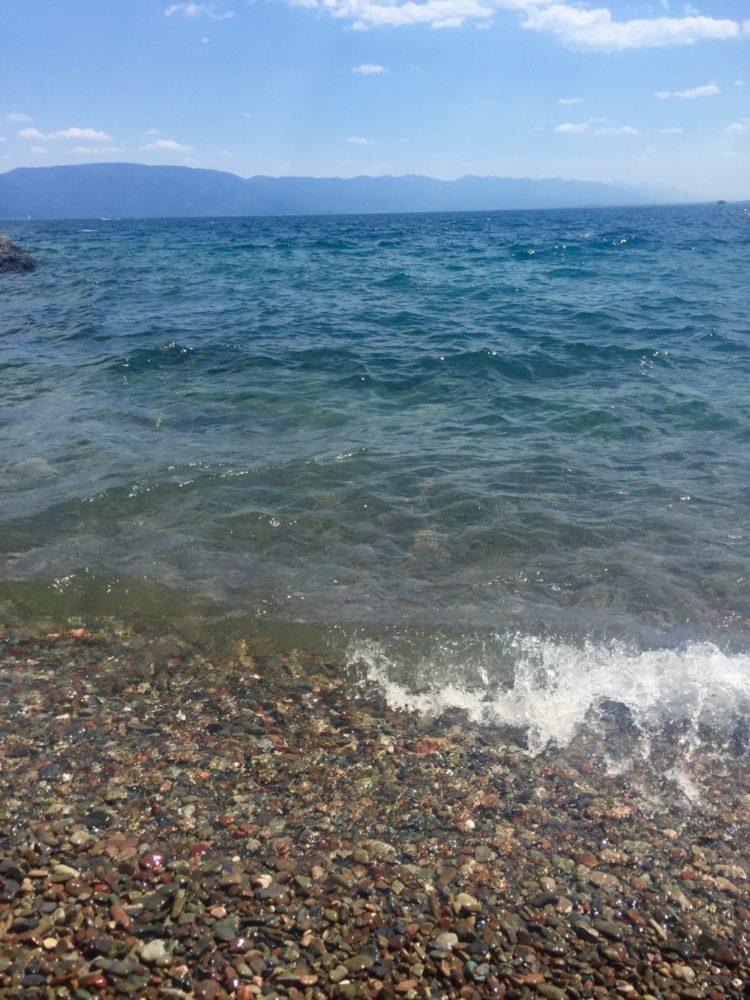 Look how clear and clean it is!

And I didn’t really want my mom, or my dad, paddling around in circles the whole time either. So how to take my parents, kayak-amateurs, on a kayak tour of massive Flathead Lake? The solution: with a guide, who could ensure that no one paddled in circles, got lost, drowned, carried off by eagles, or capsized by an unexpected tsunami, all while pointing out wildlife and historical facts we wouldn’t have known otherwise.

A guide named BJ, owner of Sea Me Paddle.

But why would anyone want to go kayaking on Flathead Lake anyway?

In the age of social media-fueled tourism, it’s odd that Flathead Lake is still relatively unheard of. Several years ago, an image went viral, first on Pinterest, and then all over the internet, showing a young woman floating on a lake so clear that you could see straight to the bottom, 370 feet away. That lake was the Flathead in northwestern Montana. 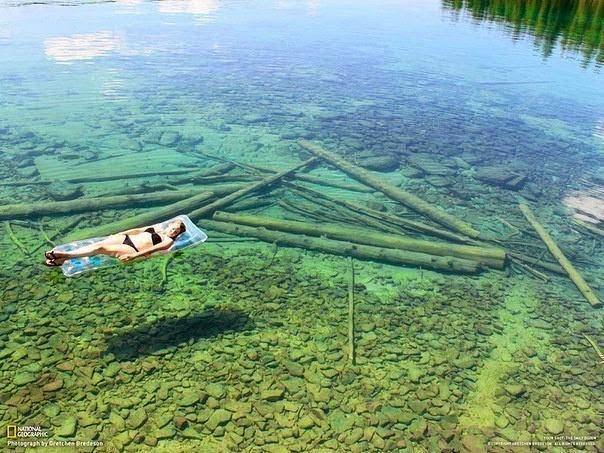 Usually, a sharp increase of visitors follows these sorts of internet photo fads, but that didn’t happen to the Flathead Valley. Maybe that’s because of its proximity to Glacier National Park, which receives almost 3 million visitors every year. The towering sheer rock cliffs, turquoise blue glacial lakes, seemingly untouched vast wilderness make the large national park a captivating place – so much so that few tourists ever leave the park and make the short 45-minute drive south to Flathead Lake. It’s kind of like when you go to Target for one item, and leave 2 hours later with a basket full of all sorts of things you don’t need, but not the one thing on your list you went there for. Glacier does that – you enter the park and instantly forget that there’s anything else in Montana worth visiting, including Flathead Lake.

But sometimes, Mother Nature forces tourists to search for alternate means of entertainment. In 2017, nearly half of Glacier National Park was evacuated and closed due to a particularly devastating wildfire year. And now, almost halfway through August, it looks like summer will once again be cut short in the park, with several lightning-sparked blazes wreaking havoc along the Going-to-the-Sun Road. While forest fires are good for the environment, they are rather inconvenient for tourists!

So despite being “America’s cleanest lake,” a paradise for every water-sports lover, and having 185 miles of naturally gorgeous shoreline, Flathead Lake is still mostly undiscovered, except during times when people can’t fully enjoy Glacier National Park. That makes it a great, off-the-beaten-track destination for anyone visiting Northwest Montana or nearby Missoula. Which, if you’ve spent any time on the blog, know that that’s exactly the kind of place my family likes.

Back to BJ, who was not nearly as concerned with us knowing how to kayak as we were. After a 30-second crash course in how to maneuver the boat, he assured my mom with a “you’ll be just fine,” before guaranteeing that we’d all go home with a new Facebook profile and cover picture. To me, that didn’t sound reassuring. The mischievous twinkle in his eye made me think that that “profile picture” was going to be snapped after someone flipped their kayak and fell into the lake. What had I gotten us into? 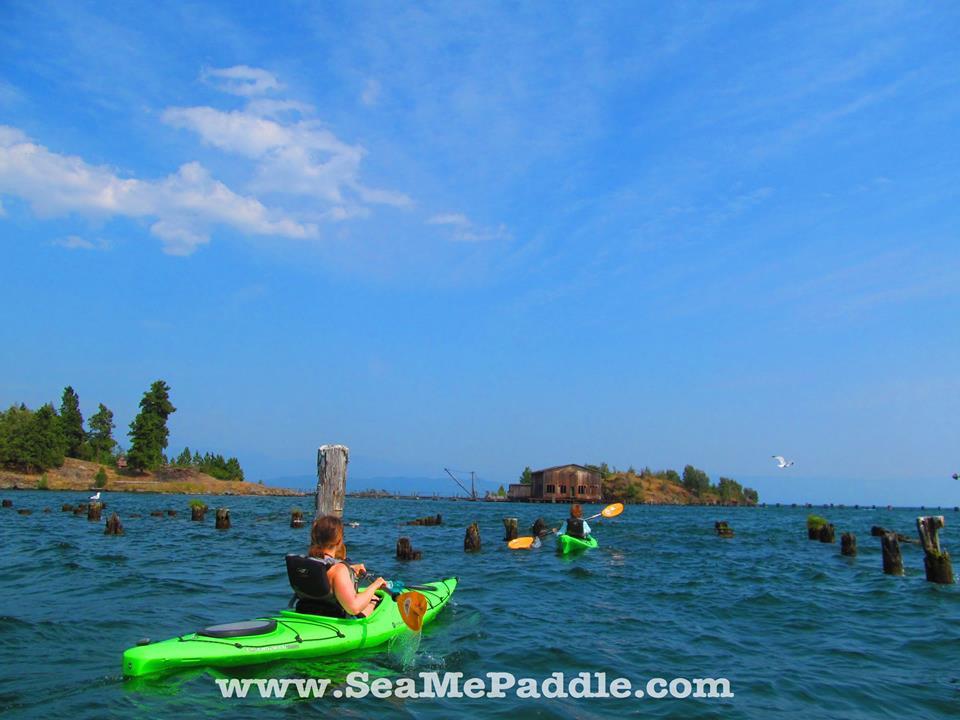 Fortunately, my original misgivings about the kayak tour were quickly disproven. 10 minutes into our 2-hour paddle of the Somers Bay area of Flathead Lake, and still no one had gone around in a circle. Success!

BJ first led us under an osprey nest that he’d been monitoring all summer, and as we paddled by, one of the parents swooped overhead and the chicks popped out of the nest, ready for whatever treat Mom or Dad was bringing. 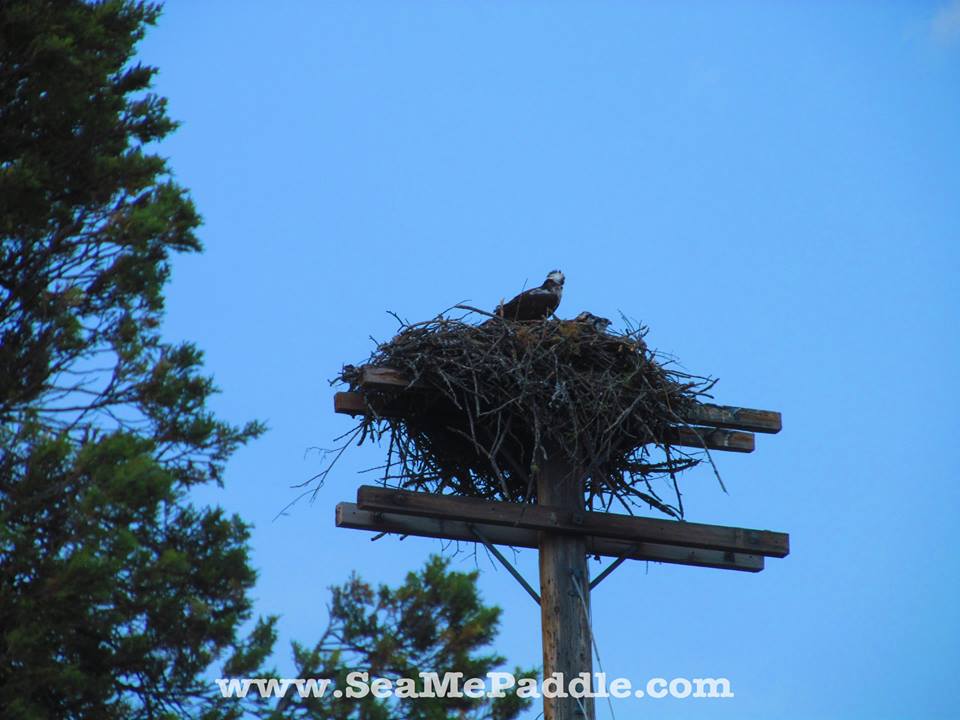 Our guide named every bird that flew overhead before we even saw them, including a bald eagle, mergansers, and coots.

Along with the role of naturalist, BJ also served as our own personal Flathead Lake historian. He told us all about the history behind the ghostly pier remains sticking out of the blue waters all over the bay. Once upon a time, they belonged to a spur railroad installed by the Somers Lumber Company in the early 1900s. The company eventually dismantled the rails but left the wooden columns to poke their heads out of the clear water for decades afterward. 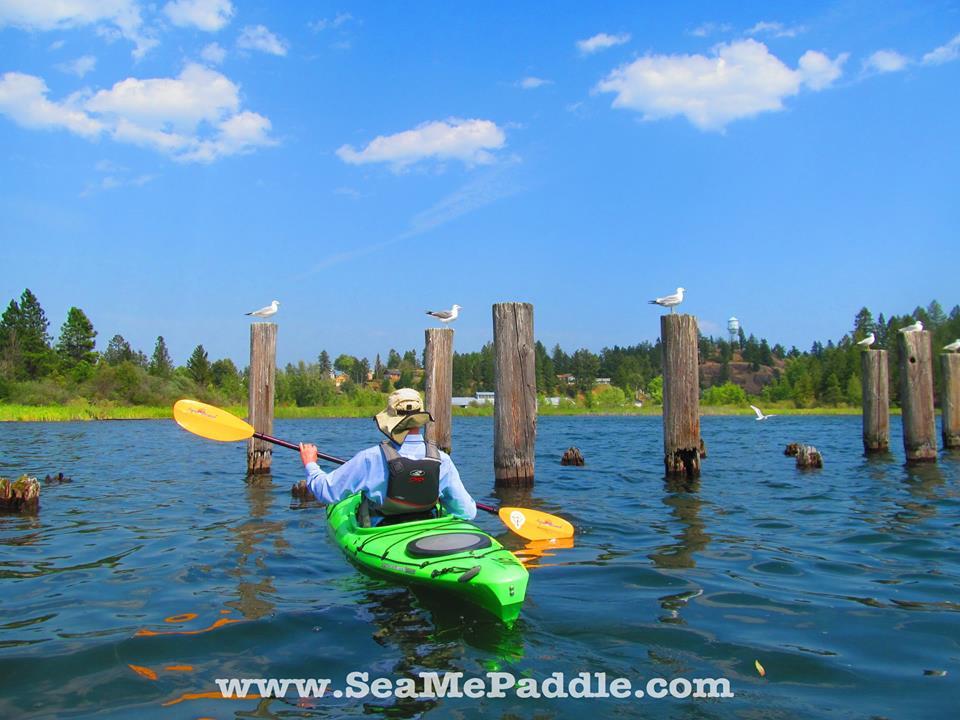 One hour in, and still no paddling in circles. That unforecasted wind started picking up when it was time to paddle out into open water. The waves looked small, but our calm, leisurely paddle suddenly felt like a mini theme park water ride. Which can be pretty exciting when you’re not actually attached to a ride and are instead armed only with a piece of plastic a few feet long. But BJ gave us clear instructions and, with his guidance, everyone made it through the wood pilings and to the next cove without capsizing. 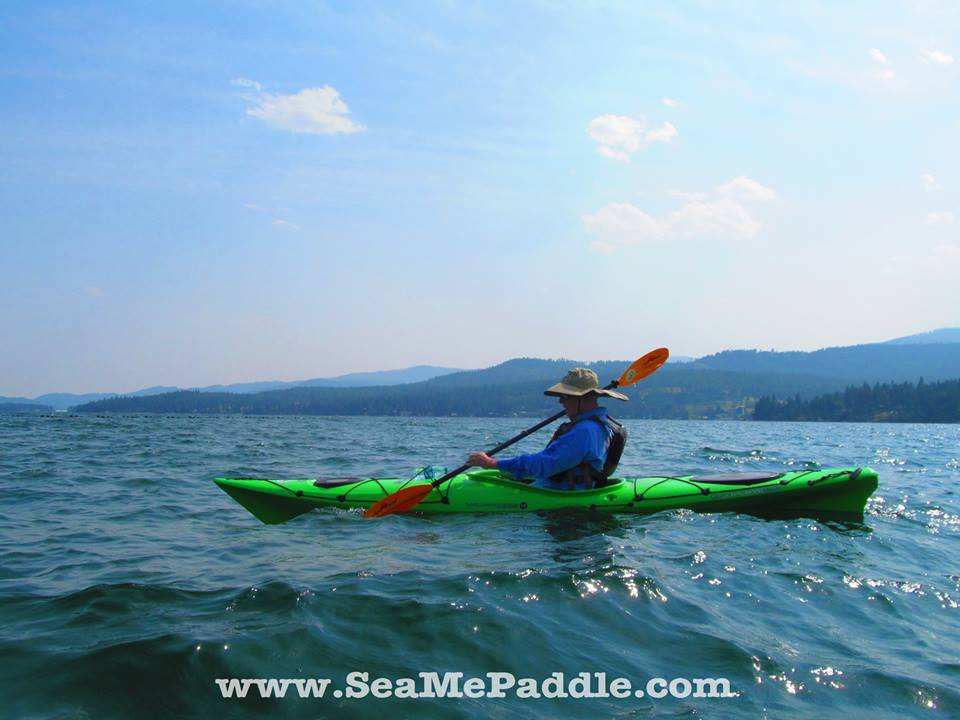 For BJ, Montana is a dream home. He had never been to the state, but when he decided to retire over a decade ago, he rolled the dice (figuratively) and pointed his finger at a random spot on the map. His finger picked the northwest corner of the Treasure State, so that’s where he went. Imagine how excited and relieved he was when he showed up and saw how beautiful the Flathead Valley is! Now he and his wife run the premier kayak tour and bike rental company in the Flathead area. That was a lucky gamble, indeed! 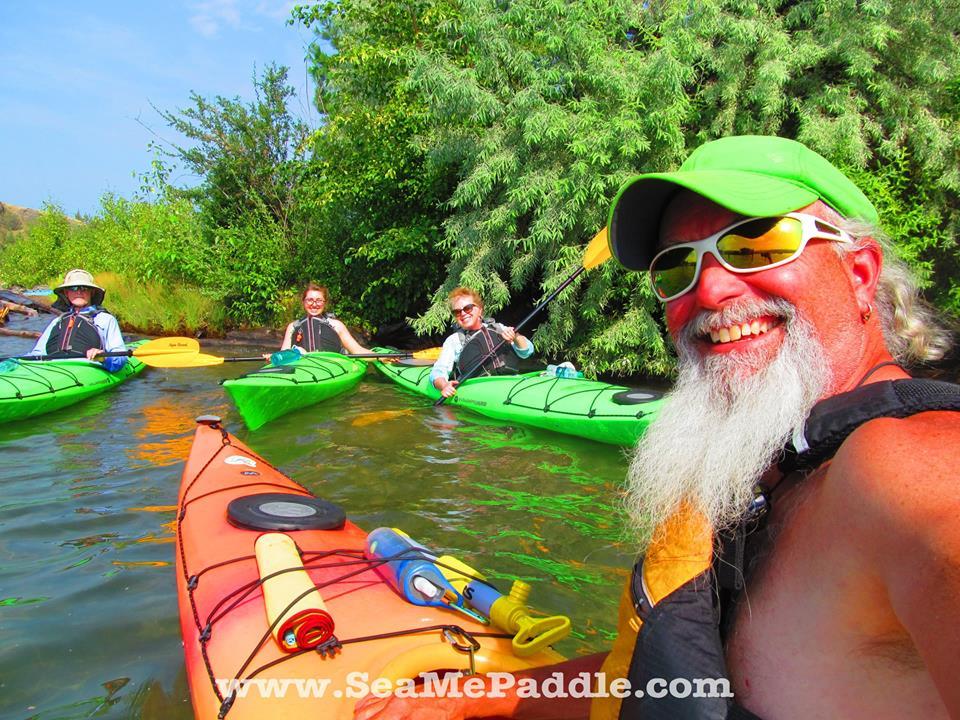 BJ, taking a selfie with his kayak proteges!

Pretty lucky for us, too, because it meant that we got to have an incredible kayak tour worth every penny. Because of the wind, we didn’t actually get to paddle out to all of the locations normally included in the tour, but BJ made up for it with his laid-back, entertaining personality and his knowledge and insight about the area. He also saved me a lot of stress by taking a ton of pictures, so that I didn’t have to worry about dropping my phone into the water! (Which is why, unlike my other posts, most of these pictures aren’t mine – Sea Me Paddle gets the photo credits!) 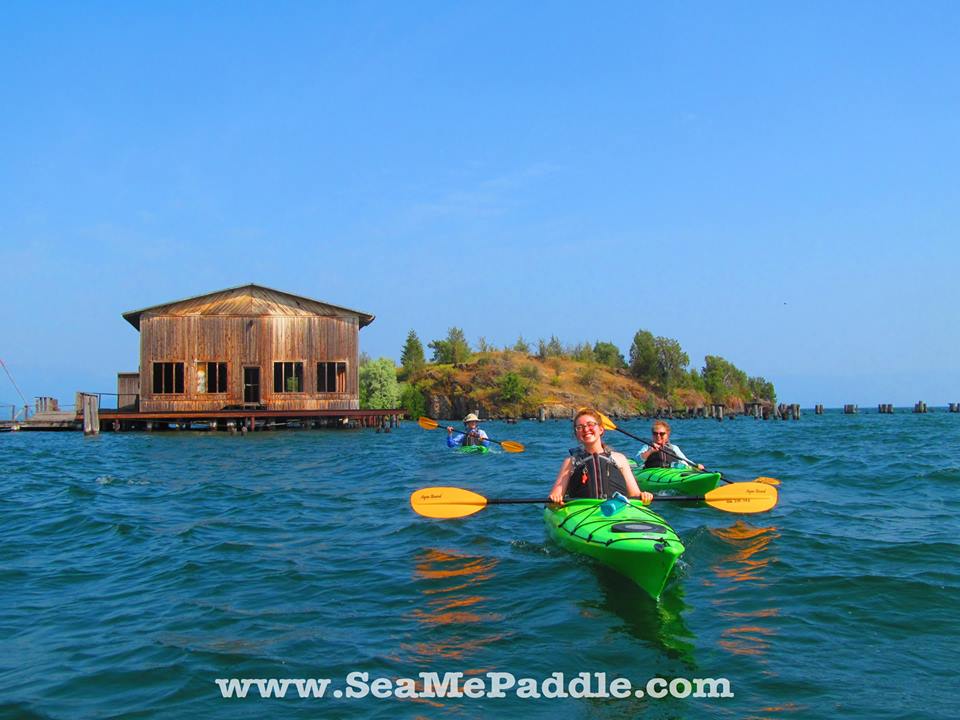 We did the 2-hour Somers Bay tour, which is perfect for families and beginners. But Sea Me Paddle also offers full-day tours to Wild Horse Island, sunset tours, and honeymoon tours with wine and cheese included. If you’re not a kayak newbie, you can also rent your equipment from them and brave the vast Flathead Lake on your own. And if you’re visiting Montana in the winter (you crazy person, you), you can even do a winter kayak tour of Somers Bay. Regardless of your experience or interests, you are guaranteed to have a great time no matter what.

And they really won’t let you paddle in circles. 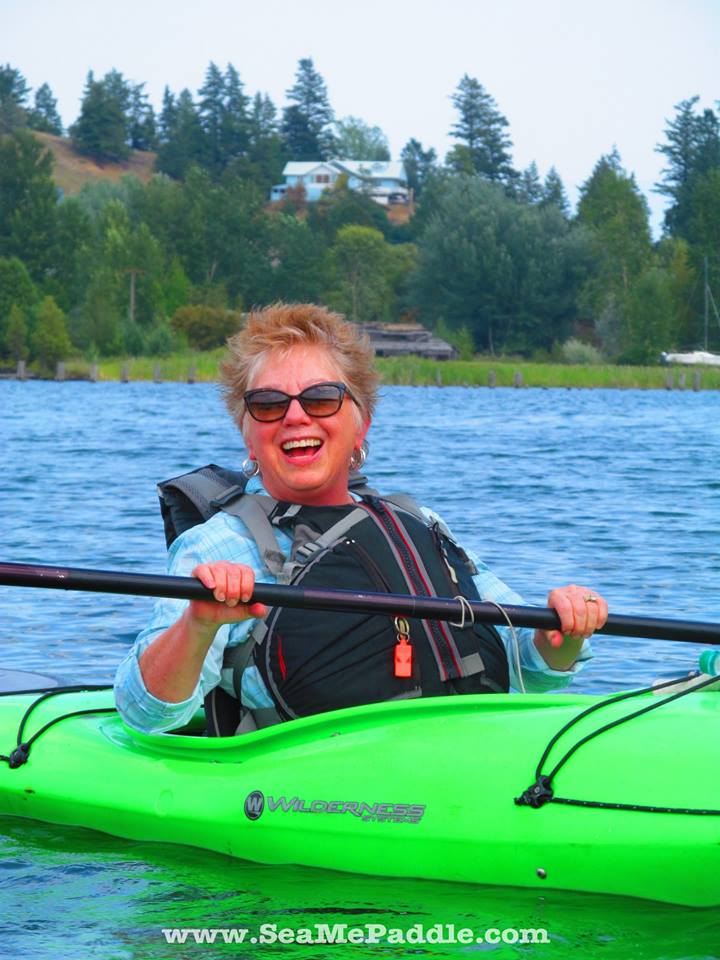 Sea Me Paddle has five different locations, depending on which tour you pick. They have a great online reservation system, but you can also email or call them. They’re very responsive and will be more than happy to answer any questions you have!

*Sea Me Paddle offered me a discount for this post, but all opinions are my own. 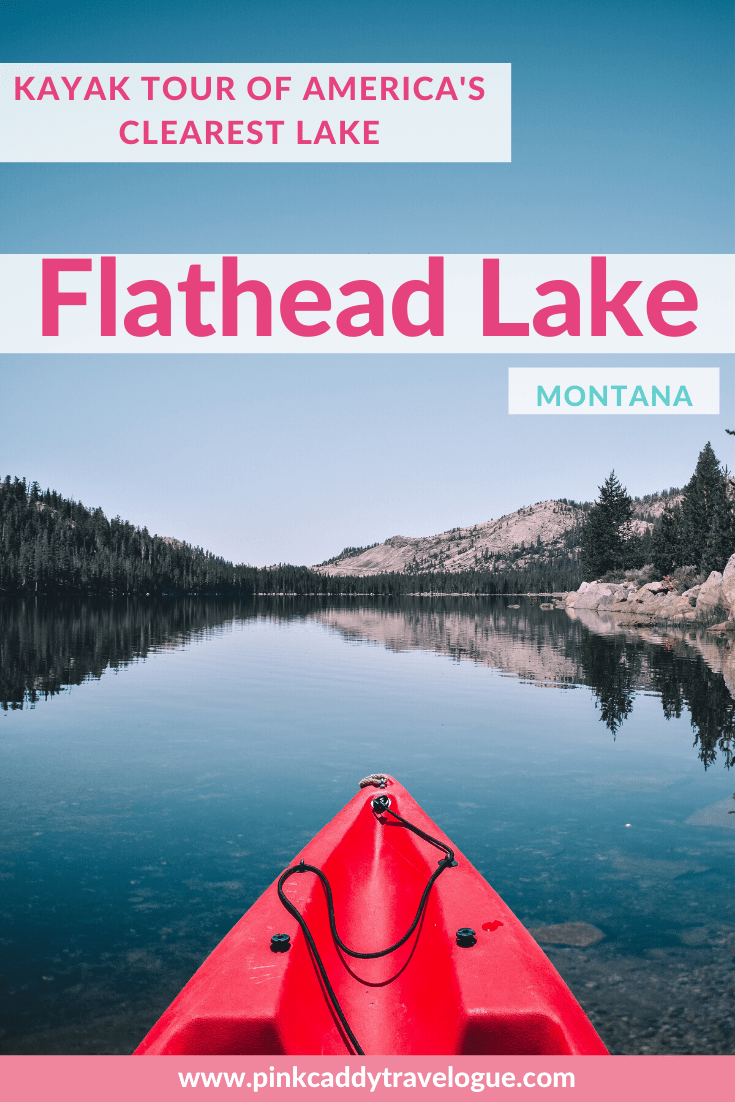