One Day in Santorini: an Itinerary

Only get to spend one day in Santorini? This is the itinerary for you!

One Day in Santorini

Santorini: every Instagrammer’s favorite Greek island. And it’s not hard to see why, what with its aesthetic villages of snow-white abodes, accented with cobalt blue roofs, doors, and garden gates, and immense sheer cliffs reaching down into the Aegean. It truly is picturesque no matter where you look. 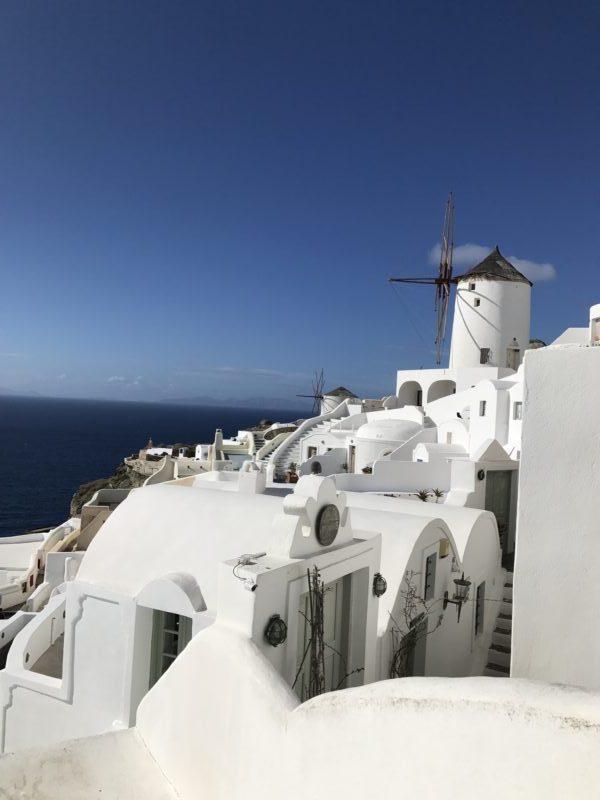 The prettiness is blinding!

Greece’s star of the Aegean, now a beautiful paradise, was formed from a violent volcanic eruption. The eruption of Thera was one of the most powerful volcanic eruptions in the history of the world. It wiped out the Minoan civilization, and has been the source of many myths and legends (like Atlantis) throughout history.

But the eruption produced what we now know as the island of Thera (named for the former volcano), or Santorini. The island’s villages are balanced along the rim of what was once the volcano’s caldera. Its multi-colored beaches reveal the different layers of solidified lava produced by the volcano (such as Red Beach and Black Beach), and its volcanic soil is perfect fertilizer for many crops.

As popular as it is, you may think that Santorini is inaccessible to you or any other average Joe (no offense to Joes), whether because of its status as a luxury island or the very fact that it’s an island in the middle of the sea. But it actually makes the perfect day trip from Athens! Round-trip tickets on Ryanair from Athens to Santorini are only 30 euros in the off-season. And with the flight being a mere 45 minutes, it’s just as quick to get to as many of the mainland sites outside of Athens.

Though the island is only 34 square miles, it’s packed with different things to see and do. So planning to spend just one day in Santorini can be a daunting task. But unlike other top-destinations (like Venice), spending one day in Santorini is manageable, as long as you have a plan. So to make your life easier, here’s an already made plan that has been created and tested by me that you are welcome to use!

One Day in Santorini Itinerary

7 AM: Get on your flight

“But that’s so early!” If you want to have as much time as possible on the island, you need to take the earliest flight out of Athens. It’ll be worth it. You do only have one day in Santorini, after all.

Also, brace yourself: the runway at the airport is VERY short. Our rather rough landing earned our pilot a round of applause from us passengers happy to not be currently floating in the ocean.

(If you have more than a day, consider a sailing holiday to the Greek islands!) 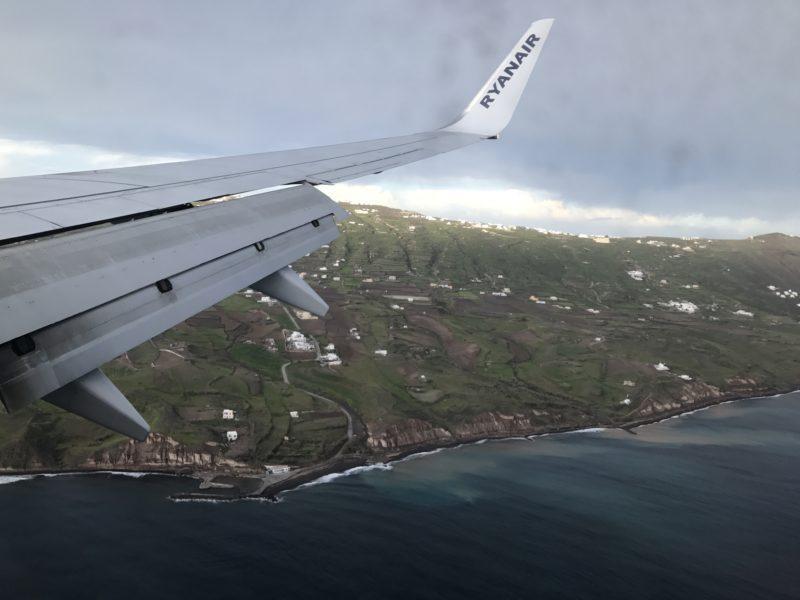 Santorini, I see you 😀

Your first stop of the day should be the Akrotiri Archaeological Site. It’s not widely known about, but it was one of the highlights of my trip to Santorini. The ancient settlement of Akrotiri was destroyed when Santorini’s volcano erupted. But, like Pompeii, the layers of volcanic ash preserved the city. It’s a time capsule back to 4000 BC Minoan civilization. Go here for my article on how awesome this place is and why you need to go.

The public buses are the best mode of transportation on Santorini if you’re only there for a day. Most of the streets are not car-friendly. ATV’s are another popular transport, but you can’t go as far and as fast as on a bus. Taxis are another option, but the bus fare is always under 3 euros, regardless of where you’re going, whether to Oia, one of the beautiful beaches, or Akrotiri.

To get to Akrotiri from the airport, you need to take the bus to Fira (it’s easy to find, it’s the only bus option at the airport). From Fira, get off and transfer to the bus going to Akrotiri. The bus “stations” (usually just an open space with a plethora of buses) are chaotic, but most of the drivers understand English and will be able to help you get on the right bus if you get confused. 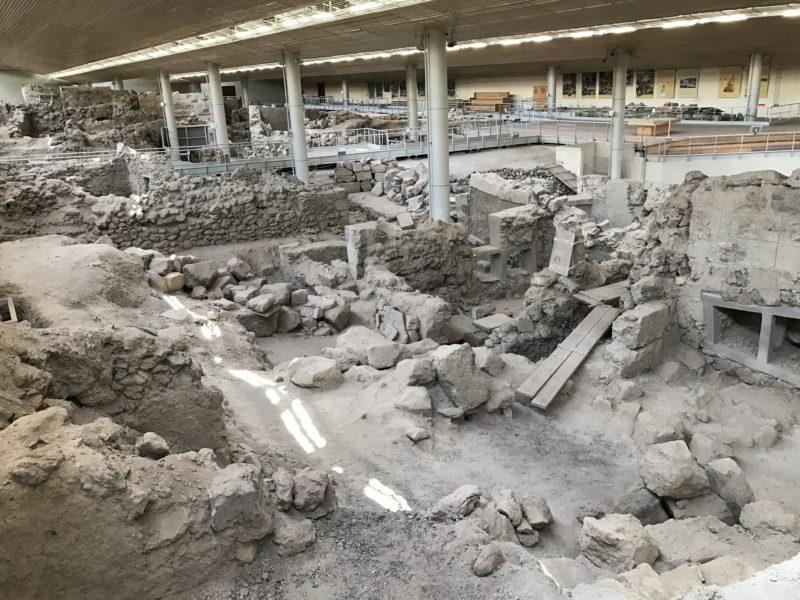 Akrotiri: the streets and buildings are almost entirely intact

Note: All times from here on out are approximate, as your schedule will be dependent on the buses.

I say “ish” because, despite the myth that they run on GMT (Greek Maybe Time), the buses do run on a schedule…but that schedule is subject to change. Hence, my above “note.”

Tickets to the archaeological site alone are 12 euros. Or, you can get the combo ticket for 14 euros, which I suggest doing. If you also want to visit any of the museums on the island, the combo ticket will save you a few euros. I’m including one of them on the itinerary, so if you follow this plan, get the upgraded tickets.

You don’t need a ton of time at Akrotiri because the site is small, but it’ll be about an hour before the bus comes back. Might as well enjoy it! 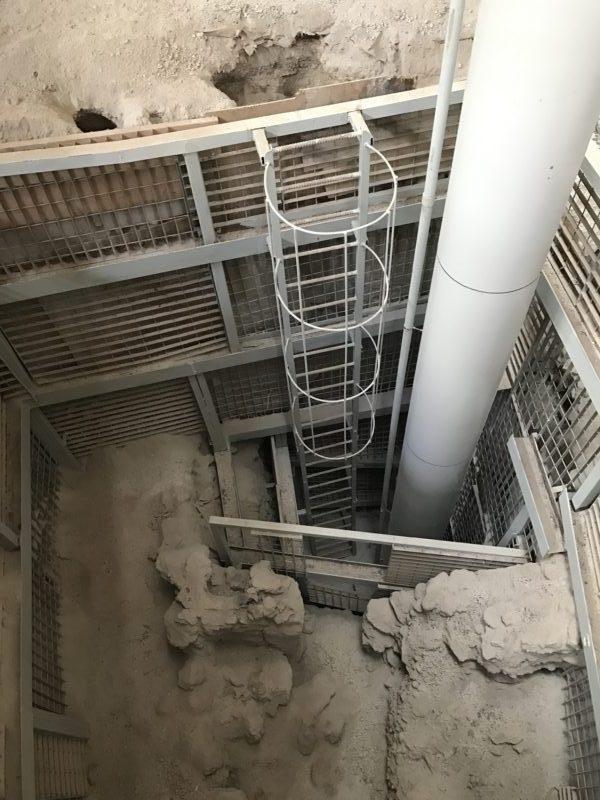 Look how deep the city was buried below the ash!

From Akrotiri, get back on the bus and get off at Fira.

FYI: Fira is also called Thira depending on what alphabet is used; you will see both names, so don’t let this confuse you, they are the same thing. But to make things more confusing, “Thera” is the ancient name of the island. You will also see that, but it’s not referring to the town of Thira/Fira. Lol. 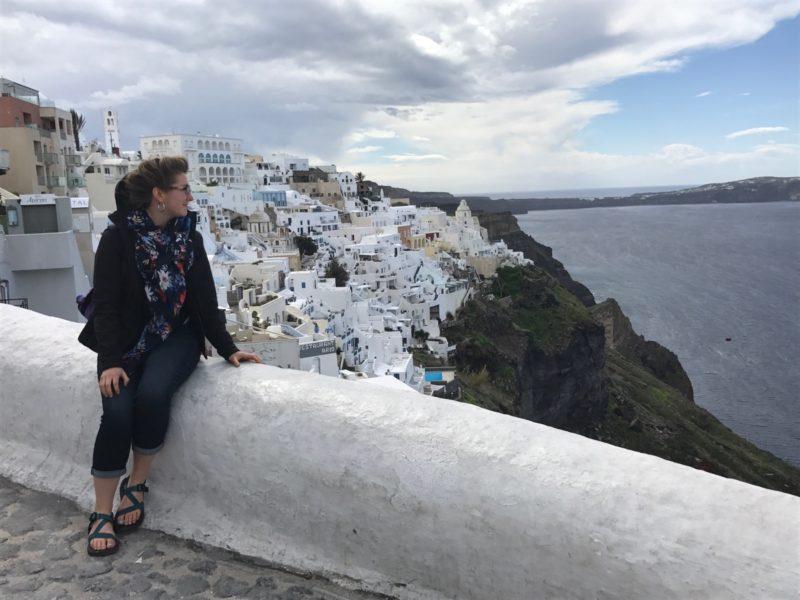 If you are here in the off-season, you don’t need much time in Fira – nothing is open until April. But it’s still fun to walk around the alleys and take pictures of the gorgeous view – because Fira is in the center of Santorini’s mainland, you can see both ends of the island from here!

I actually recommend visiting in the early spring, or even winter, as opposed to coming in the summer. It will make this one day in Santorini much more doable. We were there in March and were able to get around the island pretty easily. But one taxi driver told us that the normally 20-minute drive from Fira to Oia can take 1.5 hours during the summer because of the traffic. That kind of traffic would significantly limit what you can do in a day.

During the summer, the island also gets multiple cruise ships every day, each of which dumps thousands of visitors into the tiny streets of Fira. From what the locals told us, Santorini summers actually sound pretty miserable. 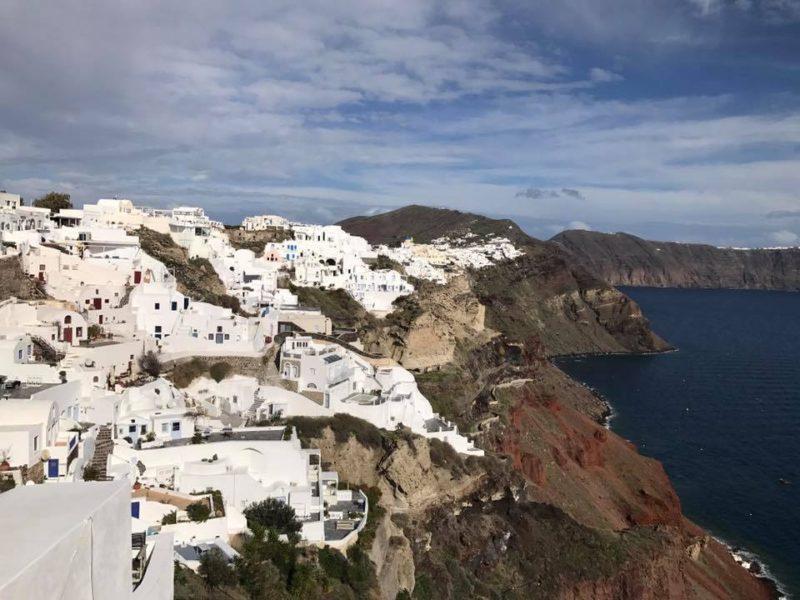 Make time to visit the Museum of Prehistoric Thera (especially if you got those special combo tickets), located near the Fira bus stop. It’s small, but it houses all of the original, beautiful frescoes that were taken from the Akrotiri site. It helps provide context to your Akrotiri visit and gives you a better idea of what the site would have looked like 4000+ years ago. 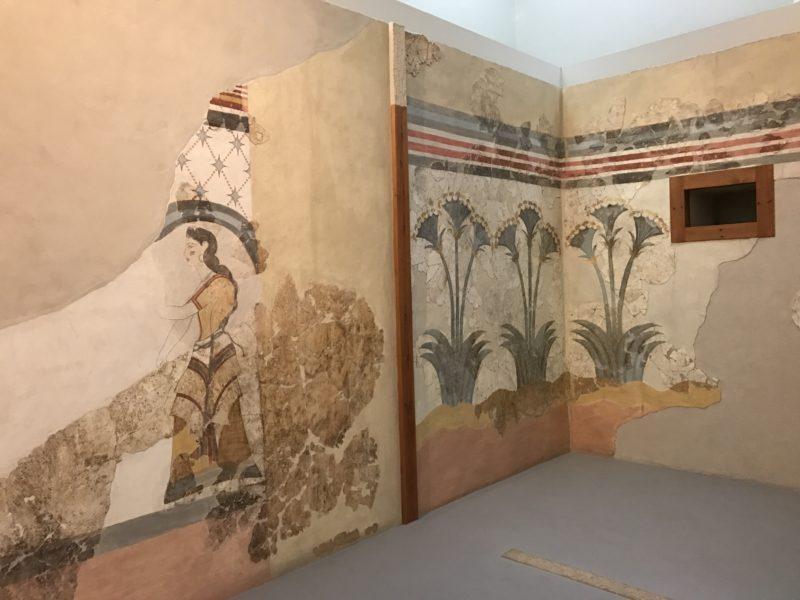 From Fira, catch the bus to Oia (pronounced ee-ya, though I can’t help myself and always say oy-yah). The ride is a very scenic 30 minutes that travels along the mountainous spine of Santorini to the northernmost tip of the island.

You know those pictures of infinity pools hanging over the Mediterranean, or tan, bikini-clad models posing against sparkling white buildings? Yeah, those were taken in Oia. Oia is Santorini’s signature aesthetically pleasing village and one of the most instagrammable places in Santorini. This is where you will want to spend most of your time during your one day in Santorini. 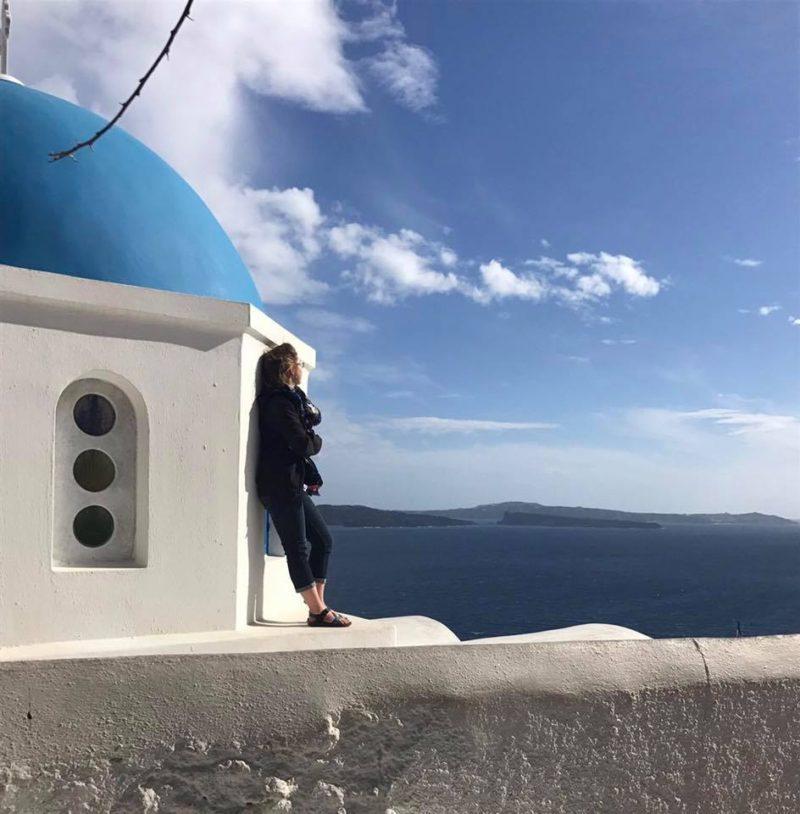 Like Fira, if you are here in the off-season, almost everything will be closed. But that doesn’t matter – you can spend hours wandering through the white-washed alleyways and not be bored at all. With eye candy everywhere you turn, you won’t want to leave!

Food tip: When we were here in March, there was only one (ONE!!!!) restaurant open, out of the hundreds that operate here in the summer. So….keep an eye out for that one restaurant when you get hungry for lunch! 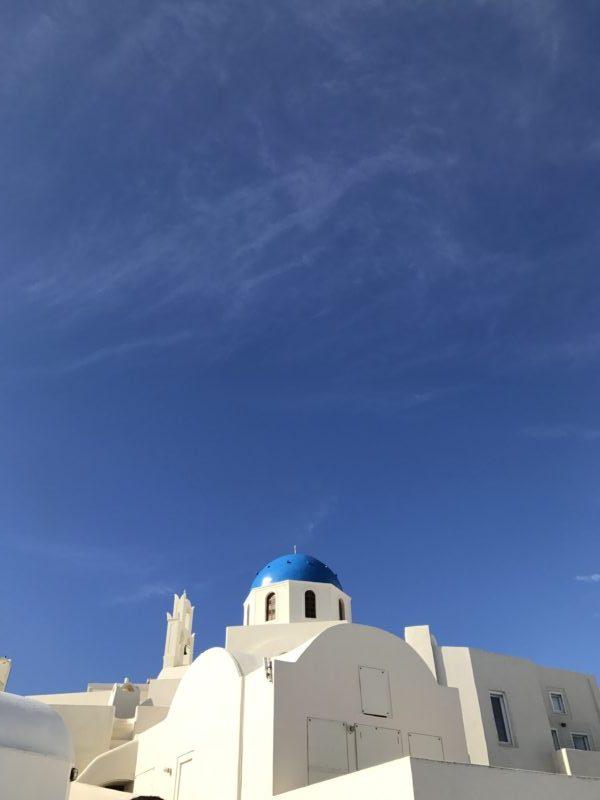 The color actually has an official name: “Santorini Blue” 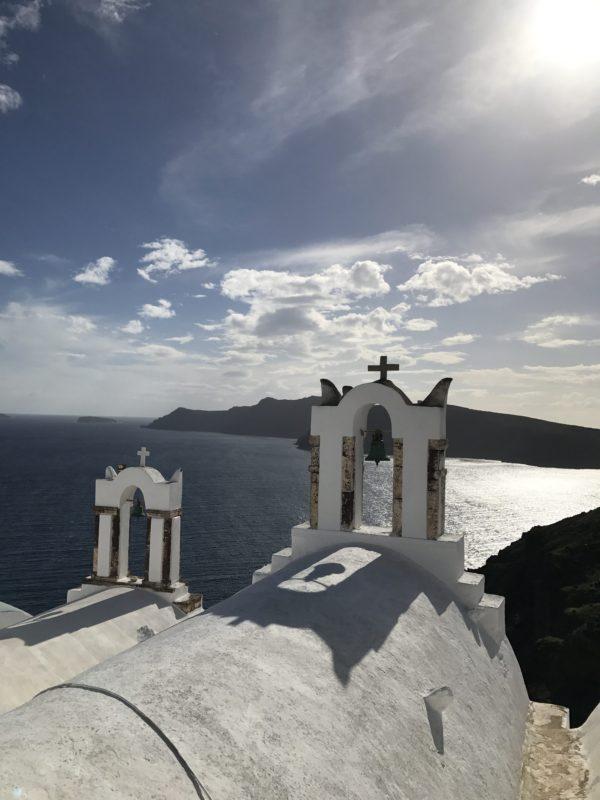 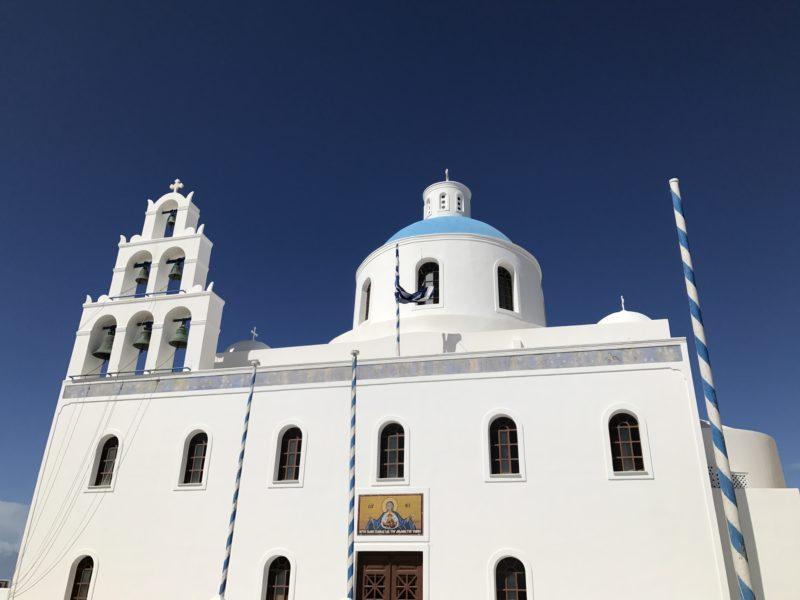 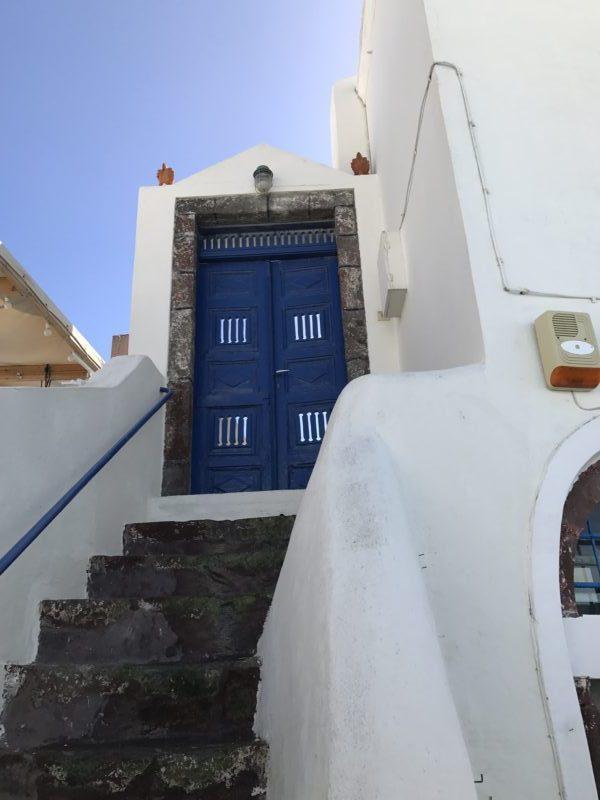 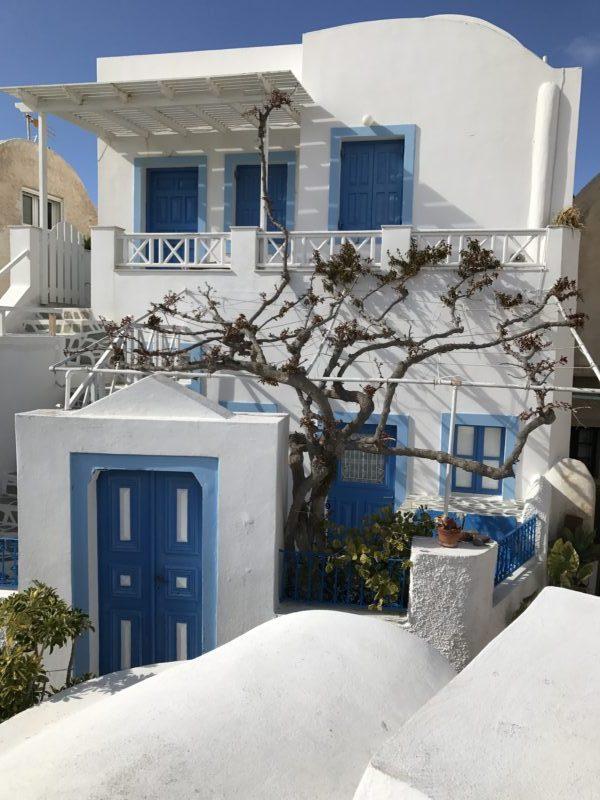 Related: Go diving in the Aegean from another Greek island, Paros !

6 PM: Head back to the airport

Maybe you’ll be luckier, but when we went the only flight back to Athens left Santorini at 7:30 PM – which means we didn’t have a chance to see the famous “Santorini sunset.” That’s one of the drawbacks of only having one day in Santorini.

The Santorini airport is tiny and only has flights in the morning and evening. That means that it closes in the afternoon and doesn’t open again until about 30 minutes before the first evening flight is scheduled to leave. So you don’t have to rush back to the airport, but you do have to remember that you will need two buses to get there: Oia to Fira, and Fira to the airport.

If you just can’t bear to leave Oia before seeing a Santorini sunset, you can always get a cab to the airport. Cabs charge at least 20 euros one way, as opposed to the 3 euro bus fare. You’ll be pushing your time if you take a taxi, as there aren’t THAT many cabbies in the off-season, but just know that that’s an option! 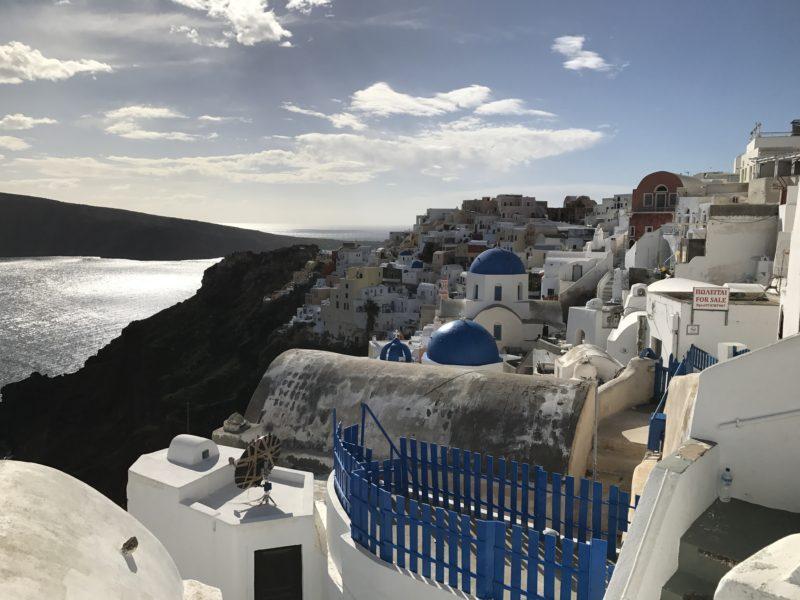 And with that, your one day in Santorini is already over! But it’s never too early to start planning your next trip back.

7:35 PM: Don’t be sad; start figuring out when you can visit Santorini again!

What to pack for one day in Santorini:

Have you ever been to Santorini? Did you have a YOLO experience, or did you think it wasn’t worth the hype? Let me know in the comments! 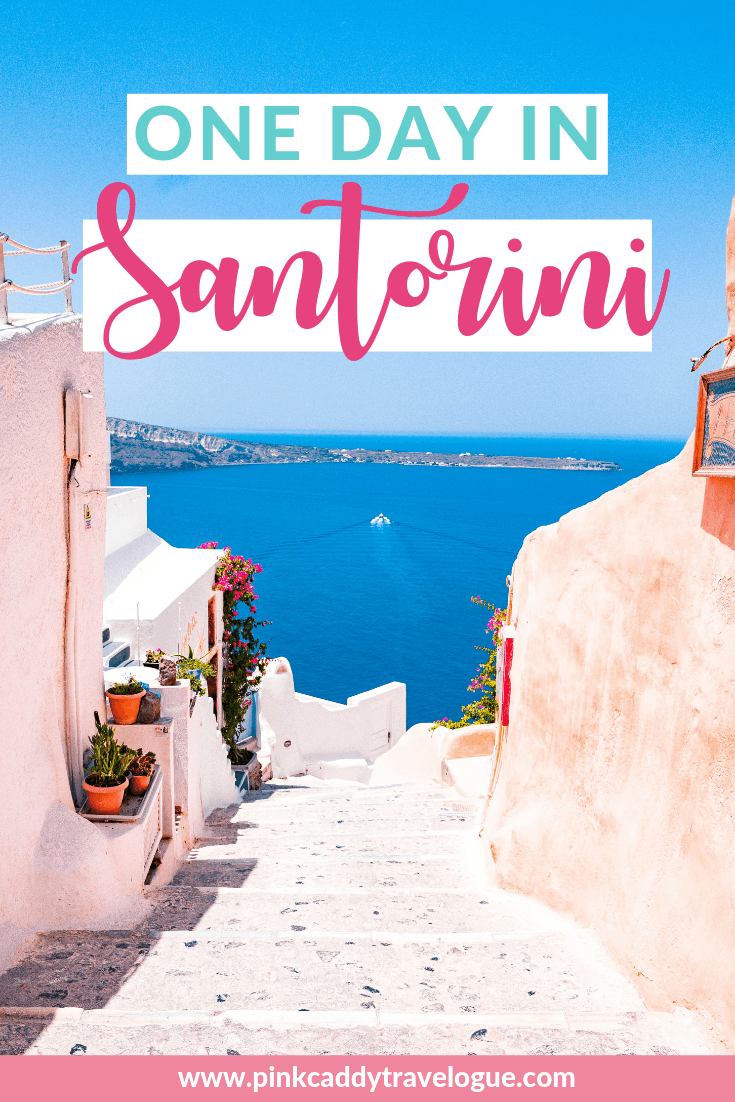 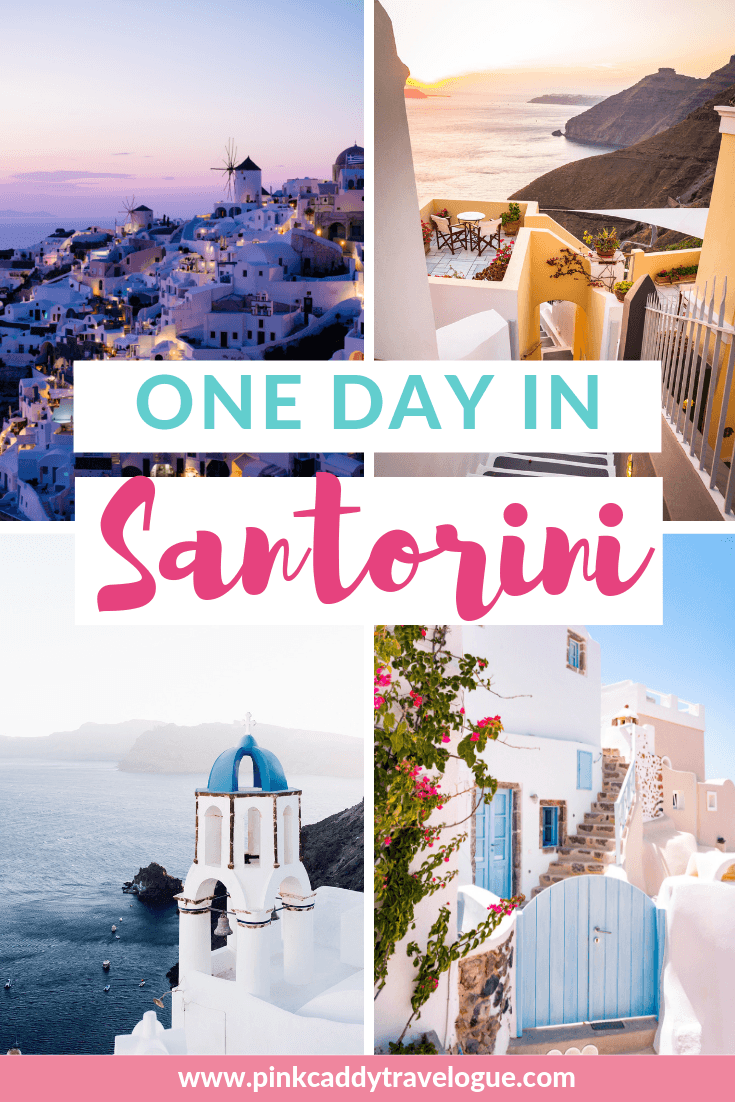 Check out this post for 14 more things to do in Santorini!

One Week in Greece Itinerary

How to Create an Awesome Vacation Itinerary