Want real Italian food without traveling all the way to Italy? Read on for the fantastic cooking class in Virginia you should check out.

If you’ve ever been to Italy, you know one thing to be true: it’s darn near impossible to ever enjoy “Italian” food again once you’re back home. Boxed Barilla noodles just aren’t the same as freshly cut pasta. But you can’t simply pop over to Italy every time you want a dish of spaghetti that isn’t smothered in tomato sauce from a jar.

Fortunately, there’s a way to have honest-to-goodness straight out of Nonna’s kitchen Italian cooking without purchasing a too expensive overseas flight. One chef is bringing the tastes of his beloved Italy to kitchens all over Virginia. 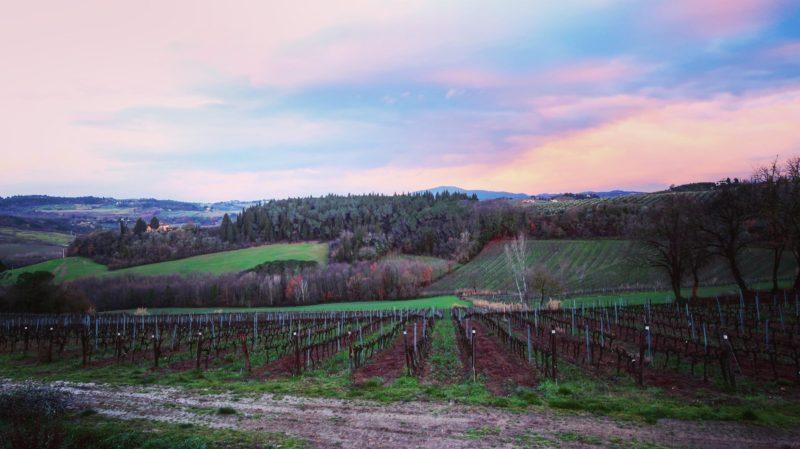 My mom and I recently spent a Saturday at an all-day Italian cooking class in Virginia, not too far from where either of us live. And yes, I did say all-day cooking class. We were surrounded by wine, cheese, and pasta for an entire Saturday – and we weren’t even in Italy.

Before I go any farther, know that this is not a sponsored post. My mom and I took this class for fun and because we love Italian food, and I enjoyed it so much that I wanted to share the opportunity with all of you.

Lush, verdant rolling hills, estates tucked away at the base of the mountains. Twisting rows of grapevines lining quiet country roads. It may not actually be Tuscany, but Hume, Virginia may be as close as you can get in the United States.

Just an hour from Washington, DC, it’s here that Bill Abruzzo and his wife have their home away from the hectic world inside the Capital Beltway. Both work primarily as lawyers in the city, but Bill indulges, and shares, his life-long love of all things Italy through cooking classes in his home.

Bill grew up in an Italian American family in New Jersey. Food played a central role, with his mom and grandmother pouring hours of work into every Sunday dinner and holiday meal. Inspired by the Abruzzo family traditions, Bill has spent the past 35-some years traveling to Italy and learning the art of traditional Italian cooking. He’s even published a cookbook, In the Footsteps of Nonna, which features his take on authentic Southern Italian cuisine. And on his weekends, he invites people into his home to learn how to make some of these dishes themselves.

When my mom and I found out that we could take an Italian cooking class in Virginia and learn how to make meals we had had in Italy, we jumped on the opportunity. So one sunny Saturday morning, we pulled up in front of the Abruzzos’ Tuscan yellow home in Hume, aprons and appetites in tow.

And good thing! Because the first item on the agenda was dessert.

Each class at Bill’s home can have up to six people, but we just had four – my mom, myself, and another couple. Such a small number makes for a more intimate and personable experience and a never crowded kitchen.

So the four of us started slicing up the strawberries for the tiramisu. If you know tiramisu, that might sound odd. Because the Italian menu staple is traditionally made with espresso, not strawberries, with layers of coffee-dipped ladyfingers and whipped cream and mascarpone cheese. Sort of like a coffee-flavored dessert lasagna. 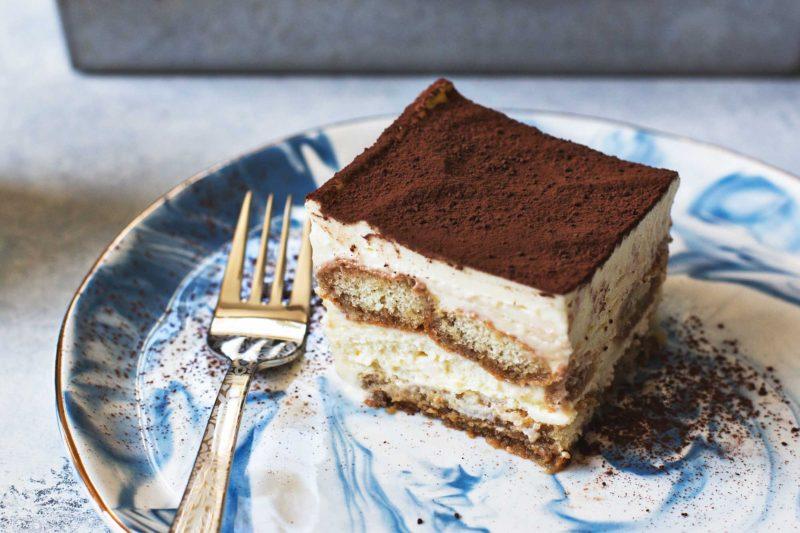 But Bill came up with the idea to make the dish a bit more summery by swapping the coffee with strawberries, hence the strawberry-slicing.

One of the great things about a cooking class with Bill is that he is extremely organized. When we first arrived, we each had a place on the counter set up with a cutting board, various utensils, and recipes for everything we’d be making that day. He also had most of the ingredients separated and ready to go. Including two separate bowls of strawberries, one for the tiramisu sauce and one for layering. I missed this memo and combined strawberry slices from both bowls, but it worked out 😛

After putting together the tiramisu (and eating half a package of ladyfingers in the process) we put it into the refrigerator to set. That would take a couple of hours, so Bill filled the time by taking us on a field trip through Hume and over to one of the local wineries.

Hume is in the heart of Virginia wine country, and Rappahannock Cellars is just one of many wineries in Fauquier County. But Bill and his wife happen to be members there, so they and any of their guests can get some preferential treatment. So off to Rappahannock Cellars we went.

We enjoyed our 6-wine tasting in the members-only barrel room along with a sampling of snacks that Bill had brought along to go with our wine: cantaloupe topped with prosciutto, homemade fig jam, and an assortment of Italian cheeses. 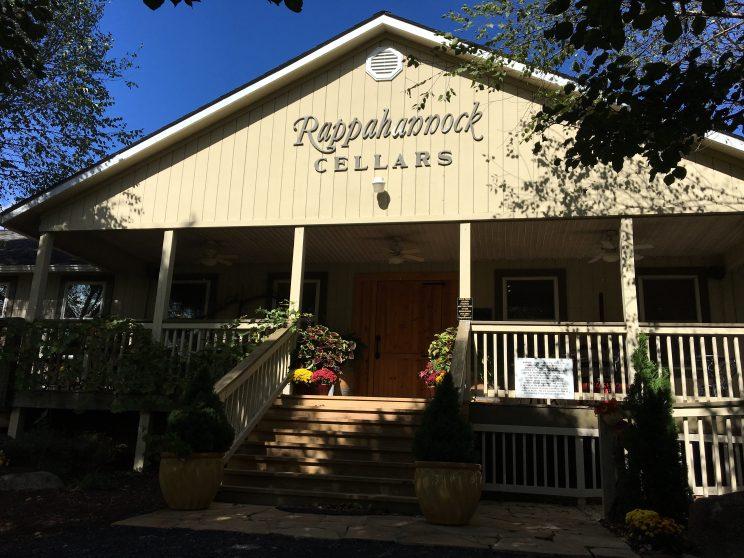 Back at the Abruzzos’, it was pasta-making time. Squid-ink pasta is not something you’ll see very often in Italian restaurants in the U.S. (at least, I’ve never seen it), but it’s very popular in Italy. It’s a dish that originally hails from the island of Sicily in the southernmost part of Italy. The squid ink adds a touch of saltiness and ocean essence to pasta and a strikingly different color from the typical yellow.

There’s nothing more iconically Italian food-wise than pasta. In many restaurants in Italy, you can actually see the noodles draped over racks, drying for later use. But I’ve always thought making homemade pasta seemed like a daunting task. I imagined having to bring out a ruler and cut every individual strand of pasta just right. And just forget about how to make all of the different shapes and twirls! But, turns out they make handy-dandy pasta cutting machines. Which, in hindsight, does make a lot more sense. 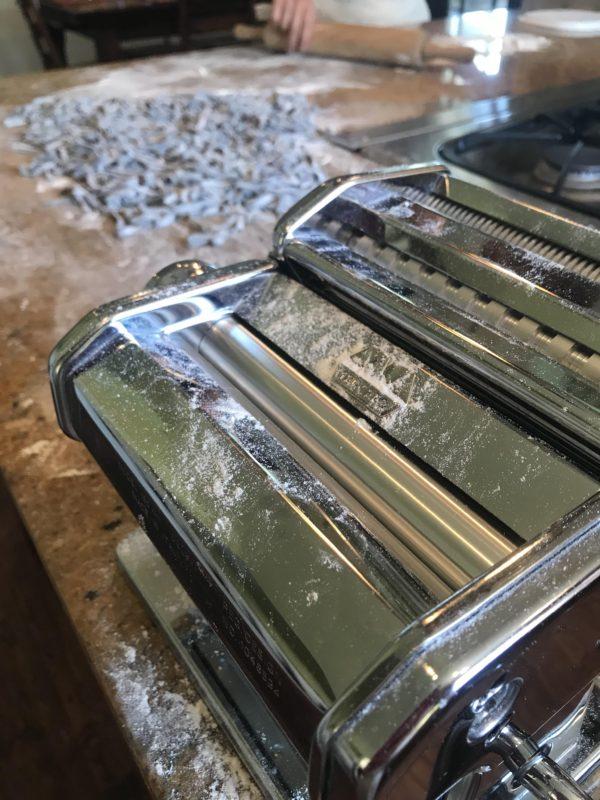 We made an assembly line for the pasta. One person cut the dough into strips while another person rolled the strips lightly in flour. The other two put the strips through the pasta machine. It wasn’t long until the entire counter was covered in wriggly pieces of gray dough! 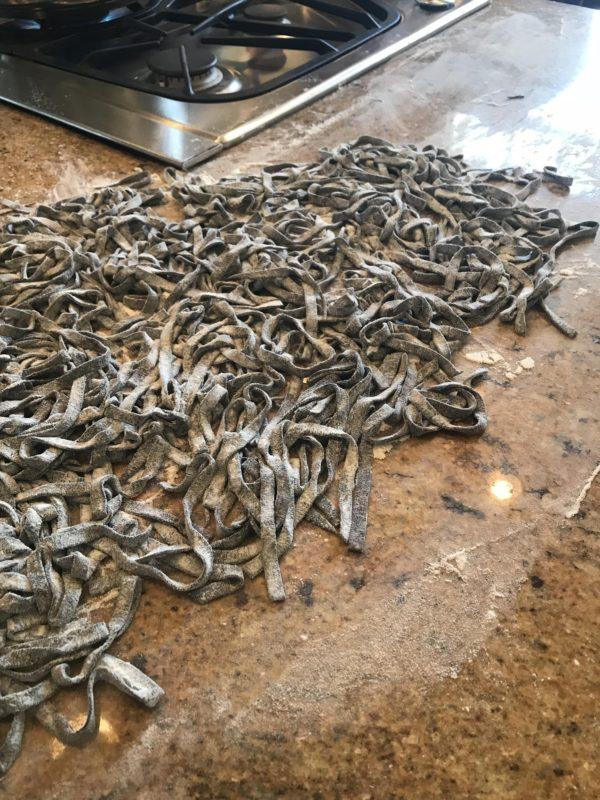 But you can’t eat JUST pasta. Well, I guess you could. But roasted shrimp and tomatoes is a lovely addition. So while the shrimp simmered in olive oil on the stove, the four of us set to chopping again, this time fresh oregano and thyme straight from Bill’s own vegetable and herb garden.

In between chopping herbs and kneading dough and drinking wine, Bill shared stories. Stories about his Italian family, his many, MANY trips to Italy, how he ended in Hume. When you take a class, you don’t always get to know your instructors very well. But with such a small group and a full day together, this class was definitely the exception.

In Italy, meals are served in courses, often with the meat or protein as a first course. So once the pasta toppings were done, we set down at the table for our own first course. The roasted octopus, as exotic as it sounds, was the least work-intensive item on the menu. The octopus had boiled for an hour while we worked on the tiramisu and then was roasted in the oven. That’s it. Paired with a green salad, it was a light and lovely start to the meal.

Next, the pasta. The strands were transformed into jet-black noodles once they were cooked. We piled them onto each person’s plate and topped them with the shrimp and tomatoes and herbs.

Squid-ink pasta won’t win any beauty awards, but it will make your taste buds very happy!

Last, but certainly not least: the Strawberry Chambord Tiramisu. For the record, strawberries make an excellent twist on this traditional dessert. 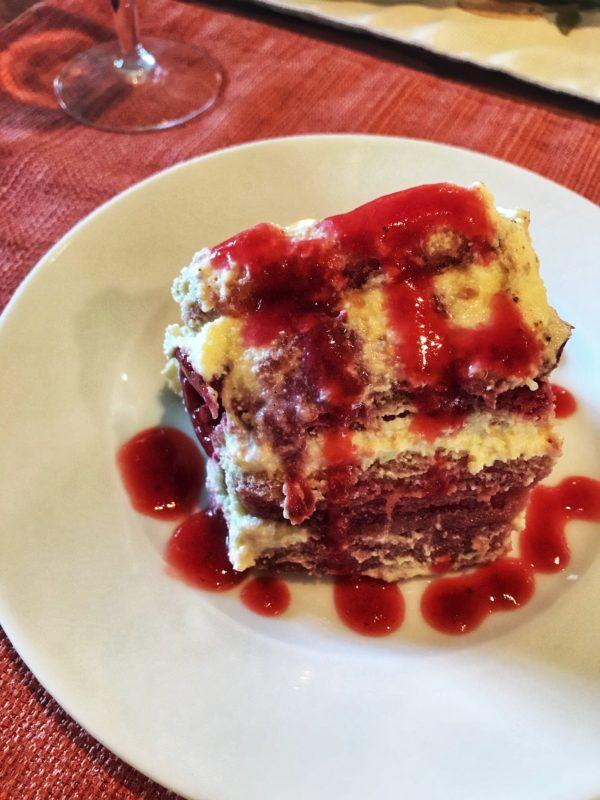 For a few hours that Saturday, we felt like we were back in Italy, exploring the hills of Tuscany, canals of Venice, or beautiful beaches of Sardinia. We left the Abruzzo’s home that evening full of fabulous Italian food, stories, and tips for our next trip overseas!

If you live in the area or ever travel here and have a love for Italian food, I definitely recommend this cooking class in Virginia.

For information on how to book a class with Bill, visit http://www.recipesandramblings.com/. 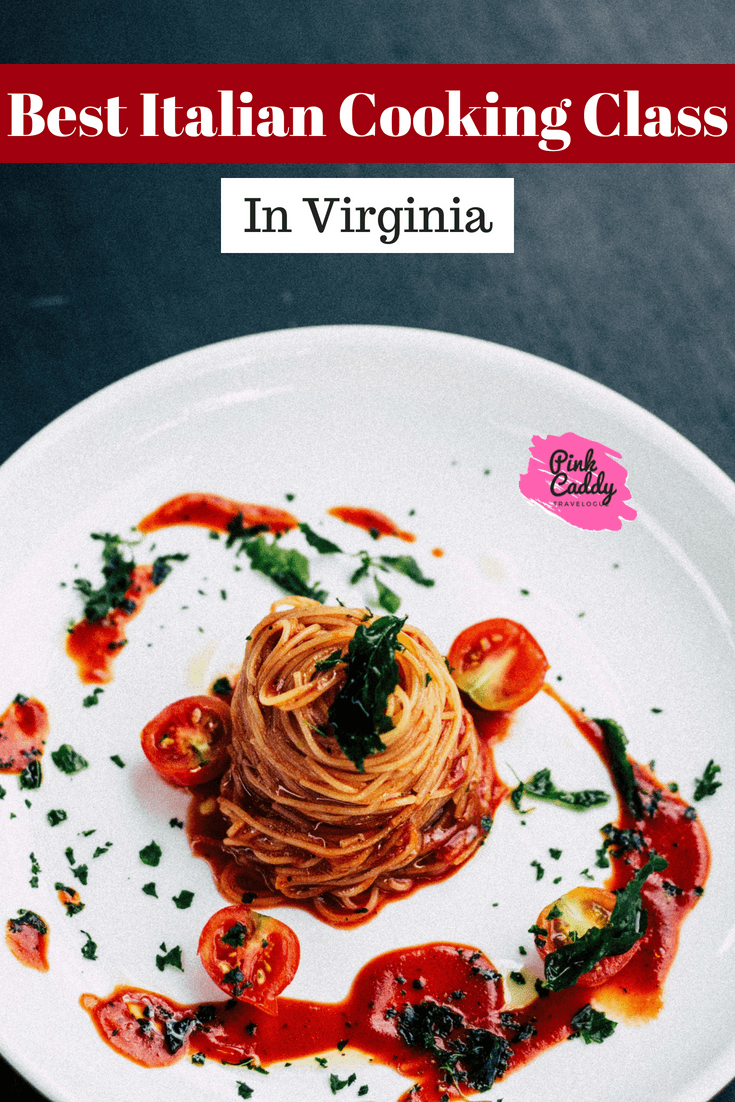 Best Wineries in Northern VA to Visit in the Winter

This website uses cookies to improve your experience while you navigate through the website. Out of these, the cookies that are categorized as necessary are stored on your browser as they are essential for the working of basic functionalities of the website. We also use third-party cookies that help us analyze and understand how you use this website. These cookies will be stored in your browser only with your consent. You also have the option to opt-out of these cookies. But opting out of some of these cookies may affect your browsing experience.
Necessary Always Enabled

Any cookies that may not be particularly necessary for the website to function and is used specifically to collect user personal data via analytics, ads, other embedded contents are termed as non-necessary cookies. It is mandatory to procure user consent prior to running these cookies on your website.