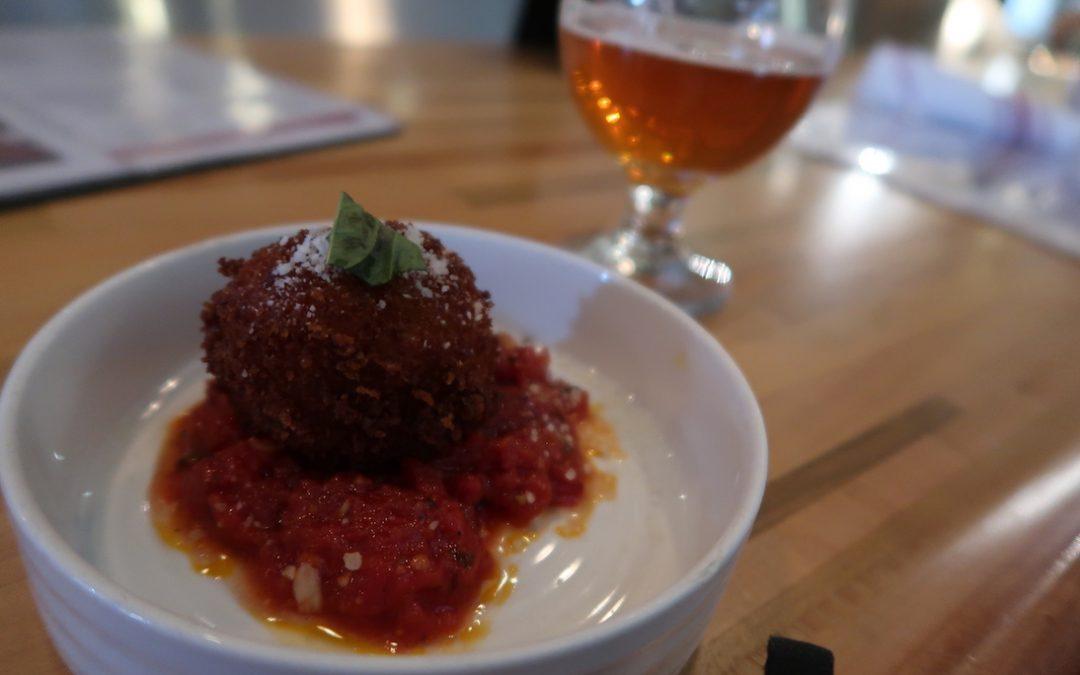 Looking to get off-the-beaten-path and learn about DC’s local history while eating delicious food? You need to book a tour with Fork Tours!

Even though I’ve lived in the DC area my entire life, I’m a little embarrassed about how little I know about the city’s history beyond the National Mall. I fall into the same trap as the vast majority of tourists who visit Washington – I can tell you all about Capitol Hill, the various Smithsonians, and the best times to see the Cherry Blossoms. But ask me about the unique history of one of DC’s neighborhoods and I’ll probably tell you to Google it.

So when I found out about Fork Tours DC food tours, it sounded like the perfect way to remedy my ignorance. Local history AND lots of homegrown cuisines? Yes, sign me up!

The founders of Fork DC Food Tours recognized this tragedy, that of the millions of visitors who come to DC each year, only a handful leave with any knowledge of the District’s own history. So in 2015, they set out on their mission to change that by introducing tourists to DC’s colorful neighborhoods while feeding them with delicious, local food.

And not only do their tours teach people about the city and its food, but a portion of each ticket sales goes to feed a district resident in need. So each food tour gives back to the community in multiple ways.

Fork Tours offers tours in several DC neighborhoods, including Georgetown and Old Town Alexandria. I ended up taking a tour through the U Street neighborhood, an area I frequent but know very little about – that is, until Fork Tours helped me out!

U Street is one of DC’s most culturally vibrant neighborhoods, and I’m not going to spoil the tour by giving you everything I learned. Instead, I’m just going to feed you some tidbits (see what I did there?) to convince you that this is a DC food tour you NEED to take!

If there’s one restaurant in DC that every local knows about, it’s Ben’s Chili Bowl, the natural starting place of the U Street food tour.

In the mid-1900s, during the Jim Crow-era, DC’s U Street was the heart of what was known as “Black Broadway,” the cultural epicenter for African American musicians, authors, and artists. It was the city’s jazziest neighborhood, and even though it has since undergone changes wrought by gentrification and other economic factors, one neighborhood restaurant has remained absolutely unchanged since it’s opening in 1958 – Ben’s Chili Bowl. 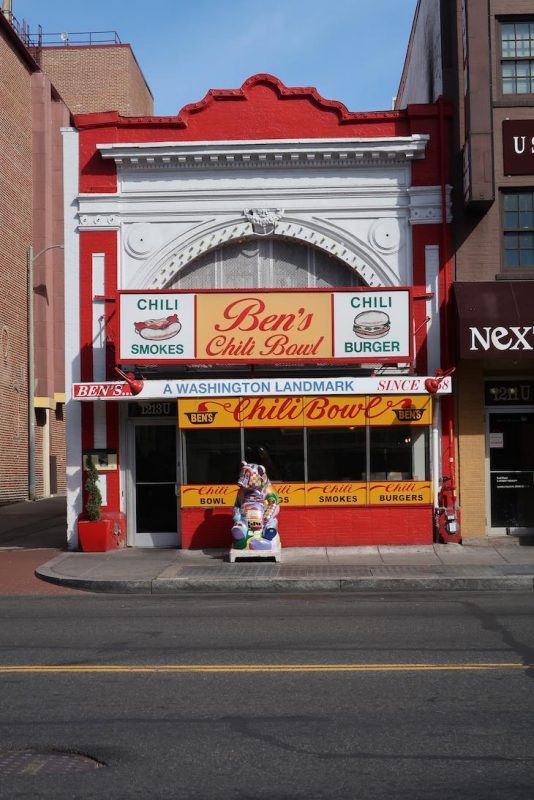 Ben’s is the home of the half-smoke, a beef and pork sausage made from Virginia and Maryland meats, topped with a chili that’s infused with spices from founder Ben Ali’s native Trinidad. Today the half-smoke is the official food of DC. 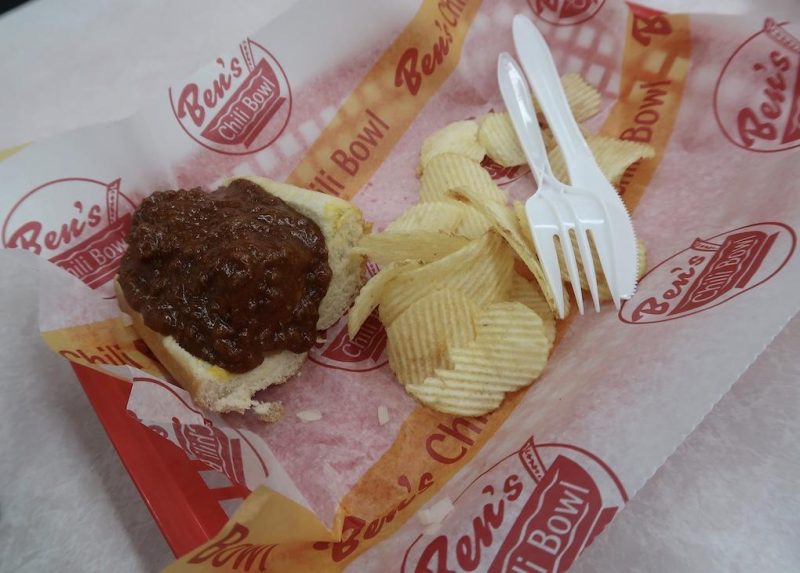 Ben’s is iconic not just for its food though. Because it’s at the heart of a traditionally African American neighborhood, it’s seen its fair share of important characters walk through its doors and historic events happen on the streets outside. Martin Luther King Jr. used the backroom to plan his March on Washington. When the DC riots started just outside on U Street after King’s assassination, Ben’s became a safe space where rioters and police officers alike could come in and get a meal. Since then, it’s become a right of passage for influential people to visit Ben’s when in DC. For example, Barack Obama visited just before his inauguration in 2009. 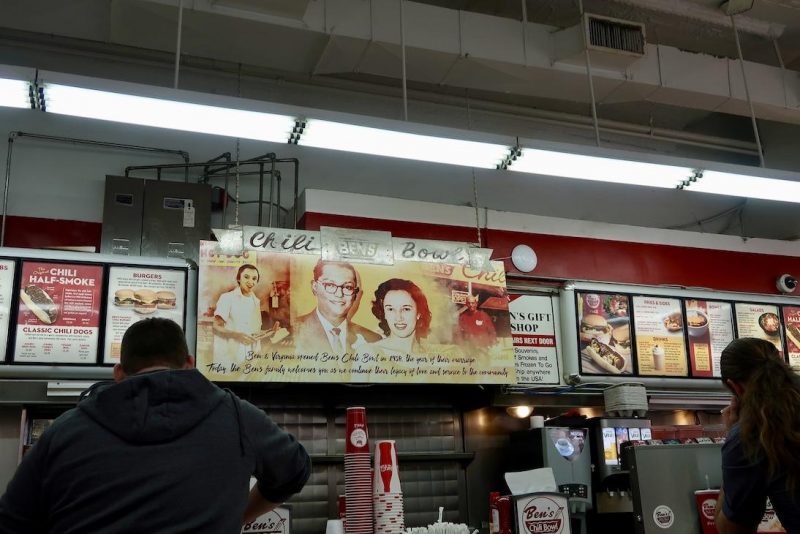 It was outside of this iconic DC landmark that I met up with the other guests and my tour guide extraordinaire, Tiffany. Though Tiffany has lived in France and Italy and studied food from all over the world, she’s a DC-area native with a passion for showing off her local community, making her the perfect person to lead a Fork DC food tour.

After sampling an iconic Ben’s half-smoke, we moved on to Dukem, one of U Street’s many Ethiopian restaurants. Washington, DC has the highest population of Ethiopians outside of Ethiopia itself. I have long appreciated this fact because I LOVE Ethiopian food (how many other restaurants can you go to where it is not only acceptable, but expected, to not eat with any utensils?!), but I’ve never understood how DC ever became “Little Ethiopia.”

While savoring our meat-filled sambusas, Tiffany explained the multiple waves of Ethiopian immigration to DC, which started in the 1970s after the overthrow of Ethiopian Emperor Haile Selassie. She also taught us about Ethiopian spices, how to make the utensil-replacing spongy injera bread, and Tej, Ethiopian honey wine that I had never heard of. 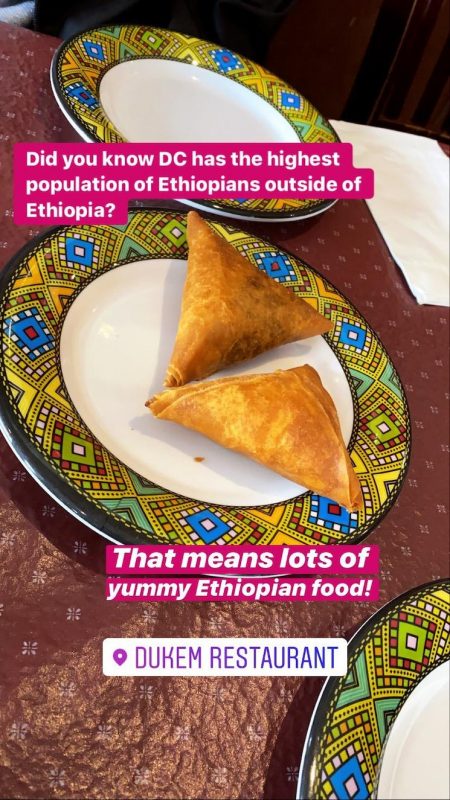 Ethiopian Sambusas! (Blogger fail: the only pic I took was uploaded to my IG story; we all make mistakes lol)

From Dukem, we wandered past several other U Street landmarks, such as Florida Ave Grill, the oldest soul food restaurant in the world (you may have seen it recently on Netflix’s Ugly Delicious!). Cardozo High School is another neighborhood staple, where Marvin Gaye, J. Edgar Hoover, and John McCain Jr. all graduated from. 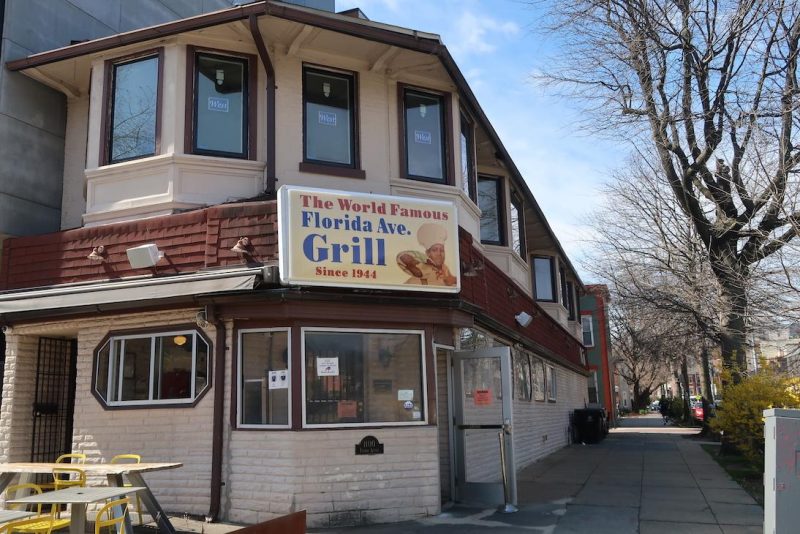 The neighborhood also has a number of incredible murals, depicting important community icons, such as Duke Ellington, Billie Holliday, and Louis Armstrong. 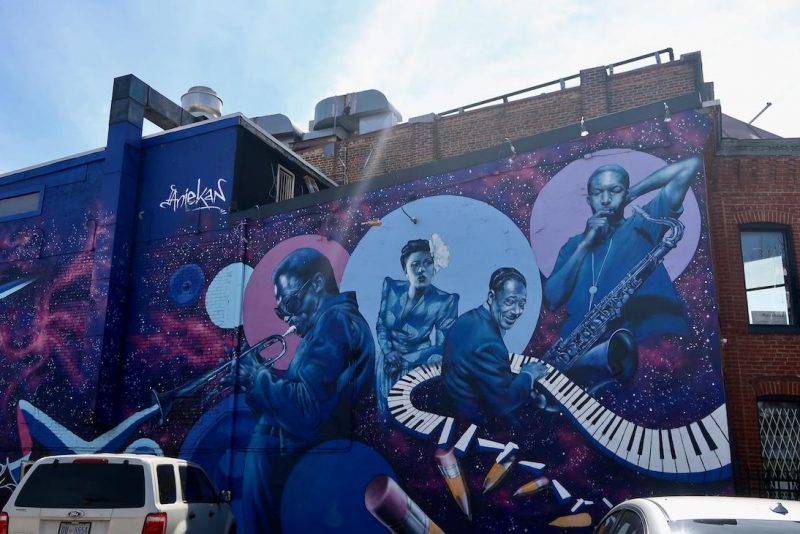 One of U Street’s beautiful murals

Just a couple blocks from where we started at Ben’s is the bustling 14th Street Corridor. In 1968, the DC race riots broke out on the corner of 14th and U streets. In the 1980s, this corridor was home to DC’s red-light district. But after a few decades of incredible transformation, 14th street is now the home of some of DC’s hottest restaurants, some of which we got to sample.

The next restaurant on our DC food tour was Matchbox. Matchbox has a number of locations in the greater-DC area, but the original was this one, located in the oldest building on 14th Street. The restaurant opened in 2003, but the building itself has a colorful history. It’s been a bowling alley, automobile showroom, and Club Bali, where Billie Holliday, Louis Armstrong, and Cab Galloway all made names for themselves. 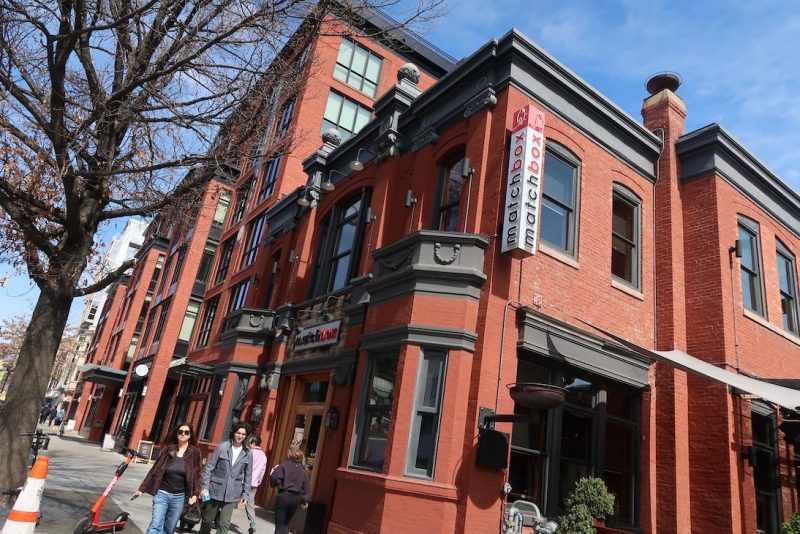 Matchbox specializes in wood-fired pizzas, mini burgers, and “elevated American bistro fare.” We got to try their signature Arancini, drool-worthy fried balls of risotto and fresh mozzarella, served with homemade tomato sauce. Alongside that, we sampled an IPA brewed at a nearby Virginia brewery, Lost Rhino Brewing Company. 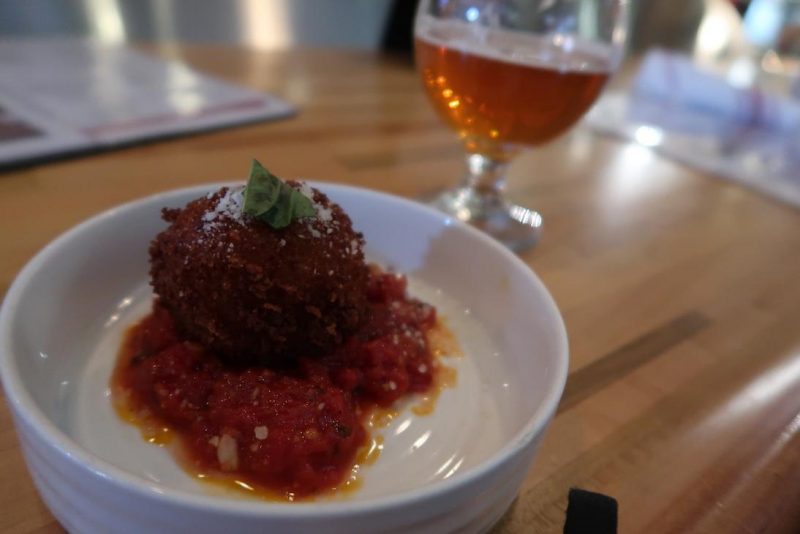 As the capital city of the melting pot that is the United States, Washington’s food scene is influenced by immigrants from all over the world. We had already tasted that once on this DC food tour via Ethiopian food. The fourth restaurant was another opportunity to travel internationally via food – Colada Shop. 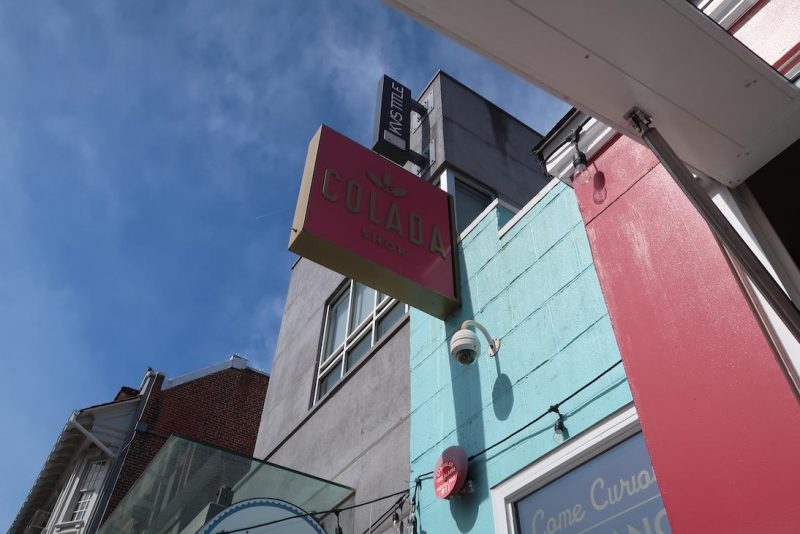 I was thrilled when I learned that Colada Shop was on our tour itinerary because even though I hadn’t had the chance to visit it yet, this hole-in-wall hotspot had been on my radar for a while. It makes frequent appearances on all the “must-eat places in DC” lists, and the ever-present line out the door is a testament to its popularity.

A “colada” is a Cuban-style of espresso meant to be shared, and that ethos is what the whole restaurant is based around. It’s a coffee shop, but not one where you’ll find people typing away on their laptops. Instead, the open-air style cafe, with its handcrafted coffees, cocktails, and Cuban fare is meant to be a social gathering place for friends and coworkers. And if all of their food is as good as the butternut squash empanada I got to try was, it’s no wonder that this is one of DC’s favorite all-day hangouts.

The last stop of the day was ice cream from Jeni’s, the only place on the tour I had been to before – many, many times. Jeni’s wasn’t actually born in DC, nor does it have any particular historical ties to the city. It’s just one of the best ice cream shops in the city and I had absolutely no complaints that this was how we ended the tour! 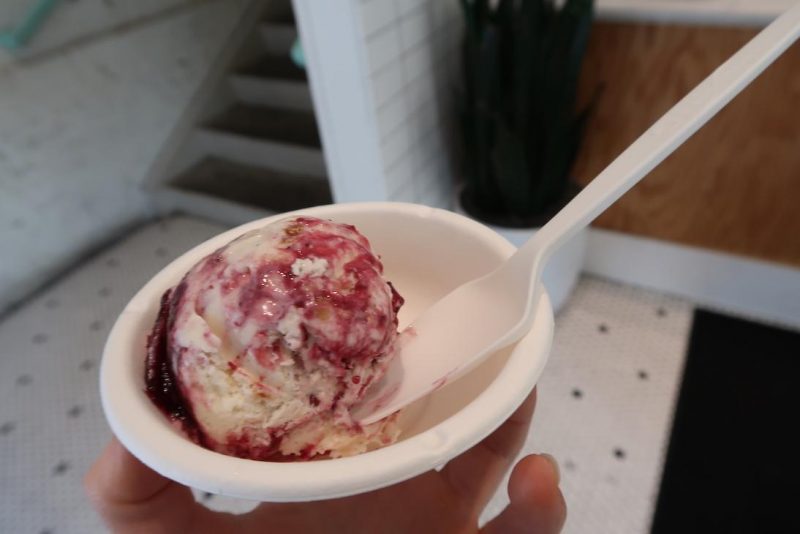 Brambleberry Crisp, one of my favorite flavors! 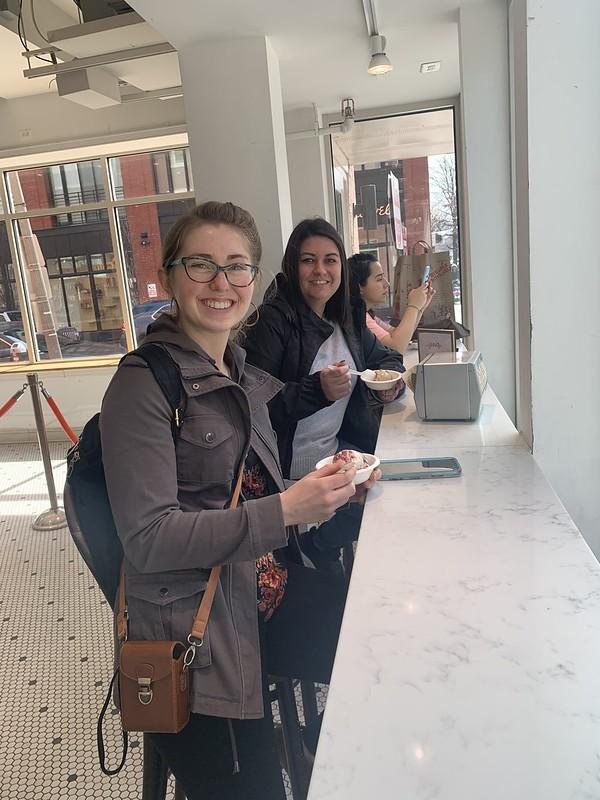 Fork DC Food Tour was hands-down one of the best food tours I’ve been on. Not only did I get to try A LOT of amazing dishes, but I was also overwhelmed by how much history I learned along the way. Whether you’re a DC local or a visitor looking for something to do besides the National Mall, this is a tour experience you definitely need to check out!

To see all tour options and to make reservations, go here.

*While Fork Tours offered this tour complimentary to me, all opinions are my own.

Looking for more foodie experiences? What about afternoon tea in DC? 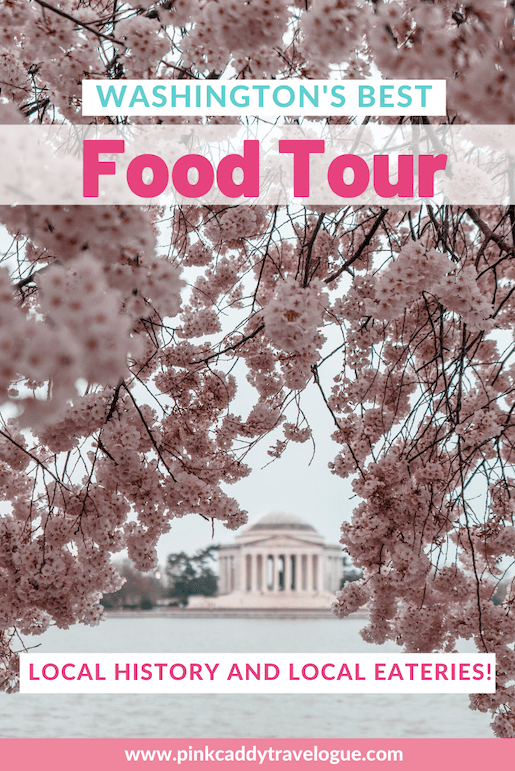 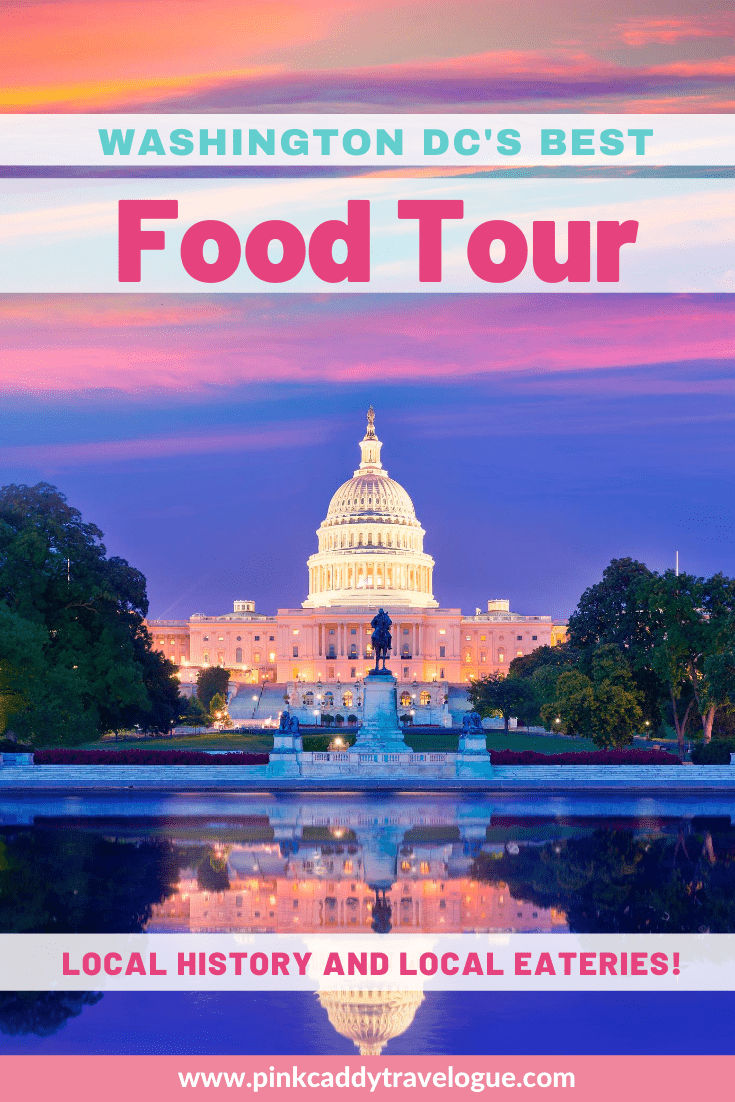 5 Cozy Wineries in Northern Virginia to Visit in the Winter