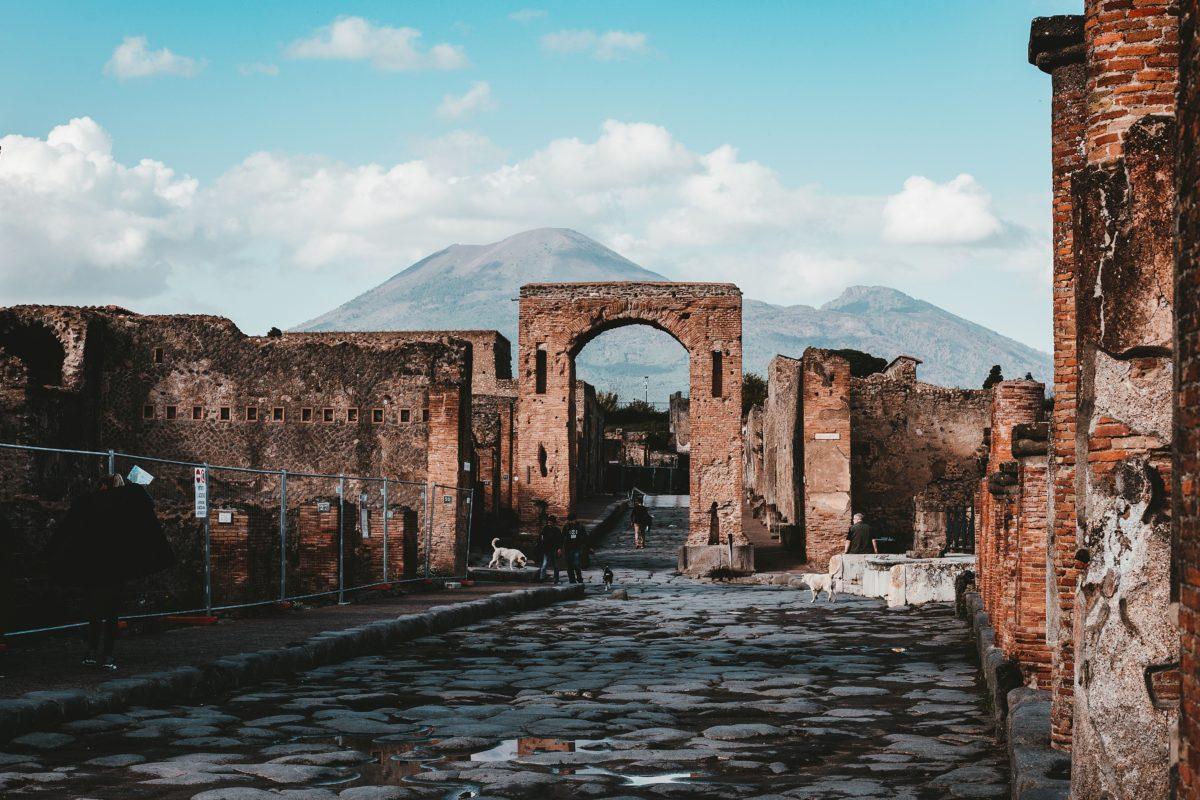 If you’re visiting Italy’s capital city, be sure to make time for a day trip to Pompeii from Rome. You won’t regret a visit to this fascinating site!

Of all the famous landmarks in Italy, Pompeii may be the most morbidly fascinating. It’s a city frozen in time; when Mount Vesuvius erupted in AD 79, nearby Pompeii was buried under nearly 40ft (12 meters) of ash and lava, preserving it just as it was for centuries to come. It wasn’t until 1748 that the forgotten city was rediscovered and historians were given a clear snapshot into everyday life in a Roman town.

It’s an eerily fascinating place – when wandering down the cobbled streets and into former homes and businesses, you get the impression that when the eruption came, everyone had been going about their usual business. They had no idea that their last acts would provide later generations with a window into ancient life. Pompeii’s paintings, furniture, tools for everyday life had all been protected from the normal decay of time. Excavators even found evidence of fruits and vegetables and full meals left on market stands. And though not the most significant discovery, most people are familiar with Pompeii’s human plaster casts –  the ghostly impressions in the ash left by the city residents who had been buried alive.

My family took a day trip to Pompeii from Rome after spending a week in the city. While you can easily spend weeks in Rome without scratching its surface, Pompeii was a highlight of that trip. I highly recommend dedicating a day of your Roman itinerary to exploring Pompeii. Besides, there are plenty of exciting things to do in Rome at night when you get back!  And since it’s just a short, scenic train ride from Rome to Pompeii, take the chance to get out of the city and step back in time to 79AD.

What to see on a day trip to Pompeii from Rome

Pompeii was once a prosperous, thriving city, with about 20,000 residents. While archaeologists have only uncovered a small portion, the site is still large and can easily take a full day to explore. To help you maximize your time, here are some of the highlights that you don’t want to miss:

When you enter the city from the main, west gate (Porta Marina), the first large site you’ll come to is The Forum. It was the center of Pompeii and the city’s political, commercial, and cultural core. It was the site of the main marketplace, the courts, baths, and several temples. Although only a few of the outer columns remain, you can still tell how large and impressive it once was. 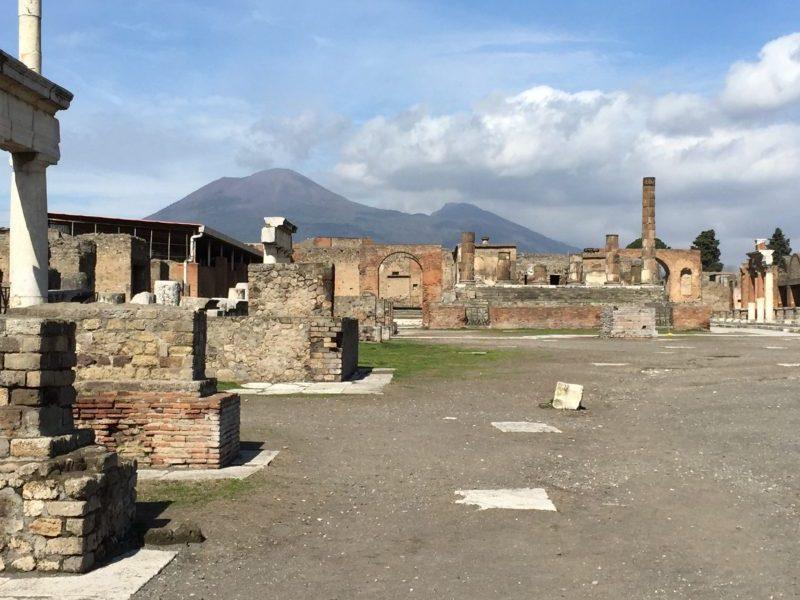 One of the Forum’s temples is the Temple of Apollo, believed to be the oldest building in Pompeii. Most of the temple’s original bronze statues are now in the National Archeological Museum of Naples, but a copy of Apollo and a bust of the goddess Diana stand in their place. 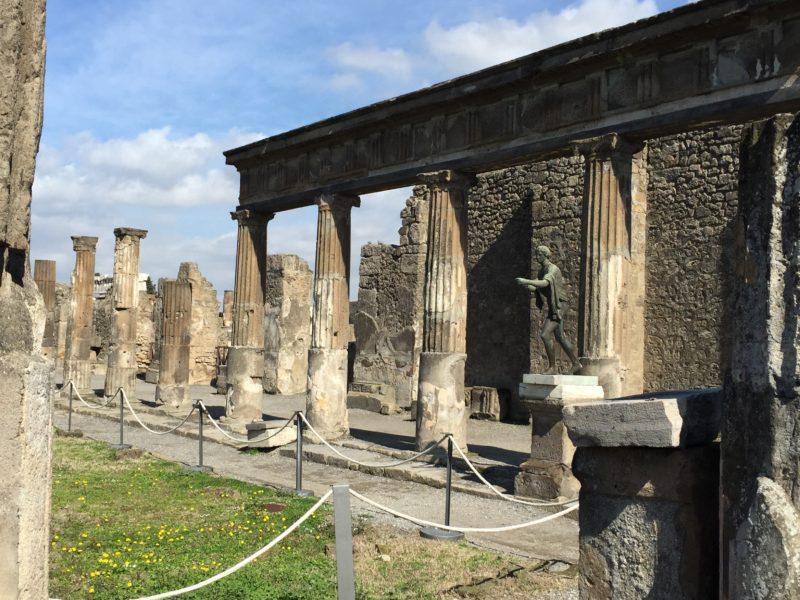 House of the Faun

This is the largest of the private homes in the excavated part of Pompeii. The House of the Faun takes up an entire city block. It was here that some of Pompeii’s most famous art pieces were discovered, such as the Alexander Mosaic and the bronze statue of a faun for which the house is named. The original Mosaic is housed in the Naples Archaeological Museum, but a replica is in its place to give visitors a feel for the grandness of the home. 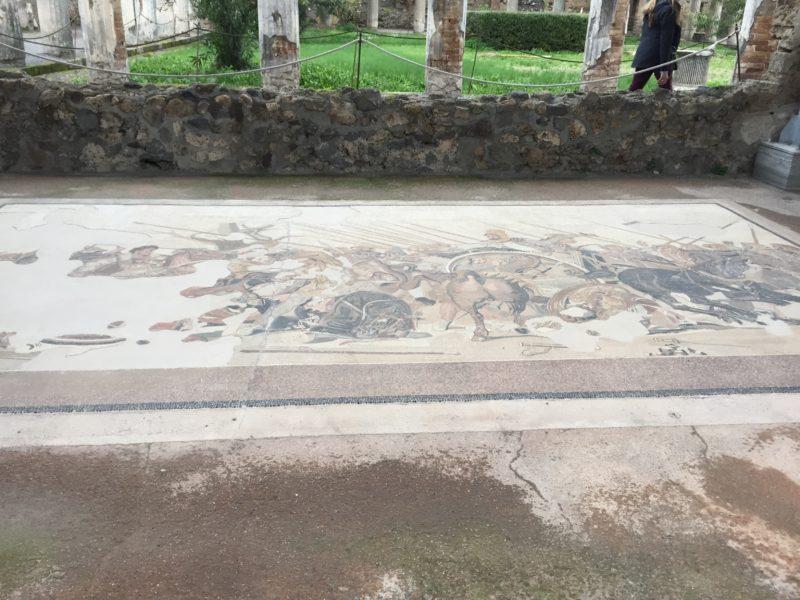 The Alexander Mosaic, which depicts Alexander the Great battling Darius III of Persia 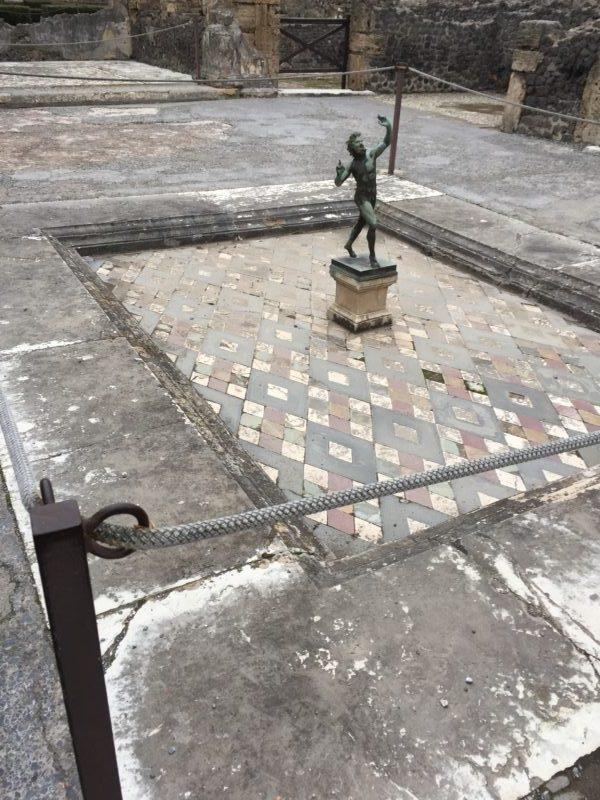 The house’s namesake statue of a faun

Pompeii has two theaters; the Teatro Grande, the larger of the two can seat 5,000 spectators. Today, it is still used for summer performances. Pro-tip: the top row offers one of the best views of the city and Mount Vesuvius. 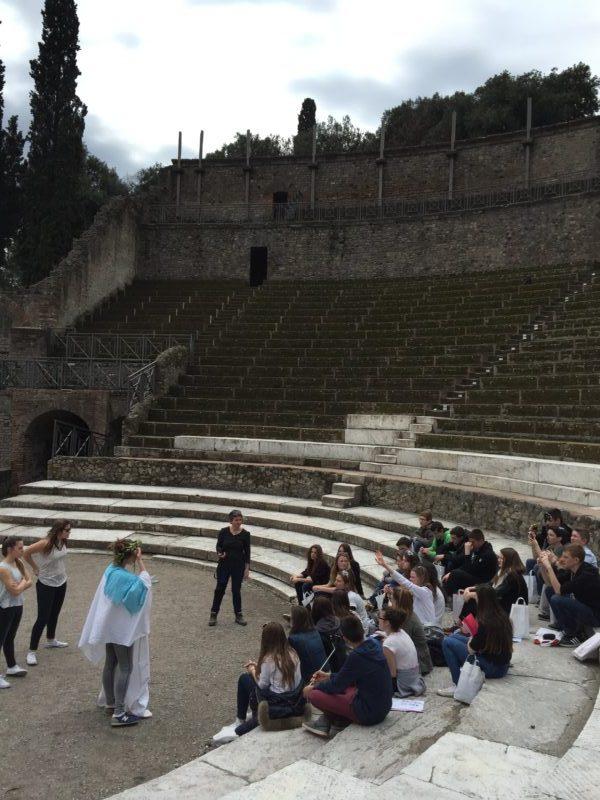 A school group having drama class in the Teatro Grande

At the opposite end of town from Porta Marina, at the end of Via dell’Abbondanza, is the Pompeii Amphitheater. Built in 80 BC, it is the oldest surviving Roman amphitheater in the world (the oldest in Rome wasn’t built until 29 BC). In its heyday, 12,000 spectators would fill its seats for shows and gladiator fights. 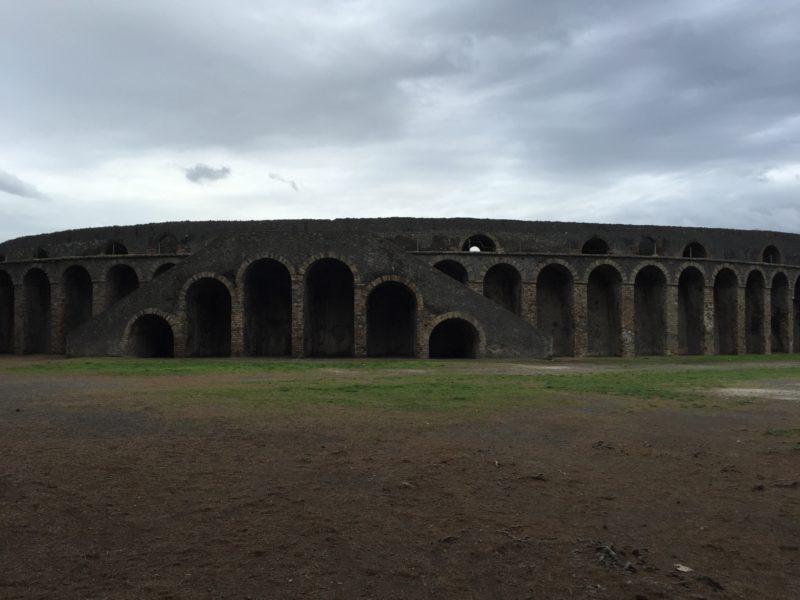 When Mount Vesuvius erupted, many people fled the city, but not everyone escaped in time. Those left in the doomed city were buried alive by dozens of feet of ash and lava. In 1870, Giuseppe Fiorelli developed a technique that resulted in Pompeii’s famous plaster casts, a must-see on a day trip to Pompeii from Rome.

Fiorelli filled the empty spaces in the ash layers where the corpses had decomposed with liquid plaster, which produced perfect casts of the victims of the eruption. Once the plaster had hardened, the surrounding soil was removed and the figure was brought to light. This technique was used to produce a number of casts of human bodies, animals, and objects. Many of these casts are located in a building on the west edge of town by the Forum, though there are several scattered throughout the city. It’s a little creepy when you come across one without expecting it! 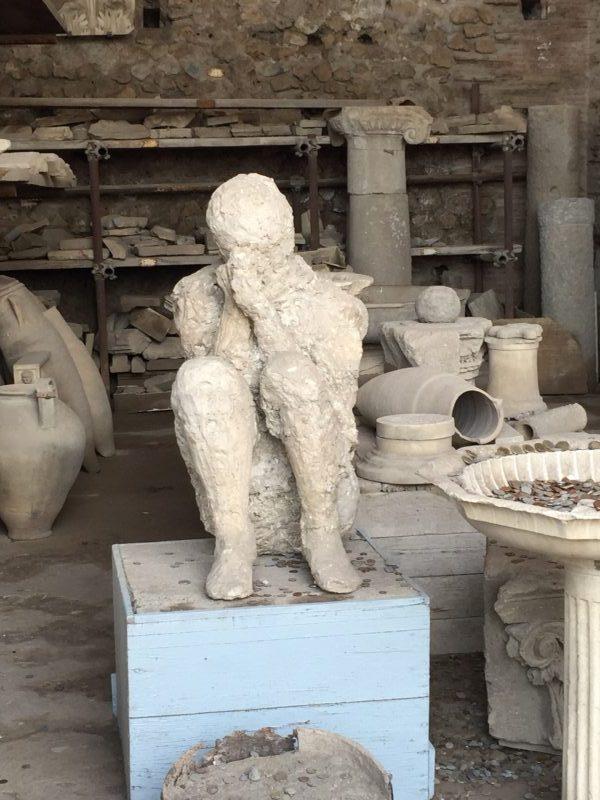 For more, check out this guide to visiting Pompeii!

How to get to Pompeii from Rome

From Rome’s Termini Station, take the high-speed train to Naples’ Napoli Centrale Station. You can see train times as well as purchase tickets in advance here.

Related: Check out some of the amazing restaurants nearby in Naples

What to Bring on a day trip to Pompeii

Despite being one of the most visited sites in Italy, Pompeii does not have many visitor facilities. There is only one restaurant of mediocre quality. Be sure to bring your own snacks, as you’ll be doing a lot of walking. And as there’s very little shade in the entire city, bring whatever sun protection you need- hats, sunscreen, etc. A water bottle is a necessity as well, but don’t worry about bringing enough for the entire day – there are several water fountains throughout the site that you can use to refill your bottle.

The tickets are €16. If you want to purchase them in advance or see more information on reduced ticket prices, go here. 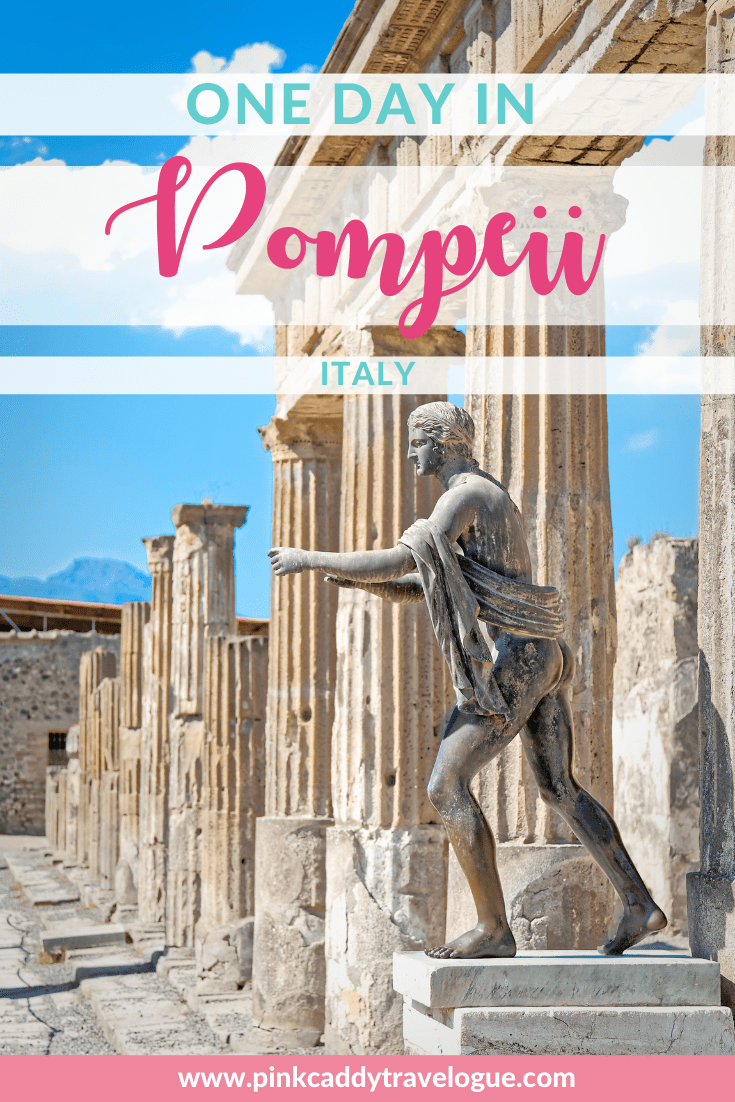 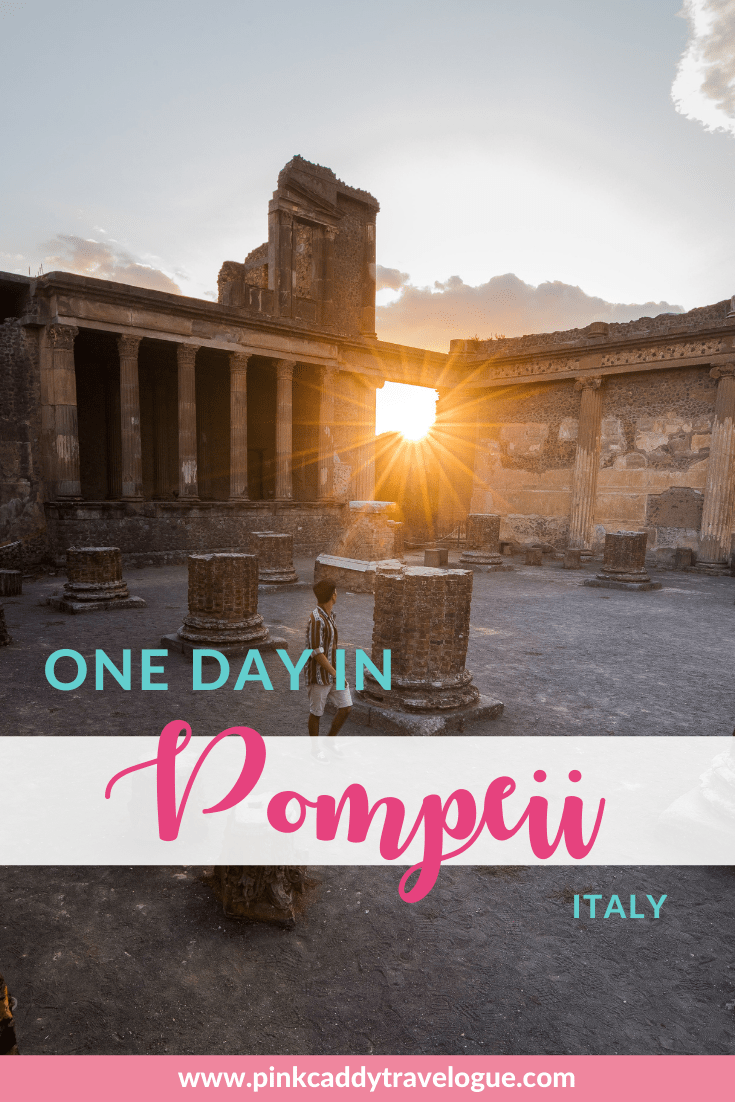 Headed to Florence instead of Rome? Be sure to check out my 7-day Tuscany itinerary!

Sintra Day Trip: What You Need to Know to Avoid the Crowds