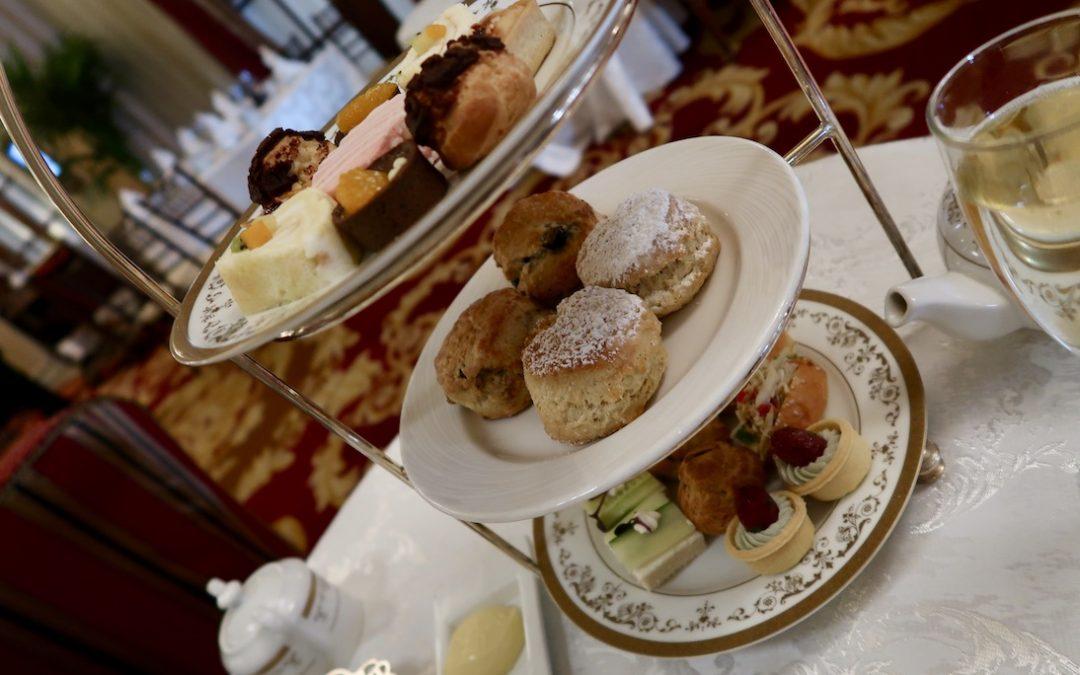 Looking for the best afternoon tea in DC? Go to the Willard Intercontinental, one of DC’s most famous and elegant hotels, for the royal treatment.

Afternoon Tea at the Willard Hotel

The Willard Intercontinental Hotel has been a pillar of DC high society for decades. Just two blocks from the White House, this is where anyone who is anyone visiting DC spends the night. Celebrities, foreign dignitaries, and almost every president since Franklin Pierce, the Willard has hosted more VIPs than almost anywhere in the city. And that truly is saying something.

The Travel Channel named the Willard as one of the top 10 places to enjoy tea like a royal, and Food Network lists it as one of the best tea spots in the country. It’s one of the best destinations for tea lovers visiting DC. With such accolades, it might seem that the Willard is a place completely out of reach for us normal peasants, people who aren’t members of the Washington Elite. But every weekend, among its gleaming marble columns and plush velvet curtains, the Willard breaks out its delicate china and invites people to indulge in a quintessential DC experience: afternoon tea at The Willard. 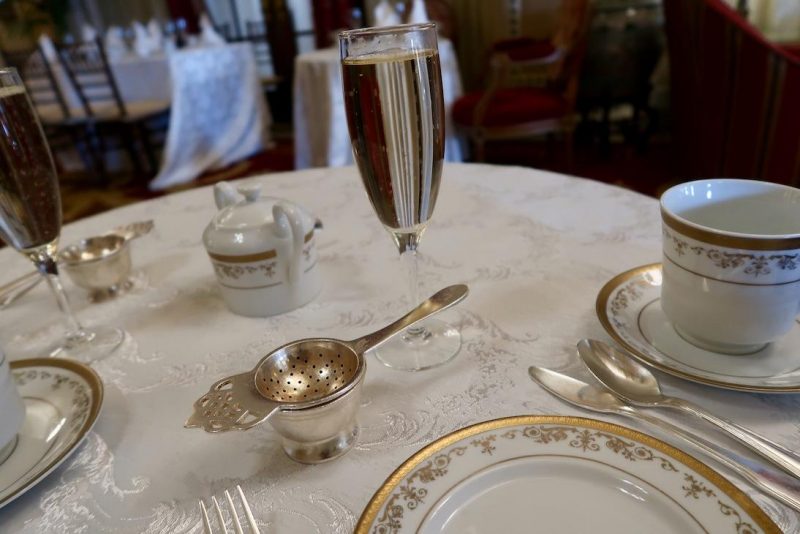 So what’s it like to enjoy a meal at Washington’s most storied hotel? For our birthdays this year, my mom and I decided to find out and treated ourselves to one of the best afternoon teas in DC.

History of the Willard

A huge part of The Willard’s popularity is due to its colorful past. Over and over again the hotel has played its role in shaping and changing American history.

Which is why it may come as a surprise that the world-famous hotel was started by a young man with very little experience from the backwoods of Vermont. Henry Willard was only 25 when, in 1847, he was invited to Washington to convert a row of rundown rowhouses into a successful hotel. He had some small luck as a proprietor back home but repeating that success in the nation’s capital would be a new ball game. But by 1860, he’d accomplished what he set out to do – establish a first-rate hotel and make money.

While Mr. Willard’s main goal was to make a profit, he unintentionally also established the perfect location for key historical events. The Willard’s proximity to the White House makes it an ideal place for unofficial government meetings, or for politicians to escape to when they didn’t want to be found. 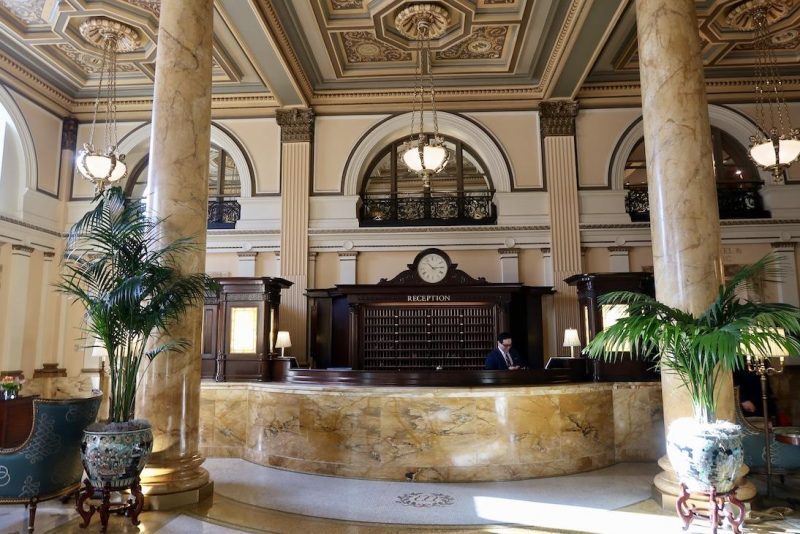 For example, in 1861 a 34-member Peace Congress met at the Willard as a last-ditch effort to avoid the Civil War. Also in 1861, President-elect Abraham Lincoln, due to assassination threats, was smuggled to the Willard, where he lived protected by guards until he moved into the White House.

The Willard also gave rise to a critical DC profession. General (then later, President) Ulysses S. Grant enjoyed having cigars and brandy in the hotel’s lobby. While he was there, men would come up and try to sell things to him. Grant hated this and started referring to the people as “lobbyists.” 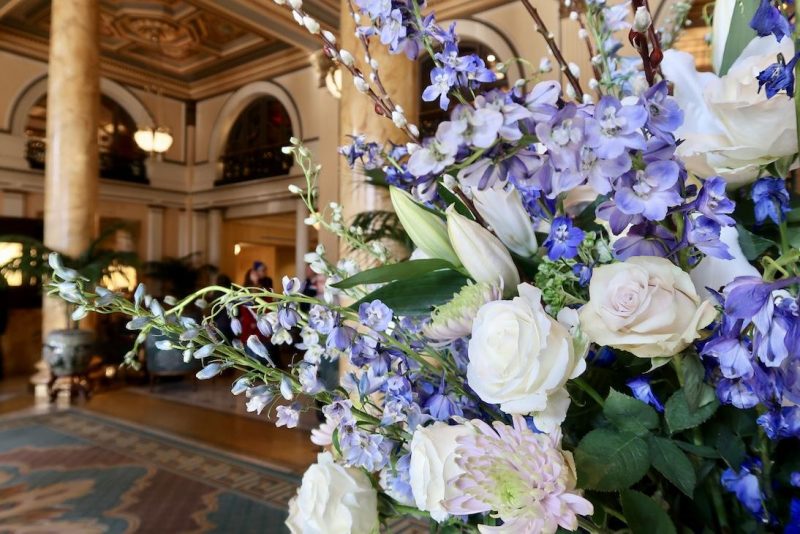 Lobby of The Willard

And if you’re an important person with some writing to finish, the Willard is apparently the place to go. Julia Ward Howe wrote the lyrics to the Battle Hymn of the Republic while staying at the Willard in 1861. Dr. Martin Luther King Jr. wrote his I Have a Dream speech from the Willard in 1963.

If you’re going to have afternoon tea in DC, it should definitely be in the same place where American history was literally written.

Afternoon Tea at the Willard

Afternoon tea at the Willard takes place in what’s called Peacock Alley, an opulent hallway lit by hanging chandeliers and lined with glass doors, red velvet curtains, cream-colored armchairs, and delicate tables set with even more delicate tea sets. When my mom and I arrived, a harpist had just begun strumming a gentle melody from midway down the hallway. 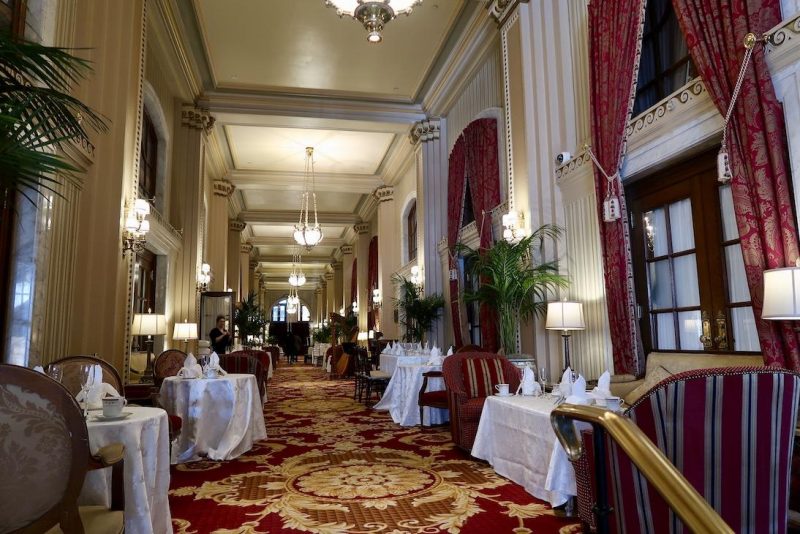 After seating us, our waitress brought out a bottle of champagne. We were certainly off to a great start! She then explained that the only decision we would have to make was which tea we’d like – the sandwiches and scones and pastries listed on the menu would all arrive on our table shortly.

It’s a good thing the tea was the only thing we had to decide on because with a list of dozens of blends made especially for the Willard, choosing a tea was no easy task. The Willard takes pride in its teas, comparing tea cultivation to wine – the soil, harvest method, and leaf shape are all taken into consideration when creating a tea blend. And the Willard settles for nothing but the best.

In the end, I opted for the rich Bourbon Vanilla Rooibos while my mom went with the more delicate Champagne and Berries. Both were completely different but equally delightful. 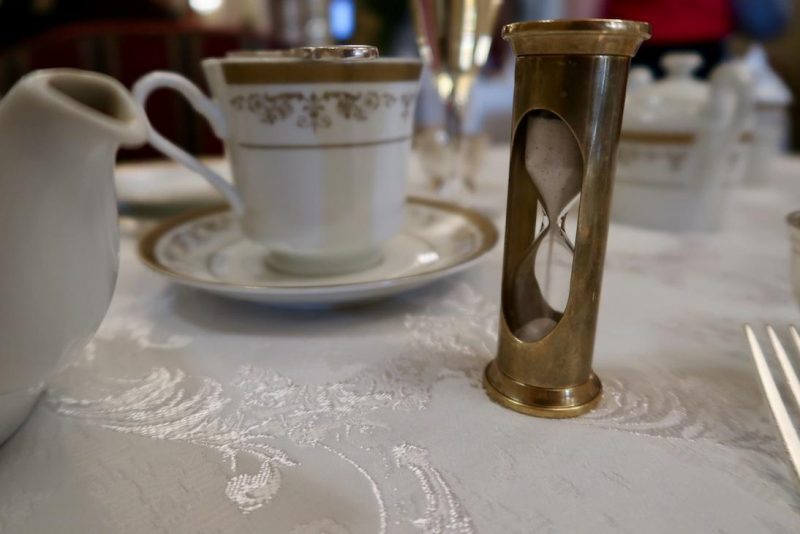 Then came the food. And oh my word, what dainty and delicious food it was! The first tier of sandwiches included duck paté with brandied cherries, a blue cheese and champagne grape tart, Maryland crab salad on a mini sesame bun, and a creamy egg mousse tart topped with caviar. 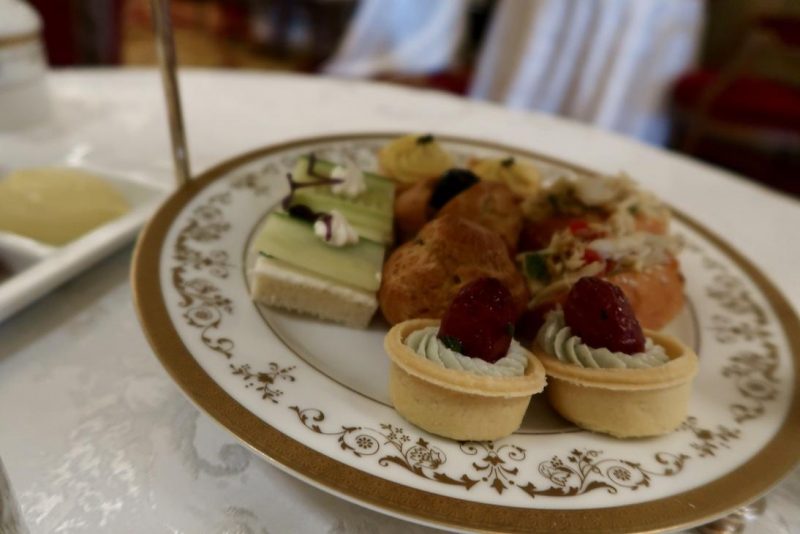 In case that wasn’t decadent enough, the second tier had two different types of scones, bourbon vanilla and Maine blueberry. After all, what’s afternoon tea in DC without scones?! These could be topped with four different housemade spreads, such as lemon curd and Devonshire cream. 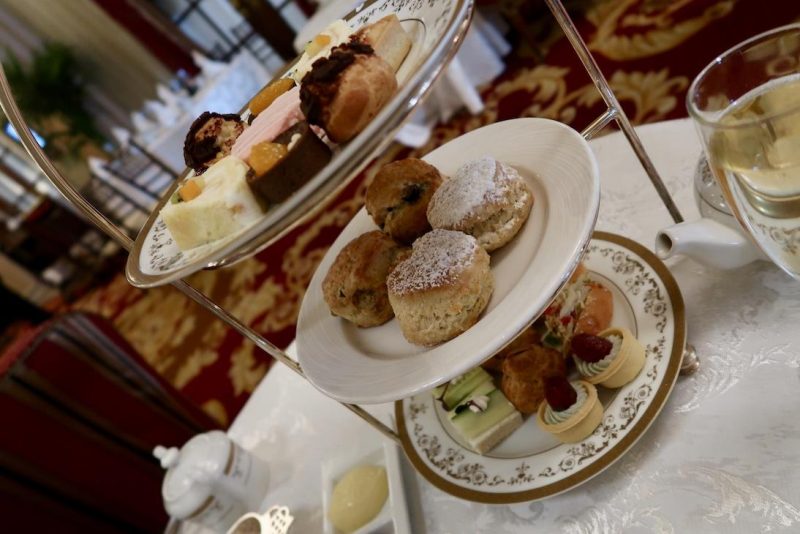 At this point, my mom and I were both completely stuffed and happy. But then the harpist struck up a new chord and the tune of the Happy Birthday song came floating down the hallway. The waiters appeared armed with special desserts for each table celebrating a birthday. Turns out we weren’t the only ones there for that. The way the wait staff recognized the celebrations all at once was a more elegant and unintrusive way to make people feel special than to sing to each table! 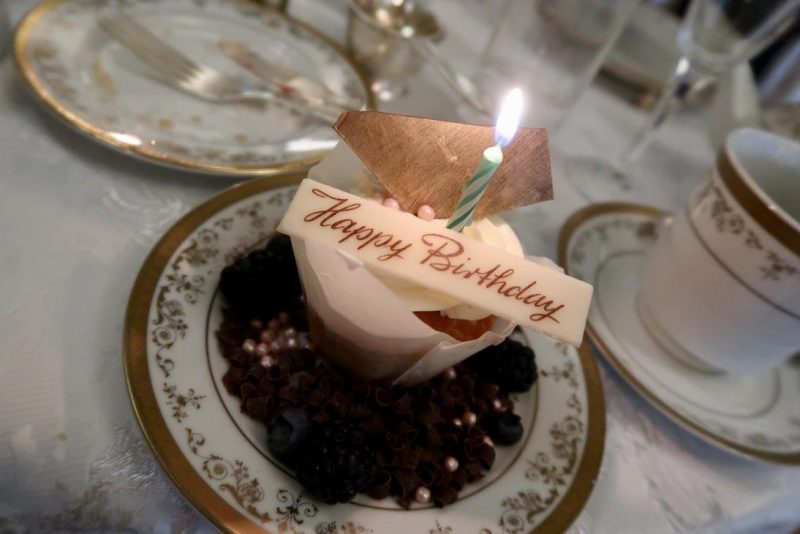 Critics say the Willard has the best afternoon tea in DC, and now I understand why. If you’re planning a special occasion, or just feel like living out your dreams of being royalty for a day, I highly recommend afternoon tea at the Willard!

The Willard only serves afternoon tea in DC on Saturday and Sunday, between 1-4 PM. Reservations are required – you can make them here. If you’re visiting DC to see the cherry blossoms, be sure to check the Willard’s special cherry blossom tea.

Spending Christmas in DC? Be sure to see The Willard’s holiday decorations!

5 Cozy Wineries in Northern Virginia to Visit in the Winter